You are at:Home»Feature Story»Ahmed’s Song, wins GoE Bridging The Borders Award at SHORTFEST

Palm Springs SHORTFEST has announced Ahmed’s Song,  directed by Foued Mansour, as the winner of GoE’s 2019 Bridging the Borders Award, presented by Cinema Without Borders and sponsored by Go Energistics .

This year’s award ceremony festival was held at Grand Ballroom of Riviera Hotel in Palm Springs. The Editor-in-Chief of CWB, Bijan Tehrani, jury member and Executive Director of Neda Nobari Foundation, Keely Badger and representative of award sponsor and Exacutive Director of Go Energistics, Chris Rhea presented the award for this year’s GoE Bridging the Borders  honorable mention and award winner. The winner  received  a cash award of $2500 courtesy of Go Energistics.

In an introduction to the Bridging The Borders Award Bijan Tehrani said: “Hello everyone, it’s a pleasure to be here and participate in celebration of the 25th anniversary of the ShortFest . My name is Bijan Tehrani, Founder and Editor in Chief of Cinema Without Borders, an organization dedicated to international and independent cinema. I’m joined by fellow jury member, Keely Badger, Executive Director of the Neda Nobari Foundation, and our award sponsor, Chris Rhea, Executive Director of GoEnergistics.

Next Keely Badger mentioned nominees and the  honorable mention by the jury members: “Cinema that transcends borders is a field of independent filmmaking that seeks to tell deep human stories that inspire a ‘revolution’ of the heart. These stories capture critical, complex narratives that reflect societal problems, and some of the most fundamental global struggles of our time. This year’s short selection, not surprisingly, took us around the globe – from Vienna to Tel Aviv, Syria to Turkey, and beyond…exploring the diverse themes of displacement, loss of homeland, and identity, as well as, coming-of-age stories, intergenerational trauma, and finding power in something as simple as a mother’s poem.

Each of these talented filmmakers have captured through their lens stories that are deeply rooted in the ideals of social justice, human rights, and everyday empathy for our fellow neighbors, both near and far, in the hope that viewers will not only be informed and inspired, but most importantly, moved to meaningful action.

I’m also honored to present this year’s Bridging The Borders Honorable Mention goes to Green, a short, directed by Suzanne Andreas Correa. Unfortunately the director is not here, but she has sent us a message that I read it for you – Receiving a special mention for the Bridging Borders Award is an honor that aﬃrms what Mustafa and I set out to do when we began our collaboration. GREEN was made by members of two groups targeted by the current U.S. administration — Muslim and Mexican communities. Though an unlikely pairing, it was no accident that we would come together to tell a story about brothers, brotherhood, and the bonds that defy borders and politics. We fought to make this ﬁlm with love and generosity and that is our resistance to the divisive
alternative put forward by those currently in power in many parts of the world. Many thanks to the Palm Springs International Film Society and Short Fest for including us in this incredible festival among so many amazing ﬁlms. Thank you to Go Energistics and Cinema Without Borders for presenting this important award and for recognizing GREEN. My deepest thanks to Mustafa, Michael, Erol, Aziz, Farhad, and Pinar. GREEN owes everything to your unique talents and inspiring gifts. Thank you.”

One day, Ahmed, employed at the public baths in Paris, and nearing retirement, encounters Mike, a teenager, adrift. Inside the bathhouse walls, in a place on the verge of disappearing, a strange relationship will develop between these two-fractured souls. This tale, about the encounter between rigor and rebellion, explores an unlikely bond of friendship that challenges and changes how both men see the world.

GoE Bridging the Borders Award winning film represents everything we love about the notion of bridging borders. Filled throughout with the authentic experience of what it means to be human, to long for belonging, comradery and family, the story bridges nationalities, faiths, generations, worldviews and even music genres, to leave audiences with a sense of enduring hope for a world where borders mean much less and our human bonds mean much more.

I’m thrilled to present the winner film…Ahmed’s Song from France – Directed by Foued Mansour. Eric du Bellay will receive the award on behalf of Foued Mansour”

Eric du Bellay read the award acceptance statement by Foued Mansour for the audience: “First of all, I’m sorry I cannot be here with you, but I think Eric has perfectly represented the film and he keeps doing it; it will cost me a new meal (ça c’est cadeau).
Thanks to the Palm Springs Festival for giving the opportunity to show the film to an audience from around the world.  Thank you to the jury for this award, you do no idea how much it makes me a happy man. This award is the most beautiful of all, sorry for others. We made this film with this desire to bring people and generations together, but also to banish borders and walls, all walls, moral ones or brick and barbed wires.
Thanks again.” 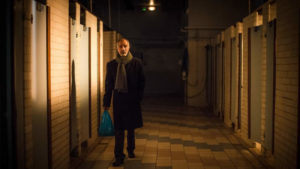 Ahmed’s Song (France)
Written and Directed by Foued Mansour
One day Ahmed, employed at the public baths and nearing retirement, encounters Mike, a teenager adrift. Inside the bathhouse walls, in a place on the verge of disappearing, a strange relationship will develop between these two fractured souls. 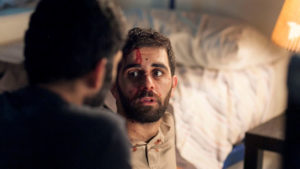 Cinema Without Borders’ jury members to decide the 2019 winner of the GoE Bridging The Borders Award were: 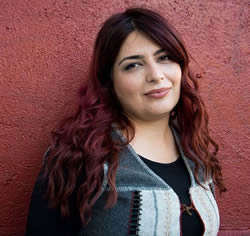 Rokhsareh Ghaem Maghami
Iranian acclaimed filmmaker and two times Sundance winner , Rokhsareh Ghaem Maghami studied filmmaking( BA) and animation( MA) in Tehran ArtUniversity. Her researches on animated documentary resulted to writing a book, named: “Animated Documentary, a New Way to Express”, which was awarded as the best Persian book on film of year 2010 by Iranian house of Cinema. She has made 6 documentaries and won more than 50 international awards. Her movies have been screened in more than 100 Festivals all around the world and broadcasted from more than 15 TV channels. Her main focus in her documentaries is liberating power of art. She makes documentaries about outsider artists in Iran, especially women who try to have a voice through art although they don’t have any education in art and their life circumstances makes it very unlikely to be an artist. Rokhsareh has been a jury member in festivals like IDFA(International documentary festival of Amsterdam), One World Human Rights Festival ( Prague) and Clermont Ferrand short film Festival ( France)

Basil Khalil
Basil Khalil is an Academy Award and Palme d’Or nominated writer and director, born and raised in Nazareth, to a Palestinian father and British-Irish mother. After studying for an MA at Screen Academy Scotland, Basil worked on television productions in London as well as a festivals & marketing consultant to independent filmmakers.

Basil’s Oscar nominated short film AVE MARIA was described by the New York Times as; “The Middle Eastern answer to ‘Curb Your Enthusiasm’.” The film premiered in official competition at the Cannes Film Festival in 2015 before going on to screen at more than 250 film festivals and winning over 35 awards internationally, including the Cinema Without Boarders 1st prize. Basil is a member of AMPAS and sits on the committees that nominate short films and feature animation. 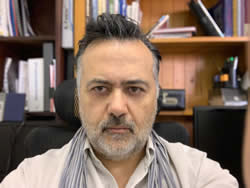 TOM Papas
Tom Papas, has over 21 years’ experience in creative design, project management and stakeholder engagement in arts and media organizations. His expertise in various aspects of festival management include administration, programming, graphic designing, marketing, event and media management and everything from formatting files and editing to writing print and online articles. Tom’s years as festival director have been filled with highlights, introducing many screen and digital media initiatives that engaged thousands of people, from short film competitions to global film challenges that raise awareness, provoke and inspire social change. He combines film programming with other art forms and introduced numerous special focus strands from new media screenings to educational programs.