You are at:Home»Conversations»With Massoud Bakhshi, on his Sundance-Winning YALDA

“Maryam (22) accidentally kills her husband Nasser (65) and is sentenced to death. The only person who can save her is Mona (37), Nasser’s daughter. All Mona has to do is appear on a popular live TV show and forgive Maryam. But forgiveness proves difficult when they are forced to relive the past.” 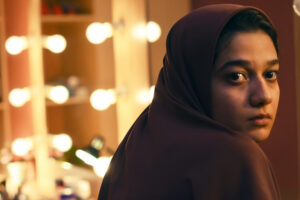 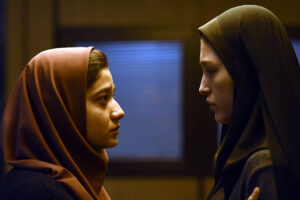 This is the synopsis of Yalda, A Night for Forgiveness, the latest film by Massoud Bakhshi, and the winner of 2020 Sundance Film Festival’s World Cinema Dramatic Competition and the nominee for 2021 Lumières Awards, the French equivalent of Golden Globes.

Hamidreza Nassiri has sat down to talk with him on different aspects of the film, from screenplay to sound, cinematography, mise en scène, editing, and collaborating with an international crew. An interview for filmmakers and film-lovers, alike.

The film is available to watch on virtual cinemas via Film Movement, in time for Yalda, the night of Winter Solstice.

“Born in Tehran, Iran, in 1972, Massoud Bakhshi has worked as film critic, scriptwriter and producer, before making 12 documentaries and short films which were awarded internationally. His first feature film A Respectable Family was selected at Cannes Film Festival 2012 (Quinzaine des réalisatuers). Yalda, A Night for Forgiveness is his second feature film.”

Hamidreza Nassiri is a PhD candidate in Film Studies at the University of Wisconsin-Madison. His dissertation examines the influence of digital technologies in media industries on democracy and social justice on local and global levels, with a focus on Iranian cinema. He also founded and directed the Wisconsin Iranian Film Festival for two years, was the programming director of the first Midwest Video Poetry Festival, and the executive director and jury member at the 3rd Globe International Silent Film Festival. Hamidreza is a filmmaker. His last short film, IMMORTAL (2018) became finalist and semi-finalist in several film festivals. He has taught film production and film studies for years, in college and in community. In 2019, after receiving the Humanities Exchange (HEX) Award, he ran free filmmaking workshops for underrepresented communities in Madison, Wisconsin. In 2021, he ran a free digital storytelling workshop for working class people of color in Madison. He was also the Educational Development Fellow at the Arts + Literature Laboratory, a non-profit dedicated to democratizing art and art education in Dane County, from 2019 to 2020.