You are at:Home»Conversations»A conversation with Viesturs Kairiss about January, Latvia’s Oscar Entry

The story of the January , Latvia’s Oscar entry directed by Viesturs Kairiss happens in 1991 in Latvia and nineteen-year-old aspiring cinematographer Jazis’s whole world is thrown into chaos as he is dragged into the people’s peaceful protests against the Soviet Army’s attempted takeover of power in his country.

January is an autobiographical take on the political upheaval in the early 1990s that changed the lives of the people of the former Soviet Union. Jazis and his friends Anna and Zeps are all aspiring filmmakers, trying to pursue their dreams of making movies and enjoying the freedom of young adulthood, when the collapse of the political system in the region upends their plans, family ties and friendship. Their experience and participation in the nonviolent resistance through the construction of barricades and human shields becomes the defining moment in their coming-of-age.

Viesturs Kairiss is a film director, screenwriter, theatre and opera director from Latvia. Born in Riga in 1971, he graduated from the Latvian Academy of Culture as a cinema and theatre director in 1997. In 1999 he was awarded the title of Best Latvian Theatre Director. His opera “Eugene Onegin” earned him the acclaimed Music Award for Best Opera Production in 1998. He is also an acclaimed director of operas in Germany. The plays and films he has directed have been shown at numerous festivals. “January”, his latest film, won the Best International Narrative Feature award at the Tribeca Film Festival 2022.

The following is our interview with Viesturs Kairiss about making of the January:
Cinema Without Borders: What were the origins of your decision to embark on making “January”?
Viesturs Kairiss: Memories of this time, which I personally experienced myself, and also the idea that now is the right time to look at how we – the Baltics – tried to get rid of the Soviet Union, of Russia. This is still relevant to us. The war in Ukraine only proved that this choice was the right one.

CWB: How challenging was it to interpret the period in which “January” was set? 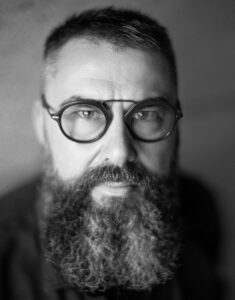 VK: It wasn’t easy. We had to take into account that there was a lot of footage of that time. And Television of Latvia showed it regularly. So we made this radical decision that the film will be mixed with the documentary footage. It was a big challenge because we also filmed a part of the film on an old “Betacam” camera.

CWB: Did you draw from any personal experience in your own life in making this film?
VK: Yes, it’s actually a fairly honest story about the beginning of the cinematographer’s path. That was the way it was – the suspense, incomprehension of what to do, the constant conversations about cinema and also “living” in a cinematographic way. Back then, life was like a cinema, everything happened both in reality and from a cinematic perspective. Cinema and life had blended together.

CWB: The performances in your film are excellent, how did you go about casting and working with your actors?
VK: Working with actors has always been incredibly important to me. It comes from my great theatrical experience. I believe that choosing the right actors is half of the film’s success. I usually searched for the main characters for an excruciatingly long time and tried many. This process helps you to understand what the protagonist must be. Yes, I pay extreme attention to the choice of actors. I have worked together with many actors in other films and theatre. Exploring actors and their abilities has always brought me immense joy.

CWB: How did you decide about the visual style of the film?
VK: Firstly, the visual style of the film was influenced by its story. Secondly, the choice to work together with the distinguished Polish cinematographer Wojciech Staron. Together we thought about how to visualize the story until we decided to use different formats – from 8 mm to “Betacam” video. It is an extremely radical amplitude, which nevertheless suited the story of the film – combining Soviet intimacy and the dynamics of cinematography in one cinematic canva.

CWB: How do you feel about being chosen to represent Latvia at the Oscars?
VK: I feel good, it’s happening for the second time. I am delighted that members of The Academy of Motion Picture Arts and Sciences have seen the film. I know our film can cause an emotional and intellectual resonance. That, of course, is the goal of any film.

CWB: How has “January” been received by film critics and audiences so far?
VK: The film has had an extremely glamorous path, it has won major awards in Tribeca, Rome and Warsaw. It is widely viewed in Latvian cinemas. Perhaps it is the most described film in Latvia’s history, there have been many reviews both in the USA and Europe and, of course, in Latvia. I can only feel deep satisfaction about this process.