You are at:Home»News»Vera Mijojlic honored at West Hollywood’s Women in Leadership Awards

Cultural entrepreneur Vera Mijojlic, the founder and director of the South East European Film Festival in Los Angeles, was among five women who were honored at West Hollywood’s 23rd annual Women in Leadership Awards event on Wednesday, April 28. The Award was presented to her by Jamie Adler, designer and business leader, and daughter of Phyllis Morris. 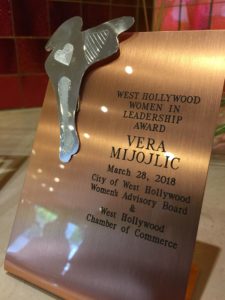 “This award is a recognition for the entire SEEfest team which makes the festival possible, and I share it with all of them,” says Mijojlic. “I am personally honored to receive the award named after a pioneering business woman, Phyllis Morris, who was a trailblazer and a creative force in this City.”

Established in 1996, the Women in Leadership Awards and Reception is a recognition ceremony acknowledging the achievements of local women in the professional and commercial/industrial business community, sponsored by the West Hollywood Women’s Advisory Board and the West Hollywood Chamber of Commerce as part of Women’s History Month.  Members of the West Hollywood City Council as well as many local business and community leaders were in attendance at the awards reception.

Festival passes, and tickets to pre-festival events are available on eventbrite/SEEfest.