You are at:Home»News»Venice 2020 in competition line up

Venice Film Festival 2020, is the first major film festival happening with the audiences and filmmakers presence since Covid-19 hit the our planet. This brings hope back to our lives as fans of art of cinema. Venice Film Festival closing will be on coming Saturday and award winners will be announced.

The list of films in competition in 2020 Venice Film Festival is amazing:

In Between Dying
Davud is a misunderstood, restless young man in search of his “true” family, those whom he feels certain will bring meaning and love to his life. When, over the course of one day, he experiences an unexpected series of accidents with people that each time results in a death, invisible memories, narratives and concerns rise to the surface. Davud is propelled into a journey of discovery, failing to recognise his “missing half” again and again, until he finally comes to accept that living in danger is his fate, that death will always be stronger than his own narratives, and that shedding them is his initiation into entering life more fully. Set on the path of becoming, Davud ultimately returns to the place where he has always lived. There, he finds Love is waiting for him. But perhaps it is too late.

LE SORELLE MACALUSO (THE MACALUSO SISTERS)
Maria, Pinuccia, Lia, Katia, Antonella. The childhood, adulthood and old age of five sisters born and raised in an apartment on the top floor of a small block in the suburbs of Palermo, where they live alone, without their parents. A home that bears the marks of the time that passes, as do those who have grown up in it and still live there. The story of five women, of a family, of who goes, who remains and who resists.

THE WORLD TO COME
In upstate New York in the 1850s, Abigail begins a new year on the rural farm where she lives with her husband Dyer. As Abigail considers the year to come through her journal entries, we experience the marked contrast between her deliberate, stoic manner and her unravelling complex emotions. Spring arrives and Abigail meets Tallie, an emotionally frank and arrestingly beautiful newcomer renting a neighbouring farm with her husband, Finney. The two strike up a tentative relationship, filling a void in their lives which neither knew existed.
We follow the progress of the two women’s increased intimacy and passionate devotion to one another, even as they begin to register that they have no model for this new state in which they find themselves. As both husbands come to terms with the intensity of their wives’ connection—Dyer’s wounded feelings and Finney’s jealous vindictiveness—events climax with Finney’s decision to move Tallie away, and Abigail’s determination to pursue her lost kindred spirit.

NUEVO ORDEN
In this riveting, suspenseful dystopian drama, a lavish upper-class wedding goes awry in an unexpected uprising of class warfare that gives way to a violent coup d’etat. As seen through the eyes of the sympathetic young bride and the servants who work for- and against- her wealthy family, Nuevo Orden breathlessly traces the collapse of one political system as a more harrowing replacement springs up in its wake. 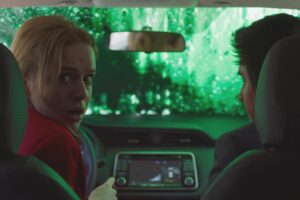 AMANTS (LOVERS)
Lisa and Simon are inseparable. They have been passionate about each other since they were teenagers. A tragedy occurs, provoked by Simon’s criminal activities. He is in danger and flees. Without Lisa. She waits in vain for news from him. Three years later, she is married to Leo when their paths cross again on an island in the Indian Ocean.

LAILA IN HAIFA
Over the course of one night, we witness the interweaving stories of five women through a series of encounters and situations, defying all categories and labels in their relationships and personal identities. With an ensemble cast of both Israeli and Palestinian actors, Laila in Haifa is a drama with wry humor set over one night in a club in the port town of Haifa. The film presents a candid snapshot of contemporary life in one of the last remaining spaces where Israelis and Palestinians come together to engage in face-to-face relationships. The club itself is vital to the fabric of the film.
Amos Gitai delivers a sensitive and distinctly humanist reflection of life in the region. Laila in Haifa is a lieu de rencontres, a moment of dialogue, in a region that otherwise suffers from chronic violence and hatred. Posing the questions: how can the arts create a space in which people can express their different identities but are looking for ways of mutual and peaceful coexistence? How can the language of cinema using juxtaposition of fragments of stories create a common human tissue?

UND MORGEN DIE GANZE WELT (AND TOMORROW THE ENTIRE WORLD)
Germany is struck by a violent series of racist terror attacks. 20-year-old Luisa joins a subdivision of the Antifa to oppose the uprising neo-Nazi movement. With her reckless actions, she not only fights against the extreme right but also tries to impress Alfa, an Antifa activist she is secretly in love with. Soon, things escalate, and Luisa and her friends clash over the question if violence could ever be a legitimate political answer to fascism and hatred. 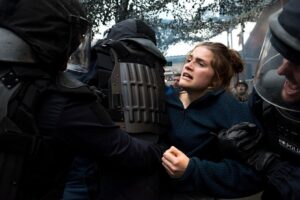 DOROGIE TOVARISCHI! (DEAR COMRADES!)
USSR, Novocherkassk, 1962. Lyudmila is a member of the local Communist Party. She’s a staunch upholder of the Communist regime and ideals and despises any form of dissent. During a labour strike at the local electromotive factory, she witnesses the shooting on the protesters by the Army sent by the government to quell the strike: a massacre. An event that will change her vision of the world forever. The city is torn apart by riots, arrests, hasty convictions and by the curfew. Many people are injured and several ones are missing. Precisely in those days Lyudmila’s daughter disappears into thin air and the woman starts an anguished, dangerous and relentless search, in spite of the blockade of the city, the arrests and the attempt at a cover-up by the authorities. The movie is based on a true story that happened on June 2nd, 1962 in Novocherkassk and kept secret until the Nineties. The investigation was started in 1992. The victims were secretly buried in graves under fake names so they could never be found. Major suspects among the top Soviet officials were dead at that time. Culprits have never been convicted.

SPY NO TSUMA (WIFE OF A SPY)
The year is 1940 in Kobe, the night before the outbreak of World War II. Local merchant, Yusaku Fukuhara, senses that things are headed in an unsettling direction. He leaves his wife Satoko behind and travels to Manchuria. There, he coincidentally witnesses a barbarous act and is determined to bring it to light. He leaps into action. Meanwhile, Satoko is called on by her childhood friend and military policeman, Taiji Tsumori. He tells her that a woman her husband brought back from Manchuria has died. Satoko is torn by jealousy and confronts Yusaku. But when she discovers Yusaku’s true intentions, she does the unthinkable to ensure his safety and their happiness.

KHORSHID (SUN CHILDREN)
This is the story of 12-year-old Ali and his three friends. Together they work hard to survive and support their families, doing small jobs in a garage and committing petty crimes to make fast money. In a turn of events that seems miraculous, Ali is entrusted to find a hidden treasure underground. He recruits his gang, but first, to gain access to the tunnel, the children must enroll at the Sun School, a charitable institution that tries to educate street kids and child laborers, close to where the treasure is located.

PIECES OF A WOMAN
Martha and Sean Carson are a Boston couple on the verge of parenthood whose lives change irrevocably during a home birth at the hands of a flustered midwife, who faces charges of criminal negligence. Thus begins a year-long odyssey for Martha, who must navigate her grief while working through fractious relationships with her husband and her domineering mother, along with the publicly vilified midwife whom she must face in court. Pieces of a Woman is a deeply personal, searing domestic aria in exquisite shades of grey and an ultimately transcendent story of a woman learning to live alongside her loss.

MISS MARX
Bright, intelligent, passionate and free, Eleanor is Karl Marx’s youngest daughter. Among the first women to link the themes of feminism and socialism, she takes part in the workers’ battles and fights for women’s rights and the abolition of child labor. In 1883 she meets Edward Aveling and her life is crushed by a passionate but tragic love story.

PADRENOSTRO
Rome, 1976. Valerio is ten years old and has a lively imagination. His life as a child is turned upside down when, with his mother Gina, he witnesses an attack on his father Alfonso by a terrorist group. From that moment on, fear and a sense of vulnerability leave a dramatic mark on the feelings of the whole family. But it is precisely in those difficult days that Valerio gets to know Christian, a boy not much older than him. Solitary, rebellious and shameless, he seems to have appeared out of nowhere. That meeting, in a summer filled with discoveries, will change their lives forever.

NOTTURNO
Notturno, shot over three years in the Middle East, on the borders between Iraq, Kurdistan, Syria and Lebanon, recounts the everyday life that lies behind the continuing tragedy of civil wars, ferocious dictatorships, foreign invasions and interference, up to the murderous apocalypse of ISIS. Different stories to which the narration confers a unity that goes beyond geographical divisions. All around and in people’s consciousness, signs of violence and destruction; but in the foreground is the humanity that reawakens every day from a “nocturne” that seems infinite. Notturno is a film of light made of the dark material of history.

ŚNIEGU JUŻ NIGDY NIE BĘDZIE (NEVER GONNA SNOW AGAIN)
A masseur from the East enters the lives of the rich residents of a bland, walled off community. Despite their wealth, the residents emit an inner sadness, a longing. The mysterious newcomer’s hands heal, his eyes seem to penetrate their souls. To them, his Russian accent sounds like a song from the past, a memory of their seemingly safer childhood. Zhenia, for this is his name, changes their lives.

THE DISCIPLE
Sharad Nerulkar has devoted himself to becoming an Indian classical vocalist, a lifelong quest in which few succeed. Initiated into this centuries-old tradition by his father, he follows his dream with sincerity and discipline, committing himself entirely to his artistic journey. As he strives to attain the highest level of his craft, Sharad traces his way through the hallowed mysteries and rituals of past musical legends. But as the years pass, Sharad will be forced to negotiate between the complex realities of life in contemporary Mumbai and his chosen path, leading him to find his true voice in music and in life.

QUO VADIS, AIDA?
Bosnia, July 1995. Aida is a translator for the UN in the small town of Srebrenica. When the Serbian army takes over the town, her family is among the thousands of citizens looking for shelter in the UN camp. As an insider to the negotiations Aida has access to crucial information that she needs to interpret. What is at the horizon for her family and people—rescue or death? Which move should she take?

NOMADLAND
Following the economic collapse of a company town in rural Nevada, Fern packs her van and sets off on the road exploring a life outside of conventional society as a modern-day nomad. Nomadland features real nomads Linda May, Swankie and Bob Wells as Fern’s mentors and comrades in her exploration through the vast landscape of the American West.