UCLA Film Archive continues its long tradition of celebrating the best cinema from Iran and the Iranian diaspora with the latest edition of its annual survey of works by Iranian filmmakers, past and present. This year, the program illuminates the latest cinematic trends with several comedies and outright satires appearing in the lineup alongside gripping dramas and documentaries that explore the complex realities of Iran’s contemporary moment and the difficult history that shaped it. UCLA presents new restorations of two landmark works by two founding filmmakers of the pre-revolution Iranian New Wave, Forough Farrokhzad and Ebrahim Golestan, whose significant contributions have been overlooked owing to the inaccessibility of their films. This year the Archive includes among the program’s feature films, a selection of prize-winning short films from the 2018 edition of the Farhang Foundation Short Film Festival, among other short works presented over the course the series. As in past years, it is anticipated that some filmmakers will appear in person, wherever possible, to discuss their work.
All films from Iran and in Farsi with English subtitles.

April 27, 2019 – 7:30 pm
Tariki (Iran, 2018) Umbra
A young woman walks out into the street at night in search of her lover but encounters a mysterious, threatening stranger instead in this short that premiered at Cannes in 2018.
DCP, color, 15 min. Director: Saeed Jafarian. Screenwriter: S. Jafarian Fatemeh Abdoli. Cast: Mahsa Alafar Banipal Shoomoon.

April 28, 2019 – 3:00 pm
Sly (Iran, 2018) Marmouz
Political satires are rare in Iranian cinema—to say the least—so it’s especially refreshing to come across one as openly and broadly comical as Sly. Qodrat (Behdad) dreams of high office while delivering fiery conservative speeches in his garage to a handful of oddball followers. When a twist of fate launches him into the political mainstream, his increasingly off-the-wall positions threaten to expose the corruption of the whole system.
DCP, color, 90 min. Director: Kamal Tabrizi. Screenwriter: Aidin Sayar Sarie. Cast: Hamed Behdad, Vishka Asayesh, Azadeh Samadi.

April 28, 2019 – 7:00 pm
Temporary (Iran, 2018)
Farhang Foundation Short Film Festival Finalist. Shot with a piercing frankness, Temporary confronts us with the hard choices to made by a young, single mother and the willingness of a religious establishment to condone her exploitation.
DCP, color, 16 min. Directed by Behzad Azadi. Screenwriter: Behzad Azadi.

Hendi and Hormoz (Iran, 2018) Hendi va Hormoz
Rugged and delicate beauty exist side-by-side on the red sand island of Hormuz in the Persian Gulf where 13-year-old Hendi is married off to the 16-year-old Hormoz on his promise of a job at the local mine. When the job falls through, the young couple must struggle to make their way against difficult odds in a land as spellbinding as it is unforgiving.
DCP, color, 88 min. Director Abbas Amini. Screenwriter: Hossein Farrokhzadeh, A. Amini. Cast: Hamed Alipour, Zohreh Eslam, Asma Daneh-chin. 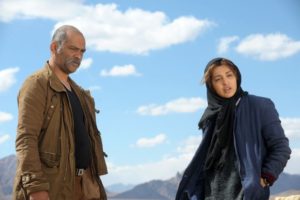 Sunset Truck (Iran, 2018) Yek Camion Ghoroob
Deep in the desert, a multi-generational family operates a vacation oasis for wanderers and dreamers who come to experience what it’s new social media campaign promises are the most spectacular sunsets in the world. When Sayeh, a young woman with a secret arrives, however, trouble comes following and the camp’s ragged band of romantics are confronted by the realities of a world they hoped to leave behind.
DCP, color, 81 min. Director: Abolfazl Saffary. Screenwriter: A. Saffary, Sajad Afsharian. Cast: Pejman Bazeghi, Roshanak Gerami, Nader Fallah.

May 4, 2019 – 3:00 pm
Scent of Geranium (Iran, 2018)
Farhang Foundation Short Film Festival Finalist. A young woman reflects on her mother’s gardening lessons in Tehran as a path to understanding and accepting her own experience as an immigrant in director Naghmeh Farzaneh’s wonderfully animated short.
DCP, color, 5 min. Director: Naghmeh Farzaneh.

Before Summer Ends (Iran, 2017)
Director Maryam Goormaghtigh weaves a most beguiling blend of fiction and non-fiction in this semi-documentary feature about a trio of Iranian expat bros who take a road trip through the shimmering French countryside before one of their own returns to Iran. The expected riffs on male obsessions—women, partying, women—come finer-edged with melancholy, regret and loneliness as the friends also reflect on their lives in self-imposed exile.
DCP, color, 102 min. Director: Maryam Goormaghtigh. Cast: Arash, Ashkan, Hossein.

May 4, 2019 – 7:30 pm
Turquoise (Iran, 2018) Firouzeh
Farhang Foundation Short Film Festival Finalist. The residents of a rural village are infected with greed and paranoia when rumors of buried treasure drive them to tear up their own fields and eventually turn on each other but what seems like a case of local madness proves a much larger mystery.
DCP, color, 15 min. Director: Roozbeh Misaghi. Screenwriter: Sama Raufi, Roozbeh Misaghi.

Sheeple (Iran, 2018) Maghz-haye Koochak Zang-Zadeh
Navid Mohammadzadeh stars as the slow-witted, grasping brother of Shakur (Aslani), a meth dealer and procurer who acts as reigning patriarch for both their impoverished neighborhood and their highly dysfunctional family. When rumors about their sister are exposed, a violent, domestic power struggle breaks into the open. Writer-director Hooman Seyedi doesn’t pull any punches in this sordid tale of corruption that culminates in one of the best action set pieces in contemporary Iranian cinema.
DCP, color, 102 min. Director: Hooman Seyedi. Screenwriter: Hooman Seyedi. Cast: Navid Mohammadzadeh, Farhad Aslani, Farid Sajjadi Hosseini.

May 5, 2019 – 7:00 pm
Waterfolks (Iran, 2018)
Every day for 20 years, Sakineh has gone fishing, often with her friend Sobra, to make a living for their families. They are two members of a small community of fisherwomen on Hangam Island in the the Persian Gulf who are the subject of Azadeh Bizgariti’s intimate and beautiful documentary. Winner of the best short documentary film from Cinema Verite Tehran.
DCP, color, 30 min. Director: Azadeh Bizargiti.

Ali Aqa (Switzerland/Iran, 2017)
In his previous works Dingomaro and My Name Is Negahdar Jamali and I Make Westerns— which screened in the 2014 and 2015 UCLA Celebration of Iranian Cinema—documentarian Kamran Heidari established a reputation as a peerless cinematic portraitist of eccentricity. With Ali Aqa, Heidari turns his penetrating but empathetic lens on an aging pigeon fancier whose hobby has become an all-consuming obsession.
DCP, color, 82 min. Director: Kamran Heidari.

May 10, 2019 – 7:30 pm
Bomb, A Love Story (Iran, 2018) Bomb, Yek Asheghaneh
The epic scope and cinematic ambition of writer-director Payman Maadi’s second feature (following Snow on the Pines which screened in the 2014 UCLA Celebration of Iranian Cinema) is evident right from the beginning: a brazura tracking shot through a bustling, rain swept, nostalgic city set that culminates in a scene of horror. This is life in Tehran circa 1988 during the Iran-Iraq War. Maadi and Leila Hatami star as a husband and wife whose personal tragedy becomes entangled in the larger violence surrounding them and the residents of their apartment building whose lives become a prism through which Maadi explores this traumatic period of Iranian history.
DCP, color, 97 min. Director: Payman Maadi. Screenwriter: Payman Maadi. Cast: Leila Hatami, Payman Maadi, Siamak Ansari.

May 11, 2019 – 3:00 pm – Free Admission
Ill Fate (Iran, 2018)
This long-overdue documentary explores the role and image of women in Iranian cinema from its beginnings around 1900 up to the year of the Revolution. Fascinating research and insight illuminates dozens of clips from rare and classic titles.
DCP, color and b/w, 88 min. Director: Sahar Khoshnam.

May 11, 2019 – 7:30 pm
The House is Black (Iran, 1962) Khaneh siah ast
Forough Farrokhzad was already one of Iran’s leading contemporary poets—as well as its most controversial—when she started work on this short documentary about a leper colony in Tabriz with the support of filmmaker Ebrahim Golestan who acted as her producer. Farrokhzad’s only film before her untimely death in 1967, The House is Black is a landmark work of lyrical power and humanity that helped launch the Iranian New Wave in the decade before the revolution.
35mm, b/w, 20 min. Director: Forough Farrokhzad. Screenwriter: Forough Farrokhzad. Restored by the Austrian Film Museum and the International Short Film Festival Oberhausen. Print courtesy of the International Short Film Festival Oberhausen.

Dawn of the Cold Season (Iran, 2015)
Internationally renowned performance artist Sussan Deyhim created a series of four video installations inspired by her personal meditations on Forough Farrokhzad’s life and the potent feminism of her poetry as part of her mixed media performance Dawn of the Cold Season. We present those video works here before an incisive conversation between Deyhim and one of her key collaborators, Prof. Ahmad Karimi-Hakkak, on the contemporary resonance of Farrokhzad’s work and legacy.
DCP, color & b/w, 9 min.

Brick and Mirror (Iran, 1964) Khesht va Ayeneh
Painstakingly restored from the original camera negative, outtakes and a surviving release print, Brick and Mirror returns to the big screen to take its rightful place as a milestone of Iranian and international post-war cinema. Already a giant of letters in Iran, writer-director Ebrahim Golestan turned to documentary filmmaking in the early 1960s and Brick and Mirror has an urgent street-level feel. After a taxi driver discovers a baby abandoned in the back seat of his cab (the desperate mother played by Forough Farrokhzad), he frantically hunts for a way to pass it on. Over a single long night, his search grows increasingly allegorical as it reveals a self-satisfied, corrupt urban elite and intellectual class unable to grasp the roots of its own demise.
DCP, b/w, 126 min. Director: Ebrahim Golestan. Screenwriter: Ebrahim Golestan. Cast: Taji Ahmadi, Zackaria Hashemi, Goli Bozorgmehr.
Restored by the Cineteca di Bologna.

All screenings will be held in Billy Wilder Theater