You are at:Home»News»Touran Khanom from November 20th at Virtual Cinema

Touran Khanom is an Iranian documentary about the life of legendary Touran Mirhadi — the preeminent architect of the childhood institution in Iran — strives to follow through with her vision of “Peace needs to be cultivated at childhood” in the last four years of her life.

Now you can watch this amazing and beautiful film, Touran Khanom on-line.

Touran Mirhadi was born to a German mother and an Iranian father in Tehran. When, in 1945, and with the start of Iran’s illiteracy campaign, pioneering educators were inviting a younger generation to help with the effort, Touran Mirhadi was at the forefront. She picked up the ABCs of child education and picked out how the educational system came about. She went to France in 1946 and studied Educational Psychology at Sorbonne and Early Childhood Education at College Sevigne. The fruit of her studies was a new way of looking at child education.

Upon returning to Iran, she founded Farhad School (1955-1980), an independent kindergarten and, later, middle school named after her late brother. Farhad was a progressive institution that nurtured many outstanding students. At a time when it was almost impossible to go against the main current of the educational system, Mirhadi broke with schooling based on competition and encouraged teachers to see growth as the ability of each student to develop according to her or his talents and needs. At Farhad, the library played a central role and the relationship between teacher and student formed around books that fostered scientific precision and thinking.

In 1962, along with some of her colleagues, she founded the Children’s Book Council (CBC) with the aim of supporting the production and publication of quality books for children and young adults. CBC is an independent, non-profit, research-based cultural institution whose members are mostly women and volunteers. The Council has 1000 members today and covers its expenses through membership subscriptions, public support, commissions, and proceeds from the sales of its publications.

Chief among these publications is the Encyclopedia for Young People, a monumental reference book for children and young adults. It is the first pictorial encyclopedia for the 10-16 age range group. Work on the Encyclopedia started in 1980 and has continued with the contributions of over 250 scholars, working voluntarily. The Encyclopedia has now XVII volumes.
“Peace is to be learned-lived at childhood,” maintained Touran Mirhadi and she lived this wisdom in her 89 years. She has many books and articles to her name. In addition to CBC, she has been directly involved with the establishment of 20 institutions and has supported a dozen others for children. No wonder, then, she is known as the godmother of progressive education in Iran. 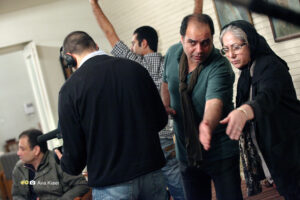 Filmmakers:
Rakhshan Banietemad graduated in film directing from the University of Dramatic Arts in 1980, when she made a name for herself in Iranian cinema with her film Off the Limits, Nargess, made in 1991, with its courageous subject, established Banietemad as a leading filmmaker with social concerns in Iranian cinema, and brought her not only the best directing award at the Fajr Film Festival, but also helped her to gain a strong footing for making her following films. Yellow Canary, Foreign Currency, The Blue-Veiled, The May Lady, Under the Skin of the City, Gilaneh, Mainline, and Tales are among other works by Banietemad that have earned her awards and prizes including: First Prize at the Comic Films Festival (Italy), the International Critics Award at Salonika (Greece), the prize for the Best Asian Female Director at the Delhi Film Festival, the Jury Prize at the Moscow Film Festival, the NETPAC First Prize at the Karlovy Vary Film Festival, the Jury Prize at the Las Palmas Film Festival, the Award for Best Direction from the Asian Pacific Academy, the award for the Best Script at the Venice Film Festival, and an Honorary Doctorate from London University.

But this does not represent the full scope of Banietemad’s filmmaking. In addition to presenting several instructional workshops, she has directed and produced important documentary films such as To Whom Do You Show These Films? , Kahrizak: Four Views, Angels of the House of Sun, We Are Half of Iran’s Population, Our Times, All My Trees, and Hey, Humans.

Mojtaba Mirtahmasb is a renowned Iranian documentary filmmakers. Having graduated with a BA in Craft Design from the Art University, he started making films in 1990. He has conducted research, scriptwriting, directing and producing for more than 40 documentary films, including Touran Khanom, Six Centuries Six Years, This Is Not a Film, Lady of the Roses, Off Beat, Back Vocal, The River Still Has Fish and The Banner. This Is Not a Film was the outcome of a directorial and production partnership with Jafar Panahi. It was first premiered at the 64th Cannes Film Festival (Official Selection) and was on the short list for the best documentary for the 2012 Oscar.

Mirtahmasb was Member of the Board of Directors of the Iranian Documentary Filmmakers Association (IRDFA) for six years, serving two years as its chairperson. He is one of the founding members of Tehran Province Documentary Filmmakers’ Guild. In recent years, alongside researching and directing his own films, he has been conceiving and producing film projects, chief among them the Karestan Documentary Film Series.