You are at:Home»Festivals»Those Who Remained, Hungarian Oscar Entry at Hungarian Film Festival LA

Those Who Remained, Hungarian Official Entry  for the Best International Feature Film 2020 Academy Awards
tells the story of Aldo and Klara. Having survived the camps. 42-year old Aldo lives a solitary life as a doctor in Budapest. 16-year old Klara lives reluctantly with her great-aunt, holding on to hope that her father and mother will return. She meets Aldo, and soon the two of them find something in each other that has long been absent in their lives.

As they grow closer and closer, the joy in both of their lives slowly returns. But as the Soviet Empire rises to power in Hungary, their pure and loving father-daughter relationship is misunderstood and frowned upon.
A lyrical story of the healing power of love in the midst of conflict, loss and trauma,Those Who Remained reveals the healing process of Holocaust survivors through the eyes of a young girl in post-World War II Hungary.

Those who Remained will be screened at the Hungarian Film Festival of Los Angeles on November 14th. We had the opportunity of interviewing Barnabás Tóth, director of Those Who Remained on camera: 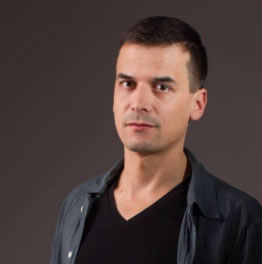 Born 1977 in Strasbourg, Barnabas Toth studied at the Film and Television Academy of Budapest.

He wrote and directed two feature films, “Camembert Rose” (Rózsaszín sajt) in 2009 and “Those Who Remained” (Akik maradtak) in 2019.

His recent short film “Chuchotage” (Susotázs) (2018) was selected to the shortlist by the Academy of Motion Picture Arts and Sciences for the 2019 Academy Awards. It won 23 awards at 62 different
film festivals. His short film “My Guide” (Újratervezés) (2013) has been viewed over 1.8 million times on Vimeo, making it one of the most successful short films ever made in Hungary. As a director, he directed episodes of “Született lúzer” for HBO in 2007, of “Csalfa Karma” for Life Network in 2011 and of “A mi kis falunk” for RTL Klub in 2018.