Too bad if before leaving this world, we have done nothing to cure its sickness…
*
Last week using a favor of my dear friend, Bijan Emkanian, the well known Iranian actor, producer,  I went to see the “Thirty” a play/concert.

Among well dressed men and women and in the midst of the kind last summer night breeze that caress your skin set to watch a miracle.

The very first moments the magic of “ Sohrab Nazeri” ‘s magnificent hands playing Setar, made me hold my breath and I was trapped in the spell of Homayoun Shajarian’s beautiful voice.

Saber Abbar narrates as Zahak The Serpent King and the rest of the actors portray stories from Shahnameh* on the huge theater stage.

Could you be an Iranian and you have no knowledge of Shahnameh? For many Shahnameh is a mythological story….but here you witness a romantic version of Roudabe and Zall love story…..and within this world and atmosphere you feel the meaning of true love by all its glory. Zel played masterfully by Bahram Radan says “I have been born old…”

Can you be an Iranian and have no memory of the darkest and most unpredictable tragedy of all times for a father in Rostam and Sohrab**, and how Ferdousi paints this bitter picture with words….
*
For hours I was fascinated by the amazing harmony of the costumes, makeup, lighting, sound, musical performances and …. The silky voice of Homayoun Shajarian and ……
* 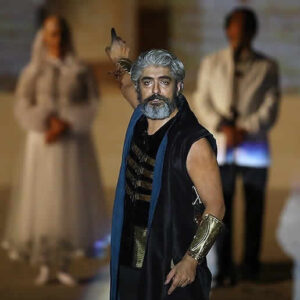 “Thirty” play/concert is a unique event in Iran’s theatrical history… we had noting like that before, but I hope for more in the future.

Shahnamhe is a long epic poem written by the Persian poet Ferdowsi between c. 977 and 1010 CE and is the national epic of Greater Iran. Consisting of some 50,000 “distichs” or couplets (2-line verses),[1] the Shahnameh is the world’s longest epic poem written by a single poet. It tells mainly the mythical and to some extent the historical past of the Persian Empire from the creation of the world until the Islamic conquest of Persia in the 7th century.