THE STEED, the official international feature film Oscar entry from Mongolia for the 92nd Academy Awards and entry for the 77th Annual Golden Globes 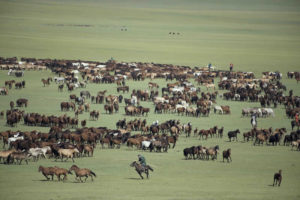 THE STEED tells the tale of a young boy who braves betrayal, brutality and war in his bold, relentless quest to reunite with his horse after being separated in the vast majestic lands of Mongolia during the aftermath of the Russian revolution. Love, family, devotion, kinship and love of homeland are at the heart of this epic sweeping drama from acclaimed Mongolian director Erdenbileg Ganbold that took over three years to make. Utilizing thousands of horses and herd animals along with support from local tribes, THE STEED was a labor of love for everyone involved and a monumental undertaking. THE STEED IS the fourth film to be submitted by Mongolia to the Oscars since 2003 and is produced by Trevor Morgan Doyle and Alexa Khan, one of the few female producers in the country.

THE STEED won the Spirit of Cinema Award at the 26th Oldenburg Film Festival and the Best Feature Film at the 23rd San Diego International Film Festival.

Cinema Without Borders: Why did you decide to make THE STEED?
Erdenbileg Ganbold : As a creator, I decided to portray our Mongolian culture, the importance of our land and mother earth through a tale of a horse and his best friend. Therefore, “The Steed” was created. It is hard to imagine Mongolians without their horse. Our horses were the reason Ghenghis Khan was able to conquer two thirds of the known world and they are the basis for our economy and backbone of our culture. They accomplished our political and domestic work for us. During World War II, many horses were gifted to the Soviet Union and they helped to bring victory to them. There is even a monument to Mongolian horses depicting them carrying a cannon in Russia. Although warfare and Imperial expansion are important parts of our history with our horses, it is important to remember we are a nation of nomad herders. Our national symbol is a horse and we are a nation of horses. Our connection to this animal is vital. They are not just transportation, they are life itself. We are connected to them and our lives are intertwined. 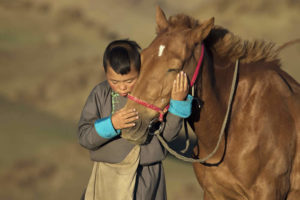 CWB: Can you tell us about the inspiration for THE STEED. Where did the idea come from and how did the film come to be made?
EG: The Steed “Khiimori” was made based on an award winning famous poem written in 1962, called Brown Horse by Mongolian National poet laureate Ch. Lkhamsuren. This poem was taught in school during the socialist era and learning this poem in high school gave me a lot of inspiration. Also, Mongolians are moving away from the nomadic culture and the traditional ways are quickly disappearing and this was also my concern and one of the reasons to make the film.

CWB: How challenging was making this film?
EG: It was definitely challenging. Everyone in Mongolia knows the poem well and and it has received Mongolia’s highest awards. Making this into a film comes with great expectations and required bravery to make knowing my country is watching and I felt it was my duty to make it very well. The most challenging part was working with a child and an animal. It was very difficult for one horse to have many expressions. We had 4 horses playing as Rusty to accomplish this well and keep the horses healthy and happy. I am very thankful to my horse trainers Altangadas and Tsogtkhuu. I am also very thankful and proud of our young lead actor Ariunbold Erdenebayar for taking on such a big challenge and doing it very well. I am grateful for all our international team members from the US, Russia, Kazakhstan, Ukraine, China and Malaysia especially my producing partners Alexa Khan and Trevor Doyle. Because Mongolia is not yet able to create 5.1 dolby digital surround sound, I am grateful to Willy Allen and his team for the sound design. Over 100 musicians of the orchestra played the sound live and that was a challenging in itself.

CWB: How did you come up with the visual style of your film?
EG: It was difficult to go with the exact principal photography plan that we had. The shooting was delayed because of very unusual weather, the lead horse and our Ukrainian actor who originally was playing the Russian fugitive soldier died (by unrelated cause to our film on one of our shooting breaks). As for the visuals of the film, our storyboard artist is a very talented artist Purevkhuu Sukhbaatar that we shot according to his plan. Also our director of photography Baatar Batsukh did an amazing job with capturing the scenes.

CWB: How much of film found its final form in the editing process?
EG: Almost 10 % of the film was cut to fit the international market. Mainly the bloodiest scenes were cut. It was very difficult for me to cut them out. 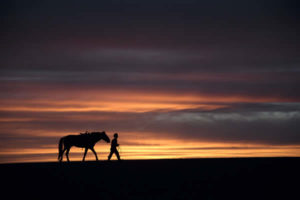 CWB: Do you have a scene that you are proudest of in the movie?
EG: The beginning part of our film the lead, Chuluun, is rock climbing to get the flower to cure his mother, and Rusty his horse helps with that and that is my favorite part. This scene portrays the connection between a human and a horse how it can be so strong that they absolutely trust each other. Also there is another scene in the film towards the end I cannot mention because I want you to see it with your own eyes. You will see why these are my favorite parts everyone who watches gets very emotional I still do.

CWB: Please tell us about the audience response to THE STEED.
EG: The audience response has been amazing. Our audience appreciates our motherland, friendship and loyalty through our brown horse Rusty. We had a very long resounding standing ovation in one of our festivals (Oldenberg) and it was an absolutely humbling experience. Our film is received very well and has the same emotional reaction from any audience from any background, religion and culture and that was our true win and is very important to us as this was our goal.

CWB: Any future project that you can tell us about?
EG: We are planning 2 films. One is an international action film and the other is a film on a Mongolian culture and a life style. If you would like to know more please follow our posts on Three flames pictures Facebook and Instagram page.