To learn more about the festival we had an interview with Xeyal Qertel, a Kurdish woman and a human rights activist that resides in New York.

Cinema Without Borders: Please tell us about New York Kurdish Film and Cultural Festival back ground and what motivated you to start this festival?

Xeyal Qertel: In 2017 some American friends and I were discussing the Kurdish struggle in general. We knew that once the Kurds defeated ISIS, they would be forgotten, as had happened many times before in Kurdish history. Kurds are praised as heroes while they are fighting and dying in a bloody war, but once the war is over, they return to oppression in the four parts of Kurdistan. Like many Kurds, I was disturbed by this Western hypocrisy: Westerners value Kurds when Kurds are sacrificing their lives in war, then forget them afterward. Just imagine, 11,000 Kurdish women and men lost their lives to defeat ISIS, and thousands more are now disabled! They left behind their loved ones–little children, elderly parents, husbands and wives. No one wants to talk about that. No one wants to acknowledge Kurds—it’s as if our lives are not valuable. So, I suggested that we need to introduce Kurds as living, breathing, suffering human beings, as artists, and as filmmakers. So, the New York Kurdish Film and Cultural Festival took off in order to introduce Kurds, Kurdish arts, films, and music. Filming Justice is our second co-host in addition to 8ball community

CWB: The world now knows about bravery and sacrifice of the Kurdish people for fighting with anti-democracy forces, is your festival addressing these issues?
XQ: Well, I think I partly answered your question, but I have to add this. The New York Kurdish Film and Cultural Festival is no ordinary festival. Each year we pick a theme about Kurds and organize the whole festival around that topic. This year’s theme is the Rojava Revolution. For years now, Kurds have been struggling for democratic confederation, environmental sustainability, and gender equality. In Rojava, Kurds opened up a new kind of social structure, a revolution with the people. The Rojava Revolution did not divide society: all ethnic and religious groups are acknowledged, included, and represented. Women share in all political positions. Rape is criminalized. Everyone in Rojava is allowed to participate in making decisions and to make their voice heard. It is a revolution! Our festival is instrumental in giving voice to the revolution. 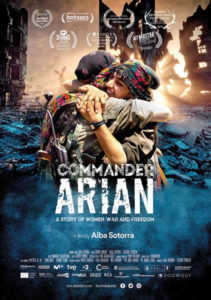 CWB: How much the audience of the New York Kurdish Film and Cultural Festival can learn about Kurdish rich culture and heritage?
XQ: Our purpose is to introduce Kurdish films, but it is not limited to films. We hold panels, we exhibit and sell traditional Kurdish clothing, we serve Kurdish smugglers’ tea, and we present live Kurdish music. This year’s festival features films from the Rojava Film Commune and panels to discuss “The Rojava Revolution” and “Why Solidarity with Kurds Is Vital.” In addition, this year, we will do fundraising for Kurdish Red Crescent, Heyva Sor a Kurdistane, which is the most important humanitarian and medical organization on the ground in North-East Syria today. One of our panelists, the American writer and artist Janet Biehl, has donated her paintings to benefit our fundraising.

CWB: Please tell us about presence of Kurdish cinema at the festival and the films that will be screened?
XQ: This year all the films in our festival come from West Kurdistan, known as Rojava. The opening night film is very special for us; it is called “Zarok in Em,” which means “Children.” It is about Kurdish efforts to teach kids theater, music, dance, and other art forms in the middle of a war zone. One of its directors was Mazdek Ararat, a filmmaker and a teacher who was also a fighter. He fought ISIS in Kobane and was martyred this past September. This year’s festival is dedicated to Ararat’s memory.

On the second day, we will screen two films: “Stories of Destroyed Cities” and “Berfin.” The director of the first one is Sero Hinde, one of the founders and directors of the Rojava Film Commune. Hinde takes us to visit destroyed Kurdish cities, and through his camera, we enter the cities and hear voices that once filled the now-rubble-filled streets; we see wrecked shops and listen to conversations from before the war. The second film, “Berfin,” was directed by Ozlem Arzeba. The protagonist, Berfin, is a young female guerrilla who has to grow up fast during the Kurdistan war. As she tries to adapt to her new life on mountain peaks, she dives deep into her inner world, seeking answers about her past.

On the last day, we will screen three short films from the Rojava Film Commune and hold a Q&A with directors via Skype. Finally, we will screen the film “Commander Arian,” directed by the Catalonian director Alba Sotorra. The film is about 30-year-old female commander Arian, who leads her battalion of women as they fight ISIS. For her, the armed struggle is the only path to emancipation from a deeply patriarchal society.

CWB: Are there any filmmakers or artists guests attending the festival?
XQ: Lukman Ahmad, a Kurdish artist from Rojava, will be with us. Lukman is also donating his paintings for our fundraising. And Janet Biehl, who visited Rojava three times, will be with us. We will have also Kurdish musician Dijwar Karaman, Kurdish singer Cihan Celik and performer Hussein Smko performing at the festival.

CWB: Please tell us about other events of the festival.
XQ: In the four Middle Eastern countries where Kurds live, Kurds and our language, songs, food, colors, and traditions have been criminalized, colonized, and assimilated. Our rich and ancient cultural heritage has been belittled and called uncivilized. During the festival, we express our pride in our identity: we sing in Kurdish, we serve Kurdish tea, and we exhibit our traditional clothes.

CWB: How fans of Kurdish culture and film fans can attend the festival?
XQ: The tickets are available for purchase now on Eventbrite and at the door.