You are at:Home»Conversations»THE MACALUSO SISTERS, an interview with Emma Dante

The story of THE MACALUSO SISTERS begins in 1985. The Macaluso sisters (Maria, Pinuccia, Lia, Katia and Antonella) are five young, orphaned siblings who live in and work from a shabby rooftop apartment in Palermo, Sicily. They make a living by renting doves out for ceremonies of all manner. Following each gig, the doves return home on their own, by air, naturally. One hot summer, a rare beach outing is planned on a day off from work. Near the close of a day full of enchantment, reverie, and close encounters with secret lovers, a shocking catastrophe transpires. That single event will change the course of the relationships between the sisters for the rest of their lives.

Bijan Tehrani: What motivated you to make THE MACALUSO SISTERS?
Emma Dante: I wanted to make a film about time passing that erases everything and changes bodies and creates mutations. But I also wanted to make a timeless film, a film that perceived life as an unconventional experience, not tied to fashions or events. The Macaluso Sisters could also be set twenty years ago because it doesn’t talk about something strictly contemporary but focuses on a universal and timeless theme: death. It is about a nest, a house where, in three acts of life, five sisters live.
I was interested in sisterhood, the strong and loving union between these women that lasts a lifetime, the incest between the living and the dead, the unbreakable bond accompanied by remorse and guilt.

BT: Has your background in theater helped you in developing the characters and creating the moods in your film?
ED: Unlike the play, where the sisters live in a completely empty stage, in the film there is the house and its eyes. From above there is the look of surveillance of the house, its eyes are in every room, and it is a static look, a fixed look. 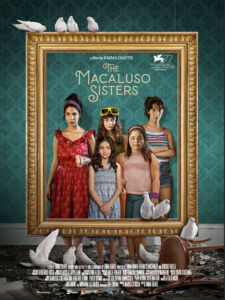 The house watches the sisters fight, laugh, play, and get sick and focuses on the buildup. The furniture is small niches full of compartments and drawers, sideboards and cabinets as family chapels. How many things lie forgotten forever inside the small home loculi!
In the play all this was not impossible. The film gave the Macaluso sisters a residence, an address. Now I know exactly where they live.
For the cinematographic transposition I was supported by different visions, those of Giorgio Vasta and Elena Stancanelli, who helped me to get away from the play’s theatrical structure by reviewing the story in light of a completely different form of expression, the cinema. Also, I was quite clear that the film would be something different, and from the beginning I didn’t fight to stay true to the play. I knew that – in order to make a convincing transposition – I had to betray and modify the play. In fact, the film is very different from the play; I would say that they are two totally autonomous works. It was quite a challenge, I never felt I was forcing the issue or a sense of loss, the experience was powerful and necessary.

BT: You have portrayed life after a tragedy so masterfully and believable that one thinks you may have had a possible personal experience in this manner
ED: I lost a brother in a car accident, he was only twenty-four years old. I didn’t have time to say goodbye to him, I saw him leave on a beautiful sunny day and he never came back. Next to me, in many corners of the house, I see his smile, his childlike look, and hear his laugh. He always wears a small red checkered shirt, a pair of sneakers, has glasses, and is always twenty-four years old. I would recognize him anywhere, anywhere in the world. He, on the other hand, wouldn’t recognize me, I’m sure, because in the 28 years since he died, I’ve changed, I’d say I’m a different person.

BT: Performances in THE MACALUSO SISTERS are brilliant, how did you go about casting and how did you work with your actors?
ED: With my casting director, Maurilio Mangano, we searched a lot of actresses. His incessant and meticulous research gave me many ideas even afterwards.
We found twelve actresses who, from children to elderly women, don’t wear any makeup but are very different in the three phases of their lives. What interested me the most was to find similarities in their gestures, in the way they move around the house, in their habits, but I didn’t want to look for doubles. I wanted different actresses who looked alike. Reasoning about bodies deformed by the passing of time was one of the most stimulating things we did. With the twelve actresses, we rehearsed in the house, which was still empty, for about three weeks before shooting, constructing a common alphabet of gestures, looks and verses that were meant to help the child, the adult and the elderly woman resemble each other in the various phases of their lives.
We are multiple bodies in the course of our lives and above all there is a moment (around the age of 50?) when we stop looking like ourselves. This is what the film is about, this freedom to narrate the metamorphosis of a body without tricks. I was interested in showing the radical change that time, a great surgeon, produces on our bodies.

BT: How did you come up with the visual style of your film? Camera movement, lighting and use of color to tell your story visually?
ED: First, the film is almost always shot with the camera held on the shoulder, by Clarissa Cappellani, the camera’s gaze intrudes between the story’s plots, the camera sits at the table, goes to the bathroom, lies down with the sisters, is an actress like them, masterfully interprets what she sees with a gaze that is sometimes indiscreet and perhaps intrusive. Then there is the surveillance of the house, the eyes of the rooms, placed high up, which had to be fixed, like the alarm cameras attached to the ceiling in a corner where they frame the whole room. This fixed gaze is always from above as if they were also the eyes of the doves, the real parents of the Macaluso sisters.
With Gherardo Gossi (DOP) we reasoned about the quality of light inside and outside the house as the seasons change and we started from a very hot sultry light of summer to a livid light of the last act, winter, in which the halos on the walls become funeral chapels.

BT: Please tell us how pandemic has affected your work as a filmmaker?
ED: I felt a sense of worldwide mourning, a silence in the streets, that I will carry with me forever. I saw the empty cities, streets I didn’t recognize without the cars and people, buildings I had never seen before because they were covered by the chaotic frenzy of urban life. I had time to observe, to contemplate, to grieve for the painful moment that afflicted us, and my reflection made me realize that of many useless things I will be able to do without in the future. But one priority that I will never be able to abandon, like breathing, is theater, cinema, and art, which nourishes me as bread does and quenches my thirst as water does.

BT: Please tell us about your future projects
ED: I’m writing my third film, based on a play of mine called Misericordia. It’s the story of three whores who adopt a disabled boy who is the son of one of their companions, killed with kicks and punches by one of her clients. Before dying, the woman gives birth to Arturo who is the protagonist of the story.

Born in Palermo in 1967, Emma Dante explores the subject of family and marginalization through a poetics of tension and madness with a hint of humor. She became a playwright and director after graduating from the National Academy of
Dramatic Art “Silvio D’Amico.” 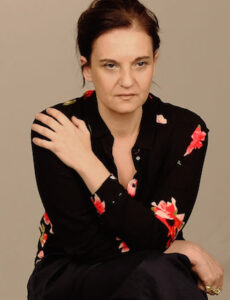 Emma Dante
In 1999, in Palermo, she created her theater company Sud Costa Occidentale, with which she won the 2001 Scenario Prize for her project “mPalermu” and the 2002 Ubu Prize as an emerging Italian artist. On December 7,1999, she opened the theatrical season at La Scala in Milan by directing Bizet’s “Carmen,” conducted by Daniel Barenboim.

In 2013, Dante’s first feature, “Via Castellana Bandiera” was in competition at the 70th Venice Film Festival. Her main actress won the Best Actress award at the festival. In 2014, the play “Le sorelle Macaluso” premiered at the Mercadante Theatre in Naples, co-produced by Theatre National of Bruxelles, and the Festival of Avignon for the project “Cities on Stages.” “Le sorelle Macaluso” won several awards, including “Le Maschere” Award as Best Play of the year, the Critics Award, and the Ubu Award for Best Direction and Best Play.

In 2014, Emma Dante became the main director at the Biondo Theatre and the director of the School of Arts and Entertainment established in the theatre of Palermo.