You are at:Home»Conversations»THE GOALKEEPER, Bolivian Oscar Entry, an interview with director, Gory Patino

THE GOALKEEPER, Bolivian Oscar Entry is a thought-provoking thriller about a former iconic goalkeeper, Jorge “Muralla” Rivera, whose fame has run out and he is now scraping out a living as an alcoholic bus driver.His son is desperately sick and he does the unthinkable to save his child but to no avail.Racked with guilt and haunted by ghosts, Jorge seeks redemption to rescue the young girl he sold, even if it means his own downfall.THE GOALKEEPER is a powerful story that addresses the sad and frightening facts that approximately eight children a day disappear from the streets of La Paz in Bolivia as human trafficking becomes a serious international business.Writer/director Gory Patino is a graduate of Chapman University Film and Television School and former teacher at the NY Film Academy in Burbank.The Goalkeeper is a spin-off of a new 10-episodic TV series “La Entrega” about a missing girl sold to the human trafficking network. Patino also co-wrote and co-directed PSEUDO, which recently finished principal photography and has been selected as a finalist in the Havana Film Festival for the Coral Post Production Award to be announced in December.His latest script ROCK, PAPER, SCISSORS received the Top 10 Award at the 2010 Slamdance Screenwriting Competition.THE GOALKEEPER is a Macondo Art production, produced by Leonel Fransezze, Claudia Gaensel and Samuel Doria Medina.The film is written by Fernando Arze, Gory Patino, Fernanda Rossi and Camila Urioste and directed by Gory Patino.

The following is CWB’s interview with Gory Patino about The Goalkeeper:
Bijan Tehrani: How did you come up with the idea of the Goalkeeper?
Gory Patino: The goalkeeper is inspired by real facts. One of the writers had developed a play about human trafficking and had access to documents about true cases. We interviewed an activist whose daughter is still missing and she told us how severe this cancer is, not only happening in Bolivia but also in the whole world.

And the best way to communicate an idea is telling a story that provokes a dialogue after watching a movie. We started with an universal question: How far would you go to save your son’s life? Can you replace a life with another one?

The second step was choosing the genre. I am a thriller lover. This genre gives me the chance to depict an X ray of a city, around a crime and create characters from different parts of a society to make a social comment that urgently needs to be heard. 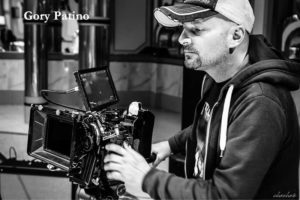 BT: Jorge character is a sophisticated and very interesting character, how did you mange to develop this character?
GP: Once a friend told me he took a taxi back home and recognized the driver: He was a soccer idol from the 90s. That stayed in my mind, and I wanted to tell a story about an ex soccer star. And a goalkeeper has a unique personality in soccer teams, he is the doorman, the last man standing… so together with the writing team, we decided to tell a redemption story that has no redemption, like Jesus carries the cross, Jorge carries his arch.

BT: Is Jorge character based on a real person?
GP: No. As I mentioned Bolivia in the 90s experienced soccer glory days, because we made it to the world cup and we still have a lot of nostalgia of those moments. People ask me all the time if Muralla existed, and that is interesting… There was a famous goalkeeper in San José who caught a penalty and won them the championship but he wasn’t Muralla.

BT: Please tell us about the visual style of your film, you have managed to create a dark world that Jorge lives in it, how did you come up with this style?
GP: I wanted to give a sense of reality to everything. I decided to shoot handlheld because it permits the camera man to follow actors, for me the actors job is extremely important so I place the camera for them. I also choose some pivotal points in the story to brake the horizon, meaning when Muralla suffered a change, we altered somehow the perspective or angle. Plus, we used slow motion for the intimate moments with alcohol and solitude.

La Paz is another character in my film. Its topography with slanted streets looking towards a big crater is the very essence of the city. It allowed me to play with these vistas with views of the city facing a big hole, an analogy of what is going on with Jorge, a desperate man confronting his own downfall. We shot during wintertime when the sun is harsh so we could achieve high contrast in exterior scenes and replicate them in the interior scenes.

BT: Performances in your film are excellent, please tell us about casting of the Goalkeeper and how did you worked with actors
GP: Fernando Arze Echalar plays Muralla. He is a very talented and experienced actor that also cowrote Muralla and helped me cast the movie. While writing he already was thinking about the character and doing research in marginals, drivers and alcoholics, Fernando changed his body movement and did a total immersion into the role. He became Muralla and at the end of the shoot he felt sick, the role took over. The other actors are professionals as well, Cristian Mercado that plays Cacho did a tribute to his father that passed away a few years ago transforming his look; and Pablo Echarri who plays Nico, the human trafficking network doctor went far away from the roles he is used to play in Argentina and propose a charismatic character surrounded by darkness.

I love working with actors because I come from theater. I started as an actor and still belong to the guild of actors back home and often go back in front of the camera or on stage.

BT: How Goalkeeper has been received in Bolivia and other parts of the world?
GP: The movie was a box office hit in Bolivia. It played in theaters for over 3 months and got very good reviews. Our ticket sales were low the first week but the word of mouth helped us achieve numbers that a Bolivian film didn’t get for the past 15 years. I have been screening the film in LA and the reactions are very positive as well. We hope to confirm dates for our premiers in Argentina and Uruguay soon.

BT: How do you see the chances of the Goalkeeper to get a nomination or win the Oscar?
GP: I am aware that the competition is very high but proud to be considered as a filmmaker that can show the world that Bolivian Cinema is going through a good growth movement and that my country has many stories that needs to be told. I am fortunate to have encountered with a private investor that believed in my project and thought that the film’s social comment is important to reach broad audiences.