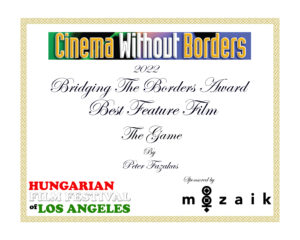 CWB jury statement: At Cinema Without Borders, we have had the honor of offering our Bridging the Borders Award to the Best Feature Film at the Hungarian Film Festival of Los Angeles since 2014. MOZAIK Bridging The Borders Award is offered by Cinema Without Borders and sponsored by MOZAIK Philanthropy.
For this year we had five amazing films to choose the winner from. The winner of 2022 Best Feature Film Award is a beautifully made, sophisticated film that shows how under the dictatorship of any kind, corruption leads individuals to destroy others for personal gains. Also this film brilliantly challenges the viewer in discovery of the truth. This film is The Game directed by Péter Fazakas 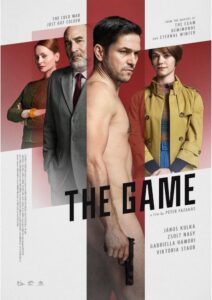 Director: Péter Fazakas – Screenplay: Norbert Köbli – Director of photography: András Nagy – Editor: Zoltán Kovács – Music: Asher Goldschmidt
Cast: Zsolt Nagy, Gabriella Hámori, János Kulka, Péter Scherer, Viktória Staub
1963, Budapest. A veteran counter-intelligence officer’s loyalty is tested by his protégé in a dangerous spy game. Counter-intelligence officer András Jung (Zsolt Nagy) lives a perfect life: he is happily married to Éva (Gabriella Hámori), and the only obstacle between him and his desired promotion is a competitive colleague, Kulcsár (Péter Scherer). When the legendary spy, Pál Markó returns in connection with an unresolved case, twist comes after twist, and so begins a ruthless battle where no one and nothing is what they seem to be, and a single human gesture can cost your life.