You are at:Home»News»THE DRESS winner of Bridging the Borders Award nominates for an Oscar

The Dress, directed by Tadeusz Łysiak and the winner of 2020 Bridging The Borders Award at the 21th edition of Polish Film Festival, LA has been nominated by Academy Awards for the Best Live Action Short Film Oscar.

The Dress is a film that bravely shines a light on the cruelty of our world towards those whose physical appearance is different. This well-crafted film tells the story of Julia, a maid at a roadside motel who has lived a lonely life, accustomed to scorn for being ‘a little person’. When she is asked on a date, the filmmakers masterfully demonstrate a sense of hopelessness through her search for the perfect dress to wear, with many not fitting her small frame. The performances, particularly that of Anna Dzieduszycka in the lead role, are exceptional.

After the award announcement at the Polish Film Festival LA, we had a Skype video interview with Tadeusz Łysiak, director of The Dress, winner of the Bridging The Borders Award that still helps to find out why this beautiful film has been nominated for an Oscar:

Working at a roadside motel Julia doesn’t want to suppress her desire, sexuality, and longing for physical intimacy any longer. When a handsome truck driver comes into her life, her unrealized fantasies begin to come true. But “The Dress” is not just the story of a woman meeting a man. Julia, physically different from the society around her, experiences rejection and bullying. “The Dress” is a universal story about longing that affects everyone, regardless of the barriers and differences that divide us. 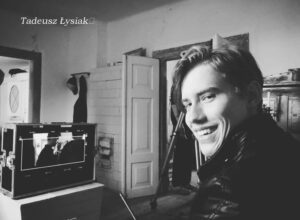 The movie was written and directed by Tadeusz Łysiak, a student at the Warsaw Film School. The production has screened at nearly 40 film festivals around the world and has won 18 awards. Awarded at the prestigious Atlanta Film Festival allowed “The Dress” to compete for an Academy Award® nomination.

The main actress Anna Dzieduszycka hopes that her role will be one step towards changing the perception of individuals like her on screen: ‘I wish people stop using the word “otherness”, become more open-minded and embraced diversity of viewpoints. […] That looks don’t matter. We all have magic inside us.’ says Anna Dzieduszycka. Her acting has been recognized at many festivals in Poland and abroad. Anna’s awards include the Grand Prize for Best Actress at Flicker’s Rhode Island International Film Festival in the US. Jury statement: The story told in “The Dress” also forces us to reflect on the condition of society, which has become almost a slave to artificially created beauty standards.

The Oscar-nominated title was created by a team composed mainly of students and graduates of the Warsaw Film School. The director, Tadeusz Łysiak, participated in the prestigious program FUTURE FRAMES – Generation NEXT of European Cinema within Eastern Promises at the Karlovy Vary International Film Festival. He is also a winner of the “Discovery Eye” award for young talented filmmaker at the Polish Film Festival in Chicago. Tadeusz Łysiak’s previous award-winning film “Techno” has had over a million views on YouTube.

The cinematographer, Konrad Bloch, is a graduate of Warsaw Film School. He was recognized for his work as a cameraman on the set of “The Dress,” among others, at the 45th Gdynia Film Festival – the award for Best Cinematography – the Bronze Tadpole at the Energa CAMERIMAGE Festival and the Best Cinematography award at the 38th Sulmona Film Festival.
The film is produced by the co-founder and Chancellor of the Warsaw Film School, director and screenwriter Maciej Ślesicki. He is the producer of many student films, including “Our Curse,” which was nominated for an Academy Award® for Best Documentary (Short Subject) in 2015. “The Dress” was also co-produced by DOBRO, MIŁO and GŁOŚNO. The project was co-financed by the Polish Film Institute. Salaud Morisset is responsible for international distribution and sales. “The Dress” is the only production this year from Poland that is up in the running for an Academy Award®. Soon the young polish filmmakers will walk the red carpet together with the biggest stars of world cinema. The results of the Oscar race will be announced soon.
The 94th Academy Awards® ceremony will take place on March 27th at the Dolby Theatre.