At Cinema Without Borders we had the opportunity of interviewing Michael Steiner about making of The Awakening of Motti Wolkenbruch. Please listen to the podcast of this interview:

The Awakening of Motti Wolkenbruch,  is the story of  Motti Wolkenbruch , a  young man that through all his life has behaved, and lived up to his family‘s expectations, especially those of his orthodoxy religious MAME. As a devout Jew she envisions a precise route for Motti‘s life: She wishes to see him marry well, and proceeds to invite suitable young female candidates to a succession of match-making events. 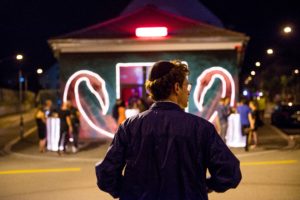 To Motti‘s chagrin most of these girls bear an uncanny resemblance to the Mame herself. The young man resists, suspecting that life has other, more exciting avenues on offer for him to explore. Soon his heart is ignited, as he furtively falls for beautiful LAURA  during a chance encounter at his university.Laura is very different from the women presented to him by his Mame. She wears body- hugging jeans and introduces him to gin-and-tonic cocktails. There is a flaw, however: Laura is a Shiksa, and thus taboo for a devout Jew. Still, Motti wishes to appeal, and he proceeds to trim his beard and get new, more stylish glasses. Thus, in his Mame‘s eyes, abetting the eradication of the very essence of Jewdom.

Not seriously in love, but with new-found confidence, Motti returns to Zurich, more determined to follow his inclinations and continue to meet Laura, whereupon the Mame evicts him from the family home.

Alone in his hotel room Motti must take a decision: Should he pursue a traditional way of life ensconced in the comfort of his family‘s protection, or venture out on a wondrous journey into self-determination in the arms of a Shiksa…