You are at:Home»CinéEqual»A conversation about The Apology, Airing October 22 on POV

The Apology depicts the personal journey of three women whose lives were upended when they were forced into sexual slavery during World War II.

United Nations researchers report that between 1931 and 1945, the Japanese military forced an estimated 200,000 to 400,000 women and girls into institutionalized sexual slavery. Euphemistically referred to as “comfort women,” they typically ranged in age from 11 to 33 and were taken from Japanese colonies from Korea to Indonesia. Mobilized through forced recruitment, kidnapping, false employment offers or sale by family members and employers, they served in brothels supervised by the Japanese military. Seventy years after their imprisonment, the surviving “comfort women” still await an official apology from the government of Japan.

We had the opportunity of interviewing Apology’s director  Tiffany Hsiung’ about making of this film on camera:

Writer/director Tiffany Hsiung’s film The Apology follows the personal journeys of three surviving “comfort women”—or “grandmothers”—Grandma Gil in South Korea, Grandma Cao in China and Grandma Adela in the Philippines. Facing fading health in their twilight years, they grapple with the impact of their wartime experiences and the legacy they will leave behind. Summarizing the stakes, Grandma Gil says, “Once we resolve the comfort women situation, the war can finally come to an end.”

The Apology has its national broadcast premiere on the PBS documentary series POV (Point of View) on Monday, October 22, 2018. POV is American television’s longest-running independent documentary series, now in its 31st season. The film is a co-presentation with the Center for Asian American Media (CAAM).

“Grandma” Gil was a 13-year-old living with her family in Pyongyang, Korea, when a man promised her a factory job to lure her into sexual servitude. “Grandma” Adela and two friends were abducted one night by soldiers from a street corner, and “Grandma” Cao was one of four girls snatched when the Imperial Japanese Army invaded her mountain village. Cao reflects on life with her parents and six sisters: “Life was peaceful back then, until the Japanese took me away, kidnapped me.”

As the film unfolds, the history and struggles that have shaped the women gradually come into view. Intimate scenes of daily routines and affectionate exchanges with friends and loved ones provide a glimpse into how they have managed to carry on despite their traumatic experiences. These moments also reveal the many complex choices the grandmothers have had to navigate in order to survive.

Grandma Gil is part of a well-established network of activists and has been attending weekly demonstrations in front of the Japanese embassy in Seoul for years. Despite her age and declining health, she remains a key spokesperson in the movement seeking an official apology from the Japanese government. She asks, “Will the wound go away if you apologize? No, the scars will remain, but my heart can heal. I am awaiting that day.” Her exhausting travels eventually take her to the hallowed halls of the United Nations Human Rights Council in Geneva to deliver a petition with over a million signatures on behalf of her fellow survivors.

Grandma Cao lives in her hometown, a remote mountain village in rural China, where the fate of hundreds of kidnapped local girls has long been an open secret among the old-timers. Fiercely independent, Grandma Cao insists on living alone despite the protests of her loyal daughter, who has been unaware of her mother’s story. It is only when a historian asks Grandma Cao to testify about her experiences that the woman agrees to break decades of stoic silence about her painful past. Hearing the details of her mother’s wartime ordeal for the first time, Cao’s daughter struggles with how to share this painful legacy with her own daughter, but vows to tell her once she’s older.

In Roxas, Philippines, Grandma Adela manages to find solace, camaraderie and a sense of freedom as part of a support group for survivors. Though she fell in love after the war, she carefully hid the truth about her past from her husband. On her secret struggle she says, “If you expose yourself then what for? To be a hero? When in fact you are a society outcast.” Now widowed, she is wracked with feelings of guilt over not sharing her secret. She resolves to tell her children, but remains unsure whether unburdening herself after all these years will make up for withholding the truth from the love of her life.
“Throughout the years we’ve had the privilege to get to know the grandmothers,” said Hsiung. “Through their relationships with family and community they have taught us the power of the human spirit. I couldn’t be more proud to share their stories and hope that viewers, too, can be just as inspired as I’ve been by their resilience and strength as they help de-stigmatize and reframe what it means to be a victim of sexual violence.”

“The Apology highlights a decades-long effort to bring this dark chapter in history to light,” said Justine Nagan, executive producer/executive director of POV/American Documentary. “At the helm of this movement are the women themselves, despite enduring stigmas and shame. Whether they are seeking a formal apology from the Japanese government or summoning the courage to finally share their secret with loved ones, these grandmothers seize their last years to set future generations on a course for reconciliation, healing and justice. This is an important historical addition to the #MeToo movement.” 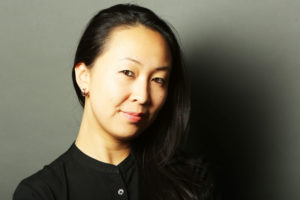 Tiffany Hsiung, Director
Tiffany Hsiung is an international award-winning filmmaker based in Toronto. Hsiung’s work—both filmmaking and teaching—has taken her through and beyond the diverse communities of her hometown and across the globe. Her approach to storytelling is driven by the relationships she builds with the people she meets. By shooting much of her own work, Hsiung obtains access while remaining unobtrusive. Since 2009 Hsiung has been documenting the lives of three survivors of military sexual slavery in Korea, Philippines and China during World War II by the Imperial Japanese Army for her debut feature length documentary, The Apology, a National Film Board of Canada production. The Apology had its world premiere at the Hot Docs Canadian International Documentary Festival, where it was one of the festival’s top 10 films. It has won more than a dozen awards, including the Busan Cinephile Award for Best Documentary (at the Busan International Film Festival, Asia’s largest festival) and an audience award at the Cork Film Festival. It received a special jury mention for the ICFT-UNESCO Gandhi Medal at the 47th International Film Festival of India. Hsiung was nominated for an Allan King Award for Excellence in Documentary from the Directors Guild of Canada, and recently The Space We Hold, a digital interactive documentary she co-created based on The Apology, was the recipient of a Peabody-Facebook Futures of Media Award, as well as a Canadian Screen Award for Best Original Interactive Production. Hsiung’s second feature film is currently in development.