You are at:Home»Other Arts»TARA VIOLET NIAMI: SELF REFLECTIONS, a solo exhibition

Tara Violet Niami is an award winning, internationally exhibited Australian-Iranian American cinematographer and photographer. Tara’s solo exhibition,TARA VIOLET NIAMI: SELF REFLECTIONS- 2008-2018 of 10 years of her self portraiture at The Lodge. Her self portraits are visually cinematic explorations of vulnerability, inner darkness, and how it feels to be caught in a dream. You can view her work at www.taravioletniami.com 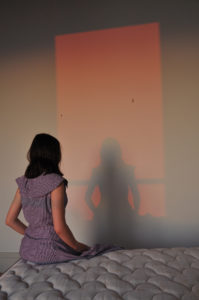 In high school Tara won the national gold medal in the Scholastic awards as well as silver medals for her photography, and then won first place in the Spotlight Awards for photography in Southern California. Tara received a BFA in Photography from Pratt Institute (where she attended with a Presidential scholarship) and an MFA in Cinematography from the acclaimed American Film Institute Conservatory (where she attended with the Tom Yoda scholarship). She was also the recipient of a scholarship from the Iran Scholarship Fund for her contributions to Iranian American culture with her film “The Sin” based on Forugh Farrozhad’s poetry. Tara was recently the still photographer on Focus Features film MUSTANG directed by Laure de Clermont-Tonnerre starring Matthias Schoenaerts (Far From the Madding Crowd), Jason Mitchell (Straight Outta Compton) and Bruce Dern (Nebraska). She was also the still photographer on the film MAGIC LANTERN directed by Amir Naderi (The Runner) starring Monk Serrell Freed, Sophie Curtis and Jacqueline Bisset.