You are at:Home»News»“Subdued” wins at the Celebration of Iranian Critics and Screenwriters

TEHRAN – “Subdued”, director Hamid Nematollah’s drama about an emotional journey, has won several awards including one in the best film category at the 11th Celebration of Iranian Cinema Critics and Screenwriters.

Nematollah was also picked as best director, while Leila Hatami won the award for best actress for her role in the movie by the France-based company Dreamlabs.

The film is about Mina who is recently divorced from her drug addict husband. With her mother deceased and estranged from her father, she leads an independent life. After finding a job in a restaurant, she strikes up a friendship with its attentive manager. She starts having feelings she has never before experienced. These feelings, eventually shared, are shaken when the manager begins to distance himself from her. Thus commences a tumultuous emotional journey. 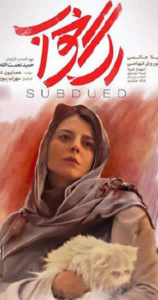 “I really care about critic’s views, because their views help make a film memorable,” Nematollah said after accepting his award at the Conference Hall of the Institute for Intellectual Development of Children and Young Adults on Thursday evening.

The award for best actor went to Hamed Behdad for his role in “Blockage” directed by Mohsen Qarai.

He dedicated his award to Mohsen Hojaji, an Iranian soldier who was killed by ISIS terrorists in Syria a few weeks ago.

The best supporting actress award was presented to Tannaz Tabatabai for her role director Monir Qeidi’s debut feature film “The Villa Tenants”, and the award for best supporting actor award went to Hadi Hejazifar for his role in director Mohammad-Hossein Mahdavian’s political drama “The Midday Event”.

The Society for Cinema Critics and Screenwriters, which is the organizer of the gala, honors two first-film directors every year with the Best Creative and Promising Filmmaker Awards.

This year, Qeidi for “The Villa Tenants” and Asghar Yusefinejad for “The Home” received the awards.

The award for best cinematographer went to Masud Salami for “Stuffiness” directed by Fereidun Jeirani.

Bahram Dehqani was named best editor for his collaboration in both “Stuffiness” and director Rambod Javan’s drama “Negar”.

The organizers also honored Jamshid Hashempur, the Iranian actor who is mostly famous for his roles in action movies, with a lifetime achievement award.