You are at:Home»Film Reviews»Sly, a political comedy from Iranian cinema

Kamal Tabrizi’s Sly (Marmouz) is an entertaining and clever political satire, an uncommon genre from Iranian cinema. The only other film that stands out as a political comedy in history of the Iranian cinema after the revolution, is a box office hit called Lizard (Marmoolak), also directed by Kamal Tabrizi. I could never bring myself to like the Lizard, it lacked creativity in visual storytelling, but Sly is quite different and much more advanced in use of language of cinema. Sly is about a young man, Ghodrat, that runs a group of Lumpen hardliners that trash public gatherings such as musical concert. They call themselves reds (they punish anyone that passes their numerous red lines) and call the moderates, Blues.

Ghodrat (may be a reminder of ex Iranian hardliner president, Ahamadinejad) always dreams of becoming a parliament member and with the help of friend rehearses his speeches and luck knocks upon his door when during leading his men to trash a concert, to scare away the crowd, he yells “Bomb” and then a few minutes later a bomb explodes in the concert hall and Ghodrat become a hero for saving the people’s lives! Now a group of Blues want him to be their candidate and from here a roller coaster ride to reach to power starts for him.

Sly is a situation comedy, where Ghodrat because of his naive nature, in very funny scenes, reveals the lies and real intention of different political groups. Ghodrat himself is an opportunist, a wolf wanna be surrounded by real wolves.  Sly steps in realms such as talking about royalists and making fun of major sections of the Iranian political structure that has always been a taboo. 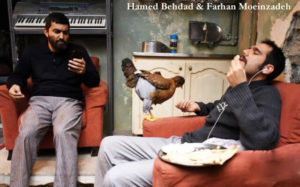 Hamed Behdad as Ghodrat, offers the best performance of his career so far and it’s fun to watch Mani Haghighi as a political gambler in the film. Another admiring performance in Sly is from is from Farhan Moeinzadeh, a promising comedian, as friend of Ghodrat, that has a chicken as a companion.

Bamrani Band music helps the film and hope brings more audiences to the new and creative songs of this band.

I wish Kamal Tabrizi, could have developed and worked more on Ghodrat’s character, then he may had ended up with an unforgettable film. The last word: if you get a chance watch this film, it’s a light entertaining comedy that for the first time takes you to unknown realm of Iranian politics.