SIGGRAPH was held in Los Angeles July 30th thru August 3rd.  This year the atmosphere was filled with change as this was truly the year of the game engine as there were VR projects created in the Unreal Engine and Unity. 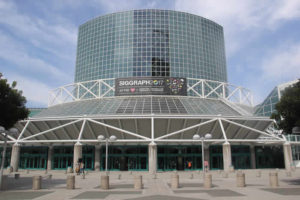 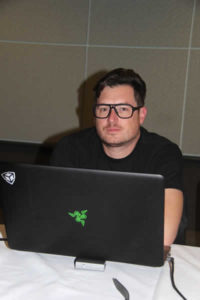 Adam Myhill, Head of Cinematics at Unity Technologies demonstrating the editing capabilities of Unity in Real Time to individual elements for the short film “Adam”. (photo by Akiko Ashley 2017.)

“Adam” is a Webby Award winning computer-animated film created in the Unity game engine that offers real time rendering and editing. It was created to demonstrate the power of the real time editing tools in Unity so artists and filmmakers can make changes on the fly to individual elements in their story using Cinemachine (a unified procedural camera system) and Timeline.  You can select the sky and make changes to the sky in real time and only the sky is affected while the rest of your assets remain the same. Let’s say the sky gets darker, your assets lighting will change with the change you make to the lighting by changing the sky without drastic changes to the world. This is truly virtual storytelling on a whole other level.

This year at the Electronic Theater, the BEST IN SHOW went to “Song of a Toad” a student film from Germany. It is the story of a overweight ugly frog who sits on the head of the lead character Svobodan’s head, Svobodan tries every method he can come up with to get rid of this frog. It is a story reflecting how we see imperfections in ourselves and do whatever we can to correct it. Svobodan’s nuisance reveals a lot about himself.

JURY CHOICE went to “John Lewis, Buster the Boxer” by MPC, a very cute advert about animals who love trampolines demonstrating there is a gift everyone, and the BEST STUDENT PROJECT award went to “Garden Party” (France).  “Garden Party” is a beautiful film, with beautiful lighting with a bunch of creatures that find themselves headed to a destination. 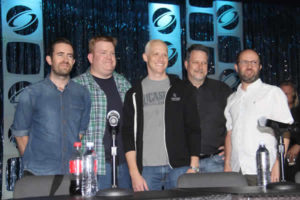 I also enjoyed all the submissions including “Canal Kitchen” (France) animation combined with live action to bring a kitchen to life cooking ingredients unlike anything you have seen before…”Analogue Loaders” is short story about an artist who curses at his computer every time it crashes and decides to take those digital icons into something analog and playful. “Pirate Smooch” (Germany) is a funny take on pirates that you must see, not something done well with words. “Poilus” (France) was one of my favorites, made me shed a tear, it is very dark story about this army of rabbits about to fight a war, and one bunny, a musician finds his way of coping through this reality with his harmonica. “Scrambled” (Netherlands) is a comedy about a farmer trying to get an egg from his hen. “Resistance” (France) was a creepy take on dinner. “Happy Valentines Day” a short film by the Neymarc Brothers was their first film in the festival. “Elemental” (Germany) is a real cool art film showing off how particle systems can create beautiful imagery. “Asteria” (France) is the story of two astronauts landing on a planet to discover something they didn’t expect. Everything was amazing to watch and it was a great selection of very different tastes in film. 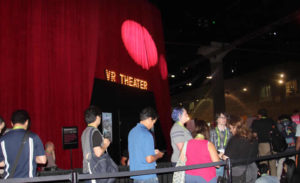 Curated content from ILM VFX for “Kong Island” and “Rogue One, A Star Wars Story”, WETA Digital “Guardians of the Galaxy 2” and “Valerian, A City of A Thousand Planets” plus from Epic Games’ Fortnite” A Hard Days Night” and of course Pixar’s “Lou” is about a bully who steals toys only to get his due from the friendly creature in the “Lost and Found” box.

In a short film by the Mill, Chevrolet, the Camaro takes on the Futuristic Chevrolet FNR using the Unreal Engine. Sirocco (France), “Seasonal Changes in Carbon Dioxide” by NASA reveals how Carbon Dioxide effect our planet and what those numbers in the statistics means for us, and one of my favorite pieces as the “Final Fantasy -XV Omen Trailer” by Square Enix filled with fast pace action and visuals with insane landscapes. Jaw dropping.

If you love the Electronic Theater, you had to see the VR Theater showing films with a 360 perspective. This is where you wear the Goggles to explore filmmaking on a different level. “Arden’s Wake” is a film that takes place in the ocean water, a young woman named Mina and her father live on an isolated ocean bound life in the distance future. At the beginning of the film we get a hint of Mina’s mother drowning in the water.  Then she goes on a scavenging hunt as if ignoring the memory.  She realizes her father is missing and goes out to find him. She discovers a cabin built on top of a future Manhattan that is underwater. A creature lives in these ruins and she must find her father no matter what.  “Chocolate” is music video in VR with brightly set lights in the background that move with the music. “ Dear Angelica” (Oculus Rift) is a beautiful storytelling experience that is like watching a story being painted on the screen in real time. It is the story of a girl remembering her loved one in a series of memories that unfold in front of you. “Fantasynth” is an audio reactive virtual reality experience with a room full of lights that respond to music. “Rainbow Crow” was also featured at the VR/AR Summit. “Rainbow Crow” is the animated tale of carefree animals that think spring will last forever.  When they realize winter is coming, they look for a hero to save them from the danger. Their hero is Rainbow Crow; he is the one they need for this challenge. “Son of Jaguar” a Google Spotlight Story by Jorge Gutierrez is the story of a wrestler who has passed on who comes to visit his family on the “Day of the Dead” only to find his son is a failure, so he decided to follow him around to find a way to help him…it was one of my favorite films in the VR category. “Sonaria” the second Google Spotlight story I saw was a 2D art experience in a virtual world. It feels like the whole world is alive around you.  The art is fluid and the cameras work to give you whatever point of view you to explore this 2D art immersion. The Antarctica Series “Under a Cracked Sky” takes you on a dive on the depth of Antarctica waters with experienced divers exploring the water below the freezing ice. “We Wait” A BBC animated VR experience that is based on BBC News Interviews with migrants; it is a film that transports you to heart of the refugee crisis. Aardman Animations did all the powerful imagery to bring the story to you through virtual reality. “Zero Days” is a disturbing VR experience that tells the story of a computer virus as it invades your computer. This is the story of Stuxnet, the first cyber weapon to cause real physical damage. The film illustrates how close to home the threat is representing a new chapter in modern warfare.

The film medium is changing as computer animation and VR bring us new tools to explore stories that we never thought possible. VR gives us an option to be part of the story and in some films you can interact with the elements and change the narrative. The immersive power of both gives these stories a certain perspective that is hard to deliver in live action. Price Waterhouse stated that 5 billion dollars in investment would be spent in the VR space. It is a good time for a storyteller or filmmaker to explore an interactive experience that could bring a depth to their imagined worlds. As game engines become part of the experience, we have to embrace change or miss out on a whole new filmmaking experience. I hope you get to see some of these great short films and VR experiences. You will not be disappointed.