You are at:Home»Feature Story»Sheeple – Birth of a new voice for world cinema

I have been following Houman Seyyedi’s work as a filmmaker and witnessed his artistic growth through his last four feature films—Africa (2010), Thirteen (2012), Confessions of My Dangerous Mind (2014), and Sound and Fury (2016). Houman Seyyedi is not only a film director, but an author as well. He has his own way of telling stories creating worlds and he writes, directs and edits his film, as well as having a hand in the sound and music. Now in Sheeple (Maghz-haye Kuchak Zang Zadeh), Houman takes a big step forward and comes up with an extraordinary and shocking film which provides great proof of the birth of a new voice for world cinema.

Sheeple is the story of two brothers, Shakoor (Farhad Aslani) and Shahin (Navid Mohamadzadeh), who are making crystal meth in a hidden laboratory in a middle-of-nowhere urban jungle. When footage of their sister Mona ( Marjan Etefaghian) starts spreading on social media, strange incidents start to occur. 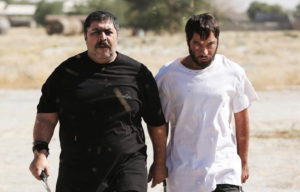 Several western film critics have tried to convey that Houman Seyyedi has been trying to follow in Quentin Tarantino’s style. The fact is that Houman Seyyedi may have been inspired by Tarantino, but he is not copying anyone. In Sheeple, the director even avoids giving cliché references to shots or scenes from other films. It evident to me that Houman has studied cinema because he uses the pure language of film in an elegant manner.

Going through his previous films, you can notice that he has been experimenting with new ways of telling stories, developing characters, and building atmosphere. It becomes evident in Sound and Fury that he is settling into his own style. Houman Seyyedi has masterfully built the world in Sheeple, a slum that lives through violence and a strange sort of kindness; a place that never experiences peace. In Sheeple, poverty comes with pride and is not the selling point of the film. There is an unnerving rhythm running all through the film that makes you experience and share the characters feelings. 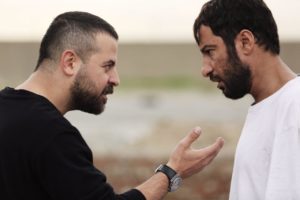 The performances in the film are simply magnificent. Houman Seyyedi’s casting choices show another strength of his artistic direction. Farhad Aslani finds an opportunity to prove his talent as a great actor by playing Shakoor. Shakoor runs the whole world of Shepple. He is the protector of the poor orphan kids that later become his drug dealers. Shakoor is a Godfather type of character that could easily lead the other performers to overact and exaggerate, but Farhad Aslani keeps the balance in his controlled acting.

One of the major highlights of the film is Navid Mohamadzadeh performance as Shahin, the younger brother. Shahin does not belong to the world that he lives in—he is kind at heart, a bit mentally disturbed, and jealous of his older brother. Shahin believes we are all like sheep, and we need a shepherd. He actually wants to be a shepherd like his brother Shakoor. Watching Shahin’s character on screen, you truly forget this is fiction. It’s more like a real person in a documentary. Navid Mohamadzadeh succeeds in using his body language to transform into Shahin and what adds to this exceptional performance is the way he adapts a nervous speech style for that character. Playing a character like Shahin who continually changes his mood is very difficult, and I have seen only a few actors—such as Dustin Hoffman in Rain Man—deliver such performances with conviction. Navid Mohammadzadeh is without-a-doubt a very talented actor and hopefully we will hear more about him in the future. I must also mention the warm performance of Navis Pourfaraj as Amir, Shahin’s friend. Navis helps round out a fantastic cast.

We are eagerly anticipating Houman Seyyedi’s next film.

Sheeple is part of the UCLA Celebration of Iranian Cinema