You are at:Home»Festivals»Scandinavian Film Festival LA 2021 according to James Koenig

The 22nd  Scandinavian Film Festival L.A. (SFFLA) due to pandemics will be held online. On January 7-10 and January 14-17 and January 21-24 SFFLA and Scandinavia House New York will bring you “TOP FILMS FROM THE TOP OF EUROPE.” from Denmark, Finland, Iceland, Norway, Sweden, Latvia, Lithuania, and Estonia Features (mostly Oscar contenders) and shorts that you can watch them online.

To learn more about the festival we had an interview with festival’s director and founder James Koenig:
Bijan Tehrani: Please tell us about the 2021 Scandinavian Film Festival LA during the pandemic 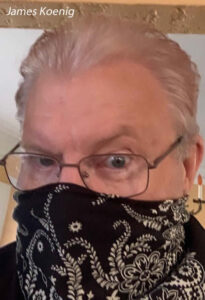 James Koenig: Facing the 22nd year of Scandinavian Film Festival L.A. with BalticFilmExpo@SFFLA almost a year into a global pandemic I had questions flooding my mind— like “How?” “Is there no recourse but to cancel?” “How in the world could we deal with the technology of going virtual?” My thoughts wandered to the title of Columbian author Gabriel Garcia Márquez’s novel and later movie “Love in the Time of Cholera”— I pictured the title “FILM FESTIVAL IN THE TIME OF COVID.” Mind you, I was just dealing with a film from last year’s festival that was lost in the process of shipping— simply gone missing at the Writers Guild— and I had to pay to replace it. Prospects were gloomy.

I think everyone would agree that this has been the craziest year ever with COVID-19 taking it’s toll on our lives. The numbers are staggering— and some act “victimized” because they can’t get their nails done and their roots are showing. Talk about surreal— but all the more reason that images on screens and the sharing of our stories— our lives, really— is so important. At first I thought there wasn’t much choice but to cancel the festival this year. But I agonized over it because I didn’t want to disappoint our audience— and in our own small way, I didn’t want the virus to win. In the course of exploring the various issues of “going virtual” the opportunity of combining efforts with Scandinavia House in New York developed and helped us both carry on with our bi-coastal efforts. So here we are….

I’ve been acquainted with Kyle Reinhard at Scandinavia House in New York for years. We both worked with a wonderful, wonderful Danish woman Jytte Jensen, who was one of the heads of the film department at MOMA. Scandinavia House in New York has been doing their Oscar screenings for around 20 years. Over the years we’ve shared information, shared prints and all that—When we started we were dealing with films on reels. We would both be watching the weather reports because sometimes a film would screen in one place or the other and had to go overnight for a screening the next day on the opposite coast. Collaborating would be so helpful on all sides— and hasn’t this whole time been about helping each other? I suddenly had fewer apprehensions about a virtual festival. And on it goes— we would not take “no” for an answer and “the show must (and will) go on!

BT: Are there any Oscar selected films among the films participating in 2021 SFFLA?
JK: Programming for the virtual coast-to-coast collaboration is a bit different than in the theater. The first week-ends of the festival are strictly Oscar entries from the Nordic countries and the Baltic countries— Denmark, Finland, Iceland, Norway, Sweden, Latvia, Lithuania, and Estonia.

BT: Are there any US premieres among the films?
JK: There are a number of U.S. premiers— for instance the wonderful bio-pic TOVE about artist, author, illustrator Tove Jansson will be a U.S. premier. There are others as well— but that pops into mind.

BT: How do film fans get to watch the festival films?
JK: We are all becoming more acquainted with technology. It wasn’t that many years ago that people would complain and say “I need to get something in the mail— I don’t do email!” Now nearly everyone does email, and FaceTime, and zoom meetings, on-line purchases etc. On our website www.sffla.net you can find film descriptions and info on how to purchase a Festival Pass or individual tickets. Once you’ve purchased your ticket (via Elevent) you get confirmation email, a link, and instructions. You can watch on your computer— or if you have something like Roku or Apple TV you can watch on your television screen. There’s a small learning curve— but once you “get the hang of it” it’s easy.

Hopefully by next year we will all be back in theaters and concert halls— But the film community and the arts community in general has learned some good things by having to be creative. Virtual does open some opportunities as well. We are all getting used to new opportunities that come from being able to be together when we’re in different cities or even different countries.

To me, the important thing is that we share our stories— and in doing so, we share our uniqueness and our common humanity. We’ve failed if a “people connection” doesn’t happen because of the images and stories we share. It’s all real— Some years ago now, we added the Baltic countries to our festival— We bring you “Top Films from the Top of Europe.” Retired Danish Ambassador Martin Kofod, who was Consul General in Los Angeles and was extremely helpful when we launched the festival wrote to me: “I am really pleased that you are including the Baltic countries in SFFLA. It is more important now than ever to affirm the ties of these countries with the west… and your efforts have a distinct diplomatic component.” The thing is— stories aren’t just “stories”— they’re real life.