You are at:Home»Feature Story»SEEfest announces nominees and jury for Bridging The Borders Award

Burbank, CA – April 10, 2018: Cinema Without Borders is proud to present its Bridging The Borders Award for the 10 Consecutive year at the prestigious SEEfest, South East European Film Festival LA. Bridging The Borders Award offered by Cinema Without Borders and sponsored by GoEnergistics, goes to the Best Feature Film screened at SEEfest and for the 13th Edition of the festival it will be announced at the Award Ceremony on May3rd at the Writer’s Guild theater.

Jury members for Bridging the Borders Award assigned by SEEfest are:

Therese Hayes has programmed films for the Palm Springs International Film Festival for the past 17 years as well as other world cinema festivals in Bangkok, Mumbai, and is the co-curator of the Indian Film festival in Stuttgart, Germany. She is also working with the Heartland Film Festival in Indianapolis, and is on the board of Film Trust India, and works as a consultant on Indian films to international festivals. Therese was raised in France and London, and studied Far Eastern Civilization at the University of Washington in Seattle.

Sandra Seeling Lipski is the founder and director of the Evolution Mallorca International Film Festival (EMIFF), in Palma de Mallorca, Spain. She is an accomplished actress with notable credits such as CSI NY, Bruno, and Jane the Virgin (CW), and serves as Director of Programming on the film festival team at MissionFest in San Fransisco. In 2017 she was on the juries for the Mammoth Lakes Film Festival and Los Angeles Music Video Festival. Sandra holds a degree in dramatic arts from the Lee Strasberg Theatre Institute in New York and is a graduate of the Los Angeles Film School.

Jacques Thelemaque is an award-winning writer, producer and director who founded the Los Angeles filmmaking collective Filmmakers Alliance in 1993 and FA Productions in 2004. He was also Chief Community Officer of Withoutabox.com in 2005. Jacques has also been a programming associate at the Los Angeles Film Festival since 2011 and has been an advisor, board member, programmer, juror or invited speaker at numerous film-related organizations and events.
Jacques has written and directed numerous short films, including “Transaction” which played at the Sundance Film Festival, and won the Grand Prix du Jury Award in the Labo Competition at the Clermont-Ferrand International Short Film Festival. He also wrote, directed and produced the feature film “The Dogwalker” as well as produced five other feature films.

Suspense mounts after Andrei and his father Vasile receive news of an inheritance that communist Romania won’t let them claim. As they try to get travel documents to go to Yugoslavia, a cat and mouse game ensues with the Secret Police, and a love affair gets in the way. Will they succeed? – This screening is supported by the Blue Heron Foundation.

In this award-winning comedy-drama, Alan is a successful graphic designer who can’t find happiness in his love life. After a break-up, he goes to the picturesque island of Vis to seek inner peace, but finds himself torn between his eccentric father, another ex-girlfriend and her fiancé. New situations and circumstances will help Alan see his own life from a new perspective. 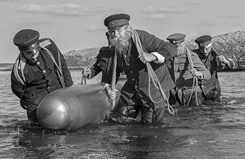 Set in 1913 during the Balkan Wars, this satire follows a group of desperate Bulgarian soldiers trying to transport a boat over land, hoping to torpedo an off-shore Turkish battleship. Along the way, they gradually befriend some Turkish soldiers. Ultimately, the disagreements between the Bulgarians themselves might turn out to be more powerful than their hatred for their enemies. 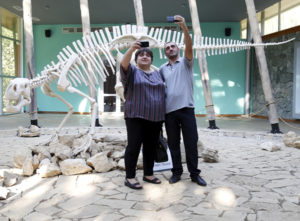 After returning home from 14 years in prison, Gogita longs for a nice marriage. He starts online dating and meets Maka, who is not the prettiest woman, but can bake delicious cakes. Soon they are making grand plans without even having met. What unfolds is a tender and humorous glimpse into the lives of two simple people looking for love in an overwhelming world. – This screening is supported by Paper or Plastik café and Yasha Jacob Michelson.

Set in 1918, this suspenseful war-drama finds five Austrian-Hungarian-Romanian soldiers sent to infiltrate deep behind enemy lines and destroy an Italian command post. As Sergeant Fodor, Romanian Radu, Austrian corporal Kramer, Molnar the bolshevist, and the young 17-year-old pigeoneer The Kid fight their way through the mountains, they realize they may not return alive from this mission.

Nearly twenty years after the war ended in Yugoslavia, a diverse group of veterans gathers in an empty hotel to undergo therapy for their post-war traumas. A Balkan all-star cast excels in this powerful psychodrama about the ability to forgive others only after we have forgiven ourselves.

With two weeks of preparations left before they get married, Bekim and Anita are enjoying their comfortable urban lifestyle. An unexpected visit from Bekim’s best friend Nol brings tension into the seemingly happy relationship, with secrets bubbling just under the surface, threatening to derail the wedding.

Alić, a Bosnian miner and refugee in Slovenia, is sent to inspect an abandoned mine. Digging deep in extremely dangerous conditions, he discovers a hidden mass grave, dating back to WWII aftermath. When told to report the mine empty, Alić instead informs the police, hoping to find justice for the unidentified victims. Based on a true story.

Even with the help of his daughter-in-law and grandson, Shamil is too old to take care of his vast and lush pomegranate orchard, which has been his pride and livelihood for many years. When his prodigal son, Gabil, unexpetedly returns after a twelve year absence, they are ready to believe his promises in spite of the deep emotional scars Gabil left on his family. Inspired by Anton Chekhov’s The Cherry Orchard.

Vele, a poor train mechanic, lives with his sick father in the outskirts of Skopje. After he finds a bag of marijuana in one of the coaches, Vele makes a space cake for his dad. This new medicine works wonders, and Vele quickly becomes a hero healer in the whole neighborhood. That is, until the criminals show up…

Alban is a lonely teenager who lives in Amsterdam with his mother, Zana, a refugee from Kosovo. Alban’s troublemaking streak ends after he gets a job and meets Ana. But when Alban and Zana travel to Kosovo to attend a funeral, previously-hidden traumas of war resurface and turn his world upside down, putting his relationship with Ana at risk.

About SEEfest
The 13th South East European Film Festival Los Angeles (SEEfest) runs April 26 – May 3, 2018  is a competition festival presenting cinematic and cultural diversity of 18+ countries of South East Europe to American audiences. SEEfest creates cultural connections through films, artistic and social events.
Each year the festival takes the audience on a journey to the cinematic and cultural crossroads of the countries along the Danube and across the Balkans, touching on the Euro-Asia divide on the eastern shores of the Black Sea and the Caucasus. SEEfest is showcasing independent cinema and providing a platform in the U.S. for the discovery of new talent from South East Europe.
http://seefilmla.org/

About GoEnergistics
GoEnergistics is dedicated to “Serving Those Who Serve”
Federal and Private Sector healthcare facilities form the back-bone of an industry focused on healing environments and serving the needs of their patients. As a trusted partner of choice, GoEnergistics’ mission is to dramatically improve healthcare buildings and delivery systems to empower optimal performance and promote the best possible care. Whether it is planning services, design, procurement assistance, medical equipment installation, logistics support or “all-of-the-above,” GoEnergistics is committed to “Building Solutions that FiT Your Healthcare Needs.”