You are at:Home»Film Reviews»A Season in France review, a film by Mahamat Saleh Haroun

The habitual calm and gentleness of Mahamat Saleh Haroun’s film-making here has a sharp edge and an overtly political point – as well as a flourish of violent destruction and despair that blindsided me. This Chadian director, who lives in France, brings the African experience to Europe in a deeply felt, compassionate film about refugees who find that one of their bitterest abasements is the loss of dignity and status. 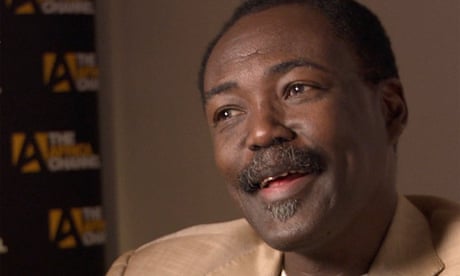 Mahamat Saleh Haroun brings Chad to the world, and vice versa, through film

These are proud people, who left behind prestigious jobs in their homeland, now forced to take on low-paid work or ask for handouts while their various appeals and applications grind through the intensely policed asylum system. They are people who suffered terrible losses in making it this far, and have to resign themselves to all these wounds being invisible to the state agencies from whom they are asking help. And male pride can be an important, even tragic factor.

It is the story of two brothers who have escaped together from Bangui in Central African Republic: Abbas (Eriq Ebouaney) and Etienne (Bibi Tanga). They both held academic teaching positions at home but in France have to make do with cash-in-hand jobs: Abbas heaves crates around in a fruit and veg market and Etienne works as a doorman. Against this, Haroun allows us to absorb the irony of the heavy-set security guys positioned in the government appeals office, ready to get tough with any desperate refugees who won’t accept the official decision.

As for Etienne, he is feeling a similar malaise, living semi-rough in a shack by the river, but maintaining the habits of an intellectual. He still reads seriously. Yet the situation is taking its toll on the relationship he is having with a woman there. It is Etienne for whom the agony of the situation is to become too much to bear, and manifests itself in a tragic, shocking act.

The film’s best moments are when Carole and Abbas are having dinner at her flat, along with the children. Abbas has taken the decision not to open the most recent official letter he has received until the dinner is over – in case it’s bad news. Haroun simply lets the scene run, from the meal to the impromptu dancing afterwards, and there is a marvellous ease and a charm to it.

Ultimately, there is an awful reckoning coming. Haroun has a coup in his final scene, bringing us to a strange, empty wasteland in northern France. Finding out what this place is provides an education you won’t get from watching the TV news.

This film reminded me of a comment that the dramatist Martin Sherman made in Vanessa Redgrave’s documentary Sea Sorrow: that refugees are in a state of shock, their impassivity and calm mask an inner pain at suppressing their anguish at what and who they have lost. Ebouaney and Tanga show this too. It is possible that the title is intended to trigger an echo of Rimbaud’s A Season in Hell. Hell is the place that the refugees are escaping, but their purgatory continues in the prosperous west.