You are at:Home»Festivals»SASHKA at 2019 Polish Film Festival Los Angeles

In SASHKA (2018) – a short film by Katarzyna Lesisz that will be screened at 2019 Polish Film Festival Los Angeles, Sasha, a young Ukrainian, receives a message about death of a man with whom she took a fictional marriage to get Polish VISA. The funeral of her husband gives her an opportunity to meet her beloved Piotr, who arranged her marriage years ago and decided to leave her with no explanation.

The following is our interview with Katarzyna Lesisz, director of SASHKA:

Bijan Tehrani: How did you come up with the idea of SASHKA?
Katarzyna Lesisz : I was always interested in telling stories about people who are in search of identity in a foreign place that they would like to call a real ‘home’. I’ve already made two short documentaries about it: ‘My brother’s life’ in Iceland and ‘A New Tomorrow’ in Belgium, both about feeling homesick, but for different reasons. I think that if you want to escape from your own country or from your present life, the most difficult thing is not the escape itself – it is to find yourself in a new place. You are not aware of how overwhelming loneliness and fear of being homesick may exhaust you to the extreme

I’ve tried to make another documentary about three Ukrainian women, but it was very difficult due to polish regulations – the women were afraid of the possible consequences of the movie because they were illegally in Poland. Then I met Justyna Bilik, a student of a screenwriting department of my school (The National Filmschool in Lodz). She told me she’s working on an adaptation of the Etgar Keret’s story and it is going to be about a Ukrainian girl who comes to Poland and takes a fictional wedding. It became clear to me – if I can’t make a documentary, I should tell the story I want in a fictional movie. 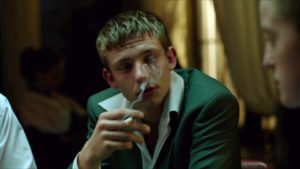 BT: SASHKA is quite sophisticated and we witness a change happening in her through the film, how did you develop her character?
KL: I was imagining SASHKA as a fragile young woman, insecure, scared of a new life and the country she moved in. I recreated her political surroundings and rules that every Ukrainian person needs to proceed to stay in Poland. But when I met Daria Polunina, the actress who played Sashka, I was given a second view in our script.

Daria is originally from Ukraine, has never left her country for more than two weeks. When she first came here to Poland, she could hardly speak Polish and with her little English, she felt lost. Then I realized that every time you leave your home town, your country, you need to simply define yourself in a new way. Especially when you’re young and you need to fight for your rights. I think that, in some way, Daria became Sashka, she showed me not only a new face of my movie character but also a strong young woman who learn how to choose for her own life.

BT: Dealing with past is an important part of your film, did you pick this issue as it is a universal problem?
KL: I think the sentence from Jean Paul Sartre explains everything ‘Freedom is what you do with what’s been done to you’. It is not possible to cut yourself from the past because the past will always find a way to get you, no matter where you are and what you do. I believe that dealing with your past is the only way to overcome your fears, to exceed your limits, to discover yourself from the beginning. And that was the process I believe SASHKA went through.

For me, SASHKA is a story about finding yourself, your inner-self, it is a story about making decisions that stay with us for our whole life and taking responsibility for them. When you ask if dealing with the past is a universal problem, I fell more like not taking the responsibility for what you did in the past is more universal. In the movie, SASHKA is not struggling with her childhood, but with her youth and the decisions she made.

BT: How did you go about casting your film?
KL: It was very difficult to find the main actress. I’ve tried many ways, we organized castings in Poland, asked the actors agencies, all unsuccessful. The Lviv Film Commission send the email to the professional and non-professional actors in Ukraine. I received almost 300 emails, proceeded over 20 conversations on skype and still nothing. I must say, after 6 months of searching, I lost hope. But then I went through all the emails once again and I saw Daria Polunina. She sent me only three pictures, nothing more. So I wrote to her and ask for more details. She sent me the short commercial she played in and I knew she is perfect. The only problem was she was too tall for the playing actor, so I had to find a new Piotr for her, a tall and talented one. And believe me, it wasn’t that easy and I was just about to give up until I met Mateusz Król. 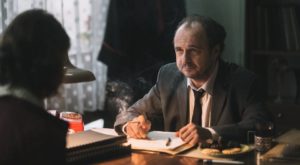 BT: Did you allow any improvisations by your actors? How did you work with them?
KL: I invited Daria Polunina (SASHKA) to Poland a month before the shooting. I wanted to know her better and to create a space for the discussion about the script. We had time to talk about every aspect of SASHKA’s life, past, present, even the future which is not on the screen. I made a lot of rehearsals after which we often decided to change the script.

I always work with the actors, not with the script, which means, that I believe in actors’ intuition. If I tell them all the details about the character, about how I imagine the character would act in different situations, I don’t care about the script any longer. The script for me is the starter, it is crucial, it is like a bible for the movie. It gives you the rules and tells where the story goes, but the story is being told by the actor, so I gave her/him the last word. If we feel the scene is false, we search for the solutions. I wish my actors to play like they were documentary protagonists. Sometimes we just sit and observe how people behave and it is also a rehearsal for me.

BT: Did you work closely with Justyna Bilik on the script of the film?
KL: I didn’t know Justyna before we start working, so I was afraid how this cooperation will look like. To my surprise, we felt the same way about Saszka character but had different points of view about men’s role in the movie. I guess Justyna must have written over 50 versions of the script and it still wasn’t the end! She also worked on the set as the director’s assistant and the script. I think we were complementary, Justyna took care of the structure in the script, I was in charge of the emotions and relations on the set. I believe we passed the test very well because now we are working on the new script together.

BT: The visual style SASHKA is amazing, please tell us how did you come up with this style?
KL: I worked with very talented cinematographer Michal Dymek. I must say, that day I wasn’t into the visual stuff very much, for me the emotions and actors were most important. So Michal did most of the conception of cinematography, he made up the style of storytelling from the beginning. I remember we couldn’t decide on the format for a long time. The decision that the movie is going to be in a 4:3 format was made in the middle of the shooting! It was crazy, I would never do that again.

We discuss a lot about how to show the past scenes. We didn’t want to make it on the post production, so we decided to define it by different times of the year. The past time was shot during the summer when SASHKA believes in love when she’s young and vulnerable. Summer is warm, bright, fresh, colorful, innocent. The present time was shot during the winter. It is a time when her husband dies and she becomes alone. It’s grey-blue, dark, sad. The only scene that links those two is the sex scene, that takes place exactly during New Year’s Eve party.

The color palette was settled at the beginning of our shooting time and it’s not changing at the end, but it doesn’t mean that SASHKA is not ready to move on. She gives us a little smile at the end, it’s just a smile, but very quickly it changes our view of the whole film.

BT: What do you think about the importance of Polish Film Festival LA in promoting the Polish cinema in Hollywood?
KL: I can’t imagine a better place to show SASHKA to the wider audience in LA than the Polish Film Festival. I believe that every single person, who lives in LA and has an interest in Polish cinema, will go to this festival and will see the best selection of polish feature movies, shorts and also documentaries! I am very happy and grateful for that opportunity! I hope Saszka will find a place in LA’s people hearts. 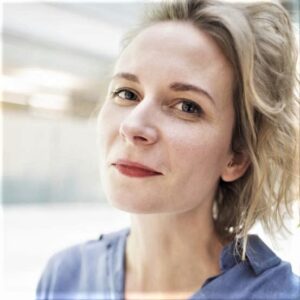 Katarzyna Lesisz is a graduate of the renowned Film School in Lodz, Poland. Her short documentary “Dancing for you” (2018) has won the main prize at IDFA for Best Children’s Documentary in the Kids & Doc section. “Sashka” her recent short fiction has won Grand Prix at the Ca ‘Foscari Short Film Festival in Venice, Małopolska Film Award at the Gdynia Film Festival. Her credits as director include “My Brother’s Life”, “A New Tomorrow” and “Our little game” which was screened at numerous foreign and national festivals.