I don’t know why I was avoiding watching “Sara & Ayda”, may be the title wasn’t attractive enough for me…but at last I convinced myself to see it as I thought a film by Maziar Miri, can’t turn up to be a lousy one.

But unfortunately the day that I picked to see the film was a Tuesday, a day that in Tehran movie passes are half priced. We ended up to see the film in late show at Farhang movie theater, but now I wish we had picked another night of the week, because the sound effect of everyone chewing chips and babies crying didn’t let me to concentrate on the film. All those babies and little kids in the theater should have been deep in sleep at that time of the night.
I said all this to advise everyone including myself to avoid going to theaters on Tuesdays in Tehran!

The very first shot of the movie shows the face of a girl in the dark that later we learn with the bitter and unavoidable reality she has to face.

Ayda and Sara are close friends that through events in the story face many serious challenges. One of them comes across a man who is a charlatan that abuses his power to make money and It seems to us that she has no knowledge of it and The other one has exactly the opposite than her situation.

And we meet the Sara’s old mother, a retired teacher who is regretful for her whole life : “ I helped to raise kids of others with good manners, but I failed when it came to my own son” and therefore the miserable mother has to pay the price of his son’s scams and Sara falls deep into a dark trap when trying to help her mother that getting out of it is impossible.

The amazing performance of Ghazal Shakeri as Sara and her silken voice, singing in her loneliness for the lose of her dearest friend with a song, her back to the camera ……makes you sad, and I better stop mentioning other performances in the film as they are not comparable.

Pegah Ahangani’s acting and specially her way of delivering dialogues always disturbs me. I can’t remember a good performance by her and again it could be more about her vocal performance.

The story of the film is quite solid and different elements fall in place like a good puzzle . 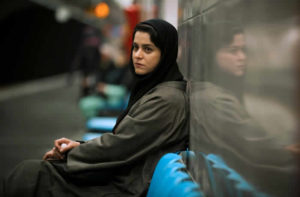 Most of the film locations and camera angles together convey the feeling that all the event of the film is happening above the city level and dominate the city.

The masterful cinematography of Hossein Jafarian has his signature in every single shot. Bravo Mr. Jafarian.

In the first sequence that I saw Sara in an office attire, I told myself what a great costume design, pleasant for eyes, bravo Shiva Rashidian.

And I should appreciate the good job Maziar Miri has done as director knowing the difficult circumstances under witch he works.