You are at:Home»Videos»Sahar international short film festival announces the winners 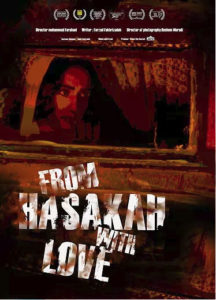 Festival’s Jury award :
The Contemporary Iranian Cinema: “From Hasakah With Love” by Mohammad Farahani
The International Cinema: The Joint Award to “Identity” by Juan Carlevaris and “Rattling Fan” by Pasang Dawa Sherpa
​
Mandana Ansari, co-founder and director of the festival said: This year we are honored to have a cinematic 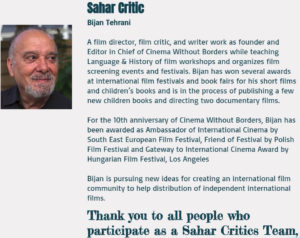 professional critics award. Bijan Tehrani is one of the members of the panel of critics. He is a director, film critic and runner of festivals.
The panel of critics judges contained, critics, artists, and lecturers… Some of those would like to keep their name anonymous

A short clip about Kurdistan was screened. This short clip contained poetry by Mandana and photos by Sahar Ansari, about victims of an earthquake on 12th of Nov in Kurdistan.
Sahar Ansari is Mandana’s daughter and another member of Festival management.

Short films were produced in Iran, Spain, Italy, Brazil, Peru, India, Nepal, Bangladesh and the UK. Genres include animation, drama, narrative, experimental, science fiction, comedy, supernatural thriller, horror, and documentary.
The festival creator and director, Mandana Ansari gave a short talk. She started with welcoming the audience. She said “This festival is not just about entertainment, it’s provided a platform for emerging and established filmmakers’ to screen their work

Mandana Ansari added: I believe the filmmakers are translators of the world around them, which come from culture, society and personal experience. We share their world with our audience, to focus and experience other people’s lives”.

The sideline of programme carried on with presentation of awards
At the end of the day, the audience celebrated the festival with Irish dance. Dancers were from Claddagh Irish Dance Group in Manchester.
This group also performed at the third edition of Sahar international short film festival.