You are at:Home»Film Reviews»A review of the Venice winner, Los Versos del Olvido, a film by Alireza Khatami

Set in an unknown Latin American state (the film was presumably shot in Chile), there are moments that recall Pablo Lorrain’s second feature, Post Mortem, which also dealt with morgues, death squads and the trauma of unclaimed corpses in a corrupted land. But here, the narrative is much more opaque, pushing viewers to clutch at straws in order to follow Khatami’s different plot strands, which shuttle between reality and fantasy without warning. A premiere in Venice’s Horizons section should give this four-country co-production a small boost in overseas markets.

As esoteric as it may seem at times, Verses mostly follows one character: an elderly caretaker (Juan Margallo) who works in a godforsaken cemetery located in the hills above a major city. The place is nearly deserted, with the old man — who, like all the characters, remains unnamed — doing his best to keep the plants watered and the graves in decent condition. Although he’s mostly on his own, unveiling cadavers at the morgue to weeping relatives, or filing archives in the cemetery’s cavernous basement, the man sometimes has conversations with a gravedigger (Tomas del Estal) and hearse driver (Manuel Moron) who seem to share his dark view of life.

The old man’s routine is broken up when a group of faceless assassins (presumably a government-sponsored paramilitary group — there are lots of things to presume here) show up at the cemetery to commandeer the morgue for themselves, filling it with bodies linked to some sort of social upheaval taking place in town. The men beat the caretaker and drive him out into the desert, where he comes across a giant hand sticking out of the sand, Planet of the Apes-style. When he eventually makes it back to the cemetery, he finds out he’s been fired, but persists in returning to save the body of a young woman who was left behind during the ruckus. 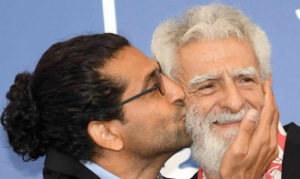 That plot point could offer a strong hook, but Khatami eschews straightforward storytelling to mix in references to the old man’s vanished son, anecdotes from fellow workers, a few Gilliam-esque sequences in the bowels of the cemetery and another subplot involving a family of beached whales who would rather die together than be separated. If such a metaphor seems rather, um, heavy in the way it connotes the sense of loss felt by those whose love ones have disappeared, it does provide a few moments of visual poetry, particularly in the film’s closing sequence.

Even if Oblivion Verses can feel too abstract for its own good, Khatami — who directed part of the omnibus film Tapei Factory, which played Cannes in 2013 — has a real talent for creating images of abandon peppered with surrealist touches. Working with French DP Antoine Heberle (Paradise Now, Grisgris), he deftly captures the desolation of the caretaker’s world, punching in on details like bees pouring out of a cracked tomb, or blood streaking across the floor of the morgue. Such haunting moments linger in one’s mind despite the somewhat muddled narration, and one is ultimately left with a vision of humanity tied down by memories of the dead — alive but living in oblivion.