You are at:Home»Festivals»“Retouch” and “Lunch Time” win awards at the Ojai Film Festival

According to Bita Elahian, Cinema Without Borders reporter, at the closing ceremony of the eighteenth Ojai film festival, Retouch, a short film directed by Kaveh Mazaheri, and “Lunch Time” directed by Alireza Ghasemi were awarded with the Best narrative short Film award. 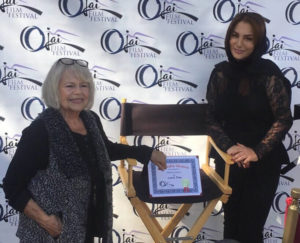 Bita Elahian, who is also an Iranian/Americans filmmaker received the award on behalf of Alireza Ghasemi.

24 short films competed during the festival. In addition to “Retouch” and “Lunch”, two other fictional short films “Not yet” directed by Arian Vazir Dafteri, “Light Site” directed by Seyed Moslem Tabatabaie along a short documentary “Weavers of Imagination” Directed by Mohammad Sadegh Jafari, all Iranian productions were screend at the festival.

The Ojai Film Festival goal is to establish a relationship between filmmakers of the best short films and to help young people to show their talents every year.

Although the Ojai Festival has not been approved by the Academy of the Oscars, however, in the past 18 years, there have been 15 Oscar short nominated shorts that had received the Best Short Film Award from at the Ojai festival.

The eighteenth edition of the festival was opened on November 2nd and will continue until November 12th in the city of Ojai, in Southern California.