You are at:Home»Film Reviews»The repetition of oppression and loneliness of women, SUBDUED, a film review

Whenever you want something from bottom of your heart, all conditions come together like pieces of a puzzle to stop it from happening. This exactly what happened during the theatrical release of the Subdued and I was not able to see this film. I had been waiting for a few months for the DVD release of the film that started last week. And tonight, I watched it.
*
The participation of Leila Hatami in any film could be a strong enough reason to watch it. Here in Subdued, her strong presence and her emotional and delicate style of acting aims at your heart. May be at the era of cosmetic surgeries and heavy makeups, the neat face of Leila is quite sweet.
* 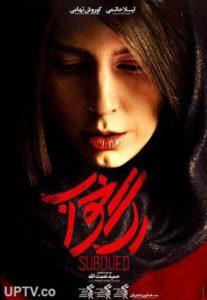 The first sequence of the film opens in front of a courthouse. Mina, a young woman (Leila Hatami), divorces her husband because of his drug addiction and all her concentration and feelings is for her father that we do not see him till later in the film. It’s only then that you can put together the pieces of the puzzle that makes Mina’s father….he has been against his daughter’s marriage and had cut his relationship with her after that.. For Mina, her father is a like shadow that she talks too all the time. In her dream, Father, is the only one listening to her story.
Mina is looking for a job and in this process, meets Kamran (Kourosh Tahami) and falls for him and only at the end of the film learns about his lies and unfaithfulness. The story of the film is not too complicated and unpredictable….. but it has its own kind of suspensions.

The slap that you feel in your throat all through the film, does not leave you even for a moment.
At the beginning scenes of the film you can find out about the relationship of Kamran and his lover (the women that owns the fast-food restaurant that Mina has started to work there)…..when Kamran talks to the woman and she answers in French: “D’ACORD”.

Kamran uses French to express his love to Mina and very soon, lack of self-confidence and loneliness captivates her in the cage love.

This is a character based movie and you witness how a love helps a lonely woman that has hopes for a better future find her desires again and how when she discovers that his man is a liar, breaks down and loses herself.
Leila’s performance puts her even above the recognition she has received as one of the best women actors of our time. And along her part, other performances are all good and natural.

Against the fact that there is are many repetitive scenes in the film…..you don’t feel the presence of the camera and lighting that I think helps to make the story believable.
Set design is at the service of the film. Editing and the music track is delicately and pleasantly and helps to relay the concept. The heavenly voice of Homayoun Shajarian over Sohrab Pour Nazery music is among strong points the film.

Film could have parallel stories along the main plot to make it more attractive, but the director, Hamid Nematollah had preferred that all the concentration of the audience follows Mina through her life and therefore get to know her more….Mina is the narrator of the story and you never see any other character alone. That’s why we should see the Mina’s version of her story.
*
The repetition of oppression and loneliness of women.