LUCAS – International Festival for Young Film Lovers, announced the winning films of the festival in an award ceremony in Frankfurt, Germany. 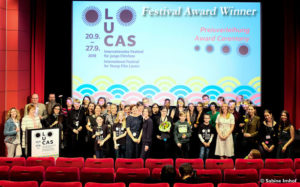 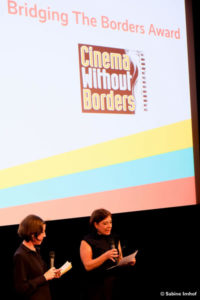 The interview was followed by announcement of the GoE Bridging The borders Award and Yeganeh Taheri, a CWB jury member, read the jury

statement: “Cinema Without Borders editor in chief Bijan Tehrani ,along with our jury members, editors and reporters in Hollywood and other parts of the world want to congratulate Lucas for organizing such an amazing film festival. We also want to thank Bridging The Borders Award sponsor Go Energistics for their support in offering our award to a film that helps bring people of our world closer together.

We want to give an honorable mention to the film Amatorer directed by Gabriela Pichler, in which the people of a small Swedish town videotape themselves to impress a large corporate store potentially opening there.

The Bridging The Borders award goes to a film with excellent direction, acting and cinematography that offers a modern day twist on Romeo and Juliet. Two families and a society are divided by their politics and prejudice towards taboos of sexual identity. The winning film is RAFIKI, directed by Wanuri Kahiu.”

Rafiki also won a cash award of €3000 by the international Jury of the Lucas International Film Festival For Young Film Lovers. 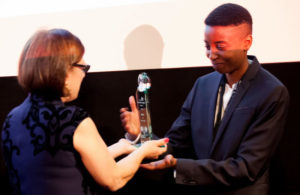 RAFIKI
Skateboard, football and male friends; Kena refuses to conform to other’s expectations not just visually, with her short hair and cap. Ziki, with her colorful dreads also doesn’t think about fitting into any traditional roles. How wonderful that both of them can’t keep their eyes off each other! Even though their fathers fight each other in the capital Nairobi for a ministerial post, and homophobia as well as religious bigotry are all around them, the two young women begin to bravely and independently live out their attraction. A colorful, queer-feminist statement film!
Director: Wanuri Kahiu
Producer: Steven Markovitz
Cinematography: Christopher Wessels
Cast: Nini Wacera, Samantha Mugatsia, Sheila Munyiva, MORE