Cinema Without Borders has announced Primavera directed by Carlos Porto de Andrade Júnior from Brazil as the winner of the Mozaik Bridging The Borders Award at  the 2021 Ramsgate International Film & TV Festival, UK.

The Soul of a Cyclist  directed by Nuno Tavares from Portugal also receives Bridging The Borders Award Honorary Mention.

Marcy Garriott is an independent documentary filmmaker based in Austin, Texas. An electrical engineer and still photographer coming out of college, she was a telecommunications executive for 15 years before turning to filmmaking and social activism. Her Director/Producer credits include the award-winning documentary films SPLIT DECISION and INSIDE THE CIRCLE. Marcy also produced THE LEAST OF THESE (about immigrant child detention) and the CNN documentary AN UNREAL DREAM: THE MICHAEL MORTON STORY. Most recently she served as an Executive Producer on the documentary films PEACE OFFICER and BUILDING THE AMERICAN DREAM. Marcy is a former board member and President of the Austin Film Society, and a current Advisory Board member of Cine Las Americas

Chale Nafus – Born in Dallas during World War II, Chale Nafus attended public schools, spent summers on his sister’s ranch in Comanche County in the 1950s, learned Spanish from schoolmates, and dreamed of getting out of Dallas. After getting through freshman year at SMU, he worked at Texas Instruments before realizing he really needed a college education. After attending the University of Texas at Arlington (B.A., English), La Universidad Autónoma de México, and UT Austin (M.A., English/RTF), he began a long college teaching career at Texas Southmost College (Brownsville), La Universidad de Puerto Rico at Mayaguez, Borough of Manhattan Community College, Kingsborough Community College (Brooklyn), and finally Austin Community College (1973-1998). At the latter, he founded the Department of Radio-TV-Film, taught classes in film studies, and for seven years served as Chair of Humanities (Northridge Campus). Retiring in 1998, Chale spent 4 years traveling and writing before joining the staff of Austin Film Society as Director of Programming (2002-2015). He is now totally retired and happily serving on the boards of Austin Film Society and OUTsider Fest as well as the advisory committees of IndieMeme (South Asian film organization) and Cine Las Americas. 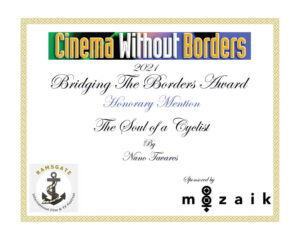 MOZAIK Bridging The Borders Award Honorary Mention
The Soul of a Cyclist
Portugal | 73 mins | U
directed by Nuno Tavares
Through a group of “classic” cyclists and their common interest in the classic bicycle, we’ll discover values that are being lost in our modern society, such as the importance of friendship, ecology, valuing the old, minimalism and, other important premises to achieve a happier, simpler and more fulfilled life with what really matters. As in life, in this documentary, bicycles transport us in our discovery, in our reflection. 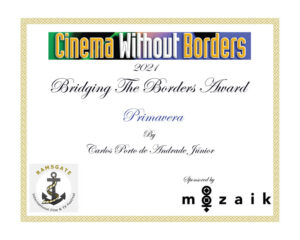 Winner of the MOZAIK Bridging The Borders Award
Primavera
Brazil | 113 mins | U
directed by Carlos Porto de Andrade Júnior
Moments before a father’s death, all of his family memories are transferred to his son through a dream. This story is told in parallel with an investigation by two cousins who are writing a book about the family. All that is left are fragmented evidences, destroyed photos and the oral history. The narrative develops a different visual language to guide us through this saga about an unusual family made up of contradictory versions. The ancestor, an Englishman living at the end of the 18th century, arrives in Brazil and gets married to a Portuguese lady, owner of an extensive piece of land. Their heirs will become the protagonists in this history of conflicts, legends and mysteries. Love will lead to death but the supernatural will inspire love again.