You are at:Home»Conversations»Pouran Drakhshandeh talks about Under the Smoky Roof

Last Thursday, was the opening night of Under the Smoky Roof, a social drama directed by Pouran Darakhshsnde at the Fine Arts Theater, Los Angeles. We had the opportunity to interview the director after the screening.

Under the Smoky Roof, is the story of a broken family, Shirin who has problems with her husband and child is searching for a way to communicate with them and solve her family problems but she can not succeeded in that so reaches a crisis. Her second try to get out of this crisis makes her to confront new challenges.

Pouran Drakhshandeh director and  producer of Under The Smoky Roof graduated in film directing in 1975 from Advanced School of Television and Cinema  in Tehran. She started her professional career by making documentary films for the Kermanshah Television and subsequently for the Tehran Television. Her motion pictures include Relationship (1986), A Little Bird of Happiness (1987), Passing Through the Dust (1988), Lost Time (1989), A Love Without Frontier (1998), Candle in the Wind (2003), Wet Dream (2005), Eternal Children (2006), and Hush! Girls Don’t Scream (2013). 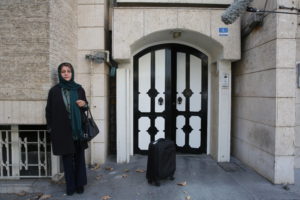 At the time she began working at NIRT and Produced “Plague”; A documentary about plague disease in Kurdistan Province. Next year, she produced a documentary about the “Last Wednesday of the Year” ceremony custom in some areas of Iran, “End Wednesday” (1976). In 1978 she directed “Mineral Springs of Rah Haraz” and a trilogy documentary series about handicrafts in Kurdistan titled, “Moj, janamaz and sajadeh”, “Nazok kari” and “Short–napped coarse carpet”. The four-part “Synthetic and Natural Fiber” was a research documentary about thread, worsted cotton, silk and synthetic fiber. During 1979-1980, Derakhshandeh produced “The Wheels Whirl”. It examines economic and social depression and closed manufactures like Iran National. “Shokaran” focused on addiction. The 17-part documentary explores difficulties for women, men and children who are addicted to drugs, drug smuggling, and means of preventing drug abuse. The production lasted from 1980 to 1982.