You are at:Home»Conversations»POP AYE, Singapore’s Oscar Entry, an interview with director

POP AYE premiered at the Sundance Film Festival where it won the World Cinema Dramatic Special Jury Award for screenwriting and is the official foreign language Oscar entry from Singapore for the 90th Academy Awards.

On a chance encounter, a disenchanted architect bumps into his long-lost elephant on the streets of Bangkok. Excited, he takes his elephant on a redemptive journey across Thailand, in search of the farm where they grew up together – only to discover the truth about himself. 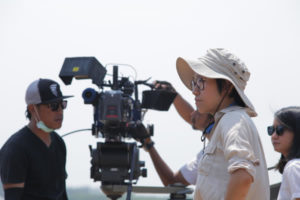 Kirsten Tan is a writer/director with a penchant for visual storytelling and off-beat humor. Spotlighted by CNN’s “Ones to Watch” and Singapore’s national broadsheet, The Straits Times who exhorted her as a “director to look out for,” her work has been screened in over 40 film festivals including Singapore, Rotterdam, Toronto, and Busan.

She has received more than 15 international awards including Best Southeast Asian Short Film for Dahdi (2014), and Best Director for Fonzi (2007) at the Singapore International Film Festival.

Her debut feature – POP AYE – was one of ten international projects selected to participate in the Berlinale’s Talent’s Script Station 2014; Torino Film Lab’s Framework Programme where it won the Production Award, and Cannes Atelier where it was one of 15 selected films featured in a showcase of feature films in pre-production. POP AYE premiered in competition at the 2017 Sundance Film Festival where is won a Special Jury Award Screenwriting.
Selected Filmography:
Pop Aye (Feature), 2017
Dahdi (Short), 2014
Cold Noodles (Short), 2009
Sink (Short), 2009

Cinema Without Borders: Why did you decide to make POP AYE?
Kirsten Tan: Pop Aye was a film that took on a life of its own at a very early stage. As soon as the idea was birthed, things happened almost too quickly for me to think. The first draft was written in two and a half weeks. It was accepted into the Berlinale Script Station, followed by a prize at the Torino Film Lab and then an invitation to Cannes Cinefondation’s Atelier. Since the get go, it felt like there was an invisible mysterious force pulling the project into existence. It was a difficult film to pull off for sure, but I have to admit that as films go, it led a pretty charmed existence.

CWB: Can you tell us about the inspiration for POP AYE. Where did the idea come from and how did the film come to be made?
KT: I’ve always felt like a bit of a wanderer. Before moving to New York, where I’ve been based for the past eight years, I grew up in Singapore and lived in Jeonju and Bangkok. Across these cities, these homes, I was never sure where and when and how I fitted in or belonged, so I’ve always felt for outsiders who don’t sit comfortably within one particular system. Through the gaze of outsiders, we’re also better able to reflect upon the boundaries of the worlds we live in.

For me, Pop Aye is essentially about two wayfaring misfits—in this case, a man past his prime and his displaced street elephant—searching for meaning and belonging in space and time.

CWB: How challenging was making this film?
KT: The film is pretty challenging for a multitude of reasons.

Apart from Penpak Sirikul who plays Bo, the wife of Thana, everyone else is a non-professional actor. They brought with them a level of raw authenticity to their roles that is impossible to replicate, but a lot fell on my shoulders when it came to shaping their performances.

It goes without saying too that Bong the elephant is also a non-professional actor, and Pop Aye is his debut role. I had to understand his behavior quite thoroughly in order to portray him truthfully and to figure out a way to work with him safely and efficiently over our month-long shoot. 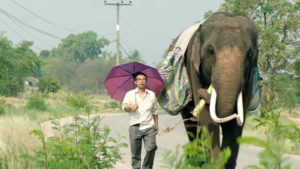 Once I understood the overall tone, I knew what to place within the frame to create its mise-en-scene. We also lensed the film with vintage Hawk anamorphics to give it an otherworldly quality.

CWB: How much of film found its final form in the editing process?
KT: The film’s final form was largely found in editing. In the original screenplay, the story was chronological but that went out the window soon enough. During editing, we felt it was much stronger to begin the story once Thana is already on the road, and to cut back at moments to show snippets of his past life that brought him to this instant. That improved the pace tremendously.

CWB: Do you have a scene that you are proudest of in the movie?
KT: For me, it’s the scene where Thana struggles to climb up the elephant. It says everything about his character—that he doesn’t stop trying till he gets what he wants, but alas, when he gets it, it ends up very different from what he expects, but such is life.

CWB: Please tell us about the critics and audience response to POP AYE.
KT: I’ve been travelling with the film to festivals for close to a year now and I am honestly thankful that responses have been largely favorable. Audiences have complimented the film’s originality, its heart, and of course, our main star, Bong the elephant.

CWB: Any future project that you can tell us about?
KT: I have ideas brewing in my head and hope to start penning them down very soon!