In Playground, Belgium’s Oscar Entry in the Shortlist by writer-director Laura Wandel , the everyday reality of grade school is seen from a child’s-eye-view as an obstacle course of degradation and abuse. Following 7-year-old Nora and her big brother Abel, we see Nora struggling to fit in before finding her place on the schoolyard. One day, she notices Abel being bullied by other kids, and though she rushes to protect him by warning their father, Abel forces her to remain silent, while he endures more humiliation and harassment by his peers. Transposing the gritty realism of such filmmakers as Jacques Audiard and the Dardennes Brothers to the inner world of kids, Wandel crafts an empathetic and visceral portrait of the cruelty of children, and the failure of adults to protect them.

Laura Wandel was born in 1984 in Belgium where she studied filmmaking at the IAD school. Her school film, “Murs”, was selected in many festivals around the world. After her first short film, “O négatif ”, she directed in 2014 “Les corps étrangers”, selected in competition at Cannes Film Festival. “Playground” (Un monde) is her first feature.

Cinema Without Borders: How did you come up with idea of Playground?
Laura Wandel: What inspired me was to start from the world of school because it is a place that we have all known and in which we spent an awful lot of time, minimum 12 years, 8 hours a day! The time we spent in school defines who we become as adults and our later outlook on life. The relationships we built at that time are a mirror of what we experience later, and every playground is like a microcosm of society in general.

CWB: The way you bravely and openly reveal the violence among younger kids, makes your film an eye opener. How has been the reactions to your film?
LW: People have extremely emotional reactions. They come to me after screenings, in tears, I was not expecting my film to have such a strong impact on people.
What was important for me was to show that violence has an origin, violence is always the result of an original wound that was not listened to, not recognized. Violence becomes a weapon to cover this wound. The only way to stop this cycle of violence is through love and taking the time to listen. In our modern society we often don’t take the time. If we take the time, I believe that we can put an end to the cycle of violence. I hope my film will inspire people to take time and listen.

CWB: Is Playground based on real experiences?
LW: Yes, all of it. Some comes from my own memories but most of the film is based on an extensive body of research. I spent weeks in various schools, observing children, especially on playgrounds. That is how I realized that, for instance, the territoriality of the playground is very important. You know there is a picture book with playgrounds all over the world. One common thing is that in the vast majority of the cases there is a football (soccer) field in the middle of the playground. This defines a lot of the way children interact with each other.
I also talked to teachers, parents, psychologists and I read a lot of books on the subject. Altogether, it took me five years to write this script. I wanted it to ring as authentic as possible. Everything that happens in the film, happened in real life. I just weaved several things together. 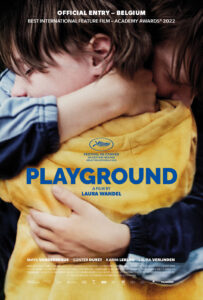 CWB: Kids in the movie are great, How did you cast film and how did you worked with them?
LW: For the role of Nora, I saw more than 200 little girls but when I saw Maya her for the first time I was immediately sure I had found my Naora. And she chose me too. She was only 7 years old at that time and she said to me, right away “I want to give all my strength to this movie”. This was very important for me as I knew I could not make a mistake when casting her, otherwise my film would be a failure.After that, I spent a lot of time with Maya. I taught her how to swim. That is how we bonded.
To prepare the shooting, we worked in a very specific way, because I really wanted to involve the children in the creative process. I knew from the start that I did not want them to read the script. We enlisted the help of an orthopedagogist, a learning coach, who came up with a method to help the children distantiate themselves from their character. This was a very long process and we worked for more than two months with the children.
The first step was that we asked the actors to create a puppet of their character and to talk through the puppet
The second step was that we would explain the beginning of a scene and we would ask them to imagine the rest through the puppet
The third step was to ask them to improvise. So that they would involve their bodies as well. Often they would come up with lines of dialogues that were much better than what I had written and I would go back to my script and integrate their suggestions.
The last step was that we would ask them to draw each scene so that at the end of the rehearsals, they would have their own little storyboard, drawn by themselves. And so when principal photography started, they carried their own storyboard and could go back to their drawings to understand what kind of emotion they needed to project for a specific scene.

CWB: Did you allow any improvisation on the set and during the shoot?
LW: Yes, as I explained, during rehearsals, I used their input to rewrite the script. Also, during the shoot, I would let them interact with each other as much as possible. The sandwich scene for instance, is something that the children created. 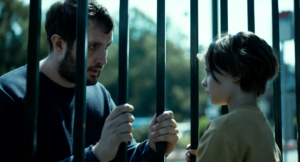 CWB: How did you come up with the visual style of your film?
LW: From the very beginning, I knew I wanted my film to adopt this restricted point of view of children. I wanted the audience to remember what it feels like not to be able to see everything, to have this limited point of view and experience the insecurity that it brings along when you have only a narrow sight on things. In terms of gear, I wanted it to be as light as possible so that children would forget the camera. The DOP had the camera strapped at his waist and I would stand next to him with a little screen to check the image while directing the children.

CWB; How do you see the chances of Playground to receive a nomination or winning an Oscar?
You know, I still can’t believe the journey my film went through over the last year. Especially as we had to put the film in the fridge for a year because of the pandemic. It then opened in Cannes which was the first main film event after the confinement. It was such an emotional time for me. And then it won the Fipresci award in Cannes, the award of the international critics, and then the main award in London and now being on the shortlist among these big names like Sorrentino, Farhadi… this is already much more than whatever I could have dreamt of for my first film! I am already very grateful to the Academy members to have Shortlisted this film. It shows an open mind by giving a radical, demanding debut film with no star power the chance to be seen by the whole world. Of course I hope it will make it to the final five.