You are at:Home»Festivals»Oliver Stone, ‘The Putin Interviews,’ won the audience award at the Sarajevo FF 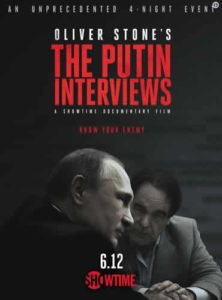 “Within its Tribute To Programme, the Sarajevo Film Festival presented a selection of his [Stone’s] works, including Vietnam War drama Platoon, whistle blower biopic Snowden and his most recent work The Putin Interviews, a four-part series of interviews with Russian President Vladimir Putin,” Altijana Maric, a spokesperson for the SFF, told RT.

She added that the audience at the festival had an opportunity to meet the famous filmmaker during his masterclass and Q&A sessions.

‘The Putin Interviews’ was aired on premium cable and satellite television network Showtime in June this year. It has a score of 80 percent on the Rotten Tomatoes review aggregator website.

The film by the Academy Award-winning director and revered documentary filmmaker presents Putin’s viewpoint of political events since he was first elected president of Russia in March 2000.

Stone spoke with Putin on a number of issues, including Russia’s policies on Syria and Ukraine and the deteriorating relationship with the United States.

Before the film’s release, Stone said it was important that the audience hear what the Russian leader had to say.

“It’s not a documentary as much as a question and answer session,” he told the Sydney Morning Herald in May. “Mr. Putin is one of the most important leaders in the world and in so far as the United States has declared him an enemy – a great enemy – I think it’s very important we hear what he has to say.”