You are at:Home»Conversations»Never Look Away, a Golden Globe nominee & Germany’s Oscar Entry

Never Look Away, a Golden Globe nominee for the Best Morion Picture – Foreign Language and Germany’s  Best Foreign Language Oscar entry is directed by Florian Henckel von Donnersmarck. Never Look Away is inspired by real events and spanning three eras of German history, NEVER LOOK AWAY tells the story of a young art student, Kurt (Tom Schilling) who falls in love with fellow student, Ellie (Paula Beer). Ellie’s father, Professor Seeband (Sebastian Koch), a famous doctor, is dismayed at his daughter’s choice of boyfriend, and vows to destroy the relationship. What neither of them knows is that their lives are already connected through a terrible crime Seeband committed decades ago.

Bijan Tehrani spoke on camera to  Florian Henckel von Donnersmarck about Never Look Away, watch it below:

With his third feature film, Florian Henckel von Donnersmarck, winner of the Academy Award for Best Foreign Language Film, three European Film Awards (including for Best Film and Best Screenwriter), and seven German Film Awards (including for Best Feature Film, Best Direction, and Best Screenplay) for his debut film THE LIVES OF OTHERS (2006), returns to Germany. Here he explores a subject matter that is both unusual and compellingly ambitious, spanning three decades of German post-war history in a suspense-packed drama. It also makes use of a sweeping historical backdrop to tell a highly personal and emotional story through the portrayal
of three human destinies. 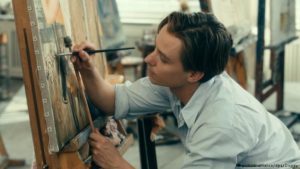 A gripping drama and moving family story inspired by real events, by what it means to create art, and by the search for an artistic voice of one’s own. For Florian Henckel von Donnersmarck, art and the creative process it entails are major themes. He was not yet ten years old when his mother took him and his older brother to the groundbreaking Zeitgeist “exhibition in Berlin’s Martin Gropius Bau” – the exhibition would have a lasting influence on the boy, in a sense also laying the foundations for NEVER LOOK AWAY as it kindled his interest in art.

The actual idea for the film came much later, however, born of Henckel von Donnersmarck’s growing interest in art in general, and more specifically his inspiring encounter with the work of German painter Gerhard Richter, whose life and work serve as one of the film’s many sources of inspiration. “In recent years I found myself continually encountering the work of Gerhard Richter at important moments and with important friends of mine – at the homes of Ulrich Mühe (The star of THE LIVES OF OTHERS), of my agent Beth Swofford in Los Angeles, and of a friend of mine in New York, Noam Gottesman. I was unable to forget these images of Gerhard Richter even weeks and months after I saw them. They were like memorable melodies that continue to dance around in your head. Like earworms. But in this case eyeworms. With the difference that they weren’t annoying, but a continual source of enrichment.”