You are at:Home»Feature Story»Nancy Kelly and the her amazing Thousand Pieces of gold

When I interviewed Nancy Kelly last week, it was like talking to a friend that I knew for centuries. She is full of his hearth talking to you and supper modest and generous in sharing her interesting and exciting stories about making of Thousand pieces of gold.

I have watched Thousand pieces of gold a few times since last week (I can not believe that I missed it thirty years ago when it was released for the first time!) and it’s one of those movies that is like a breathtaking scenery, regardless of how many times you have seen it, it still gives you a joy watching it.

Some critics has compared Thousand pieces of gold to John Ford’s films. Ok, it should be, Nancy Kelly proves like Ford to be a director knowing her characters extremely well and she is a born story teller that makes very entertaining, thoughtful, tasteful and beautiful to watch. In a way Cahiers du Cinéma guys would have called her an Author, even with just Thousand pieces of gold you can see her unique signature on her work. Thanks to Kino Lorber to bring back the treasure of Thousand pieces of gold back to the spotlight. And I can not wait now for Nancy Kelly’s next film.

Here is my video interview with Nancy Kelly about making of Thousand pieces of gold. (Bijan Tehrani)

Nancy is unstoppable. She is now developing a new feature script – When We Were Cowgirls. With any luck, she’ll be out on the range directing a new glorious movie very soon. Thousand Pieces of Gold is being brought back to the screen in a dazzling new 4K restoration digitally mastered by IndieCollect. Founder of the IFP, Sandra Schulberg launched IndieCollect to ensure that signiﬁcant American independent ﬁlms survive for future generations to see. We are proud that our ﬁlm is part of this coterie.

Way ahead of its time, Thousand Pieces of Gold resonates all the more strongly today in the context of the #MeToo movement. We hope our story of a woman ﬁghting and overcoming sexual predation will inspire many women – young and old – to declare “Time’s Up!”

As calls to think about “America First” give rise to anti-immigrant venom, we also hope our portrait of Chinese immigrants who helped make this country great will inspire Americans to appreciate the riches of our cultural, ethnic and racial heritage. 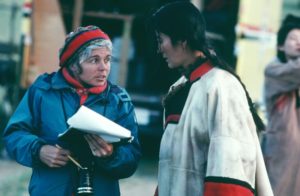 Nancy Kelly
A native of North Adams, Massachusetts, Nancy Kelly is self-taught. As a public health educator, she was hired to produce five short dramas about how to drink responsibly. Having fallen in love with filmmaking, she quit her job and moved to the high desert on the California/Nevada border. Though she had never ridden a horse or made a documentary, she learned to do both, making her living as a ranch hand while she shot A Cowhand’s Song and Cowgirls. Both films won awards. Kelly discovered Ruthanne Lum McCunn’s novel Thousand Pieces of Gold while touring with Cowgirls, and immediately saw it as a narrative feature. She and Kenji Yamamoto, her husband and filmmaking partner, spent six years financing the film with support from American Playhouse Theatrical Films, CPB, Film Four International and private investors. She participated in the Sundance Institute Screenwriting Lab with Thousand Pieces of Gold.

Although Kelly’s career as a movie director stalled — the victim of sexism that stymies the career of so many women — she continued to direct documentary films, including Rebels with a Cause, Downside UP, Smitten, and Trust: Second Acts in Young Lives. She is currently developing When We Were Cowgirls, a feminist adventure story loosely based on her own experiences as a ranch hand.

Kelly’s work has been supported by the Ford Foundation, John D. and Catherine T. MacArthur Foundation, ITVS, National Endowment for the Humanities and California Humanities. She has won artist-in-residence fellowships at Yaddo, UCross, the MacDowell Colony and the Banff Center for the Arts. When not in production, she teaches filmmaking at the California College of the Arts