You are at:Home»CinéEqual»Naila and the Uprising at Human Rights Watch Film Festival

“Naila and the Uprising” a film by Julia Bacha is scheduled to screen at New York Human Rights Watch Film Festival on June 16th.

Naila and the Uprising: When a nation-wide uprising breaks out in the Occupied Palestinian Territories, a young woman in Gaza must make a choice between love, family, and freedom. Undaunted, she embraces all three, joining a clandestine network of women in a movement that forces the world to recognize the Palestinian right to self-determination for the first time. Naila and the Uprising chronicles the remarkable journey of Naila Ayesh and a fierce community of women at the frontlines, whose stories weave through the most vibrant, nonviolent mobilization in Palestinian history – the First Intifada in the late 1980s.

At Cinema Without Borders we had a opportunity of interviewing Julia Bacha on camera.

While the First Intifada provides the backdrop for Naila and the Uprising, its lessons transcend that particular time and place. Through the experience of countless women engaged at all levels of society, we learn what is possible when women take the lead in struggles for rights and justice — from a movement’s inception to peace talks — and what we lose when they are stripped of their roles. Echoing struggles around the world, we also witness the tremendous power of nonviolent organizing: women’s committees, drawing on all the hallmarks of civil resistance, were able to mobilize hundreds of thousands through massive street rallies, mobile health clinics, underground schools and concerted boycott campaigns, sustaining the uprising while generating indigenous self-sufficiency. In Naila and the Uprising we see how women-led civil resistance can stir the masses, put pressure on power-holders, and affect real structural change. 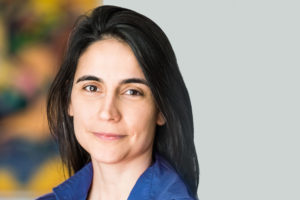 Julia started her filmmaking career in Cairo, where she wrote and edited Control Room (2004), for which she was nominated for the Writer’s Guild of America Award. Control Room became one of the highest grossing political documentaries of all time and introduced Americans for the first time to the inner workings of the Arab satellite channel, Al Jazeera. Subsequently, she moved to Jerusalem where she co-directed, wrote and edited Encounter Point (2006), which followed Palestinians and Israelis who risked their lives and public standing to promote an end to the occupation and the conflict. Encounter Point premiered at the Tribeca Film Festival, won best documentary prize at the San Francisco Film Festival and was broadcast on Al Arabiya to millions of viewers.

Julia then directed and produced the critically-acclaimed Budrus (2009), which chronicled the story of a Palestinian community organizer who united all Palestinian factions and Israelis to save his village from destruction by Israel’s separation barrier. Hailed in the New York Times as “this year’s must-see documentary,” the film successfully shifted the way international media covered the protests, as confirmed by an independent media-audit by Edelman PR.

Subsequently, Julia directed and produced My Neighbourhood (2012), which follows a Palestinian teenager struggling to reclaim his home in East Jerusalem from Israeli settlers. The film premiered at the Tribeca Film Festival, was released online by The Guardian and won the coveted Peabody Award.

Most recently, Julia directed Naila and the Uprising (2017), which chronicles the remarkable journey of Naila Ayesh whose story weaves through the most vibrant, nonviolent mobilization in Palestinian history — the First Intifada. Julia received a Guggenheim Fellowship to produce the film, which had its US premiere at DOCNYC, European Premiere at IDFA and Middle East Premiere at the Dubai Film Festival. It is slated for broadcast in 2018 as part of the PBS series Women, War and Peace II, Executive Produced by Abigail Disney.

Julia’s work has been exhibited at the Sundance, Berlin and Tribeca Film Festivals, broadcast on the BBC, HBO and Al Jazeera and screened at widely diverse settings, from Palestinian refugee camps and villages to the halls of the American Congress and European Parliament. She has been a guest on numerous television shows such as Charlie Rose and UP with Steve Riskin on MSNBC, and her work has been profiled on The Washington Post , Der Spiegel, The Economist and Haaretz among many others.

She is a Term Member at the Council on Foreign Relations, an Advisory Board Member to the Tribeca Film Institute, and a Young Global Leader at the World Economic Forum. Her TED talk, “Pay Attention to Nonviolence,” was selected as one of the best talks of 2011 by the TED curators and has been viewed by over half a million people worldwide.