You are at:Home»Feature Story»Me and My Dad wins GoE Bridging The Borders Award at Polish FF

Cinema Without Borders announced Me and My Dad, directed by Alek Pietrzak as the winner of GoE Bridging The Borders Award for the Best Polish Short Film at the Polish Film Festival, Los Angeles.

The opening Gala and award ceremony of the 19th Polish Film Festival, LA was held on October 17th at the Egyptian Theater, Hollywood.

The video below is a brief look at the award ceremony and announcement of the GoE Bridging The Borders Award winners:

Bijan Tehrani, Editor in Chief of Cinema Without Borders and Susan Morgan Cooper, filmmaker, Activist, announced the GoE Bridging The Borders Award winners by reading the jury statement at the award ceremony: ”

This film illustrates the struggle facing immigrants standing on that bridge between their New Country which affords promise and opportunity and one’s longing for the familiar love and the culture of their Old Country.
The honorable mention sponsored by Go Energistics of the Bridging the Borders Award goes to the film Sweet Home, directed by Kuba Radej.

A son slowly learns how to deal with his father’s Alzheimer disease.Clinging to the rare glimpses left of his once virile dad, the son learns a deeper understanding of the man he calls Dad.This film is authentically directed and poignantly acted. Sponsored by Go Energistics the Bridging the Borders Award goes to the film Me and my Dad, directed by Alek Pietrzak”

We had the opportunity of talking to Alek Pietrzak , director of the Me and My Dad about his winning film: 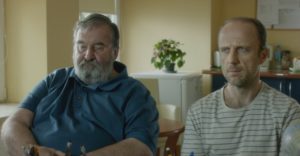 Bijan Tehrani: Is your film based on real characters that you know or a personal experience?
Aleksander Pietrzak: I did not based this film or any personal experiences nor real characters. The main characters are made up by me and my co-scriptwriter. We have done a big research, internet, books, we`ve met many people who took care of the Alzheimer sick patients or family members, listen to their stories and learn from them to make our characters and story. Of course, there are many scenes, jokes, sentences that are the same or similar to the stories we have heard over the research, but main dramaturgy, conflict, and characters were fully constructed.

BT: Alzheimer is becoming a common problem for older generations in our time, did you do an study about conditions of Alzheimer patients? Your film is very convincing about it.
AP: Thank you. It was our goal to be convincing and our goal was to show this problem but in a light way. To be convincing – again – research, research, research… We have had many meeting with neurosurgeon and psychiatrist to make it believable. I know a lot about this problem, but the date changes every year. I know also that for example Bill Gates set up a foundation to look for a cure.

BT: How did you develop the characters of your film?
AP: It was a mathematical job for us. We knew that we need a conflict. We knew that the hardest job is to keep someone who suffers from Alzheimer`s at home. It’s very challenging. We also knew that the sickness kills your memory. So, we came up with the character (Edward) who in the past had a huge responsibility – He was a captain of an international trade navy ships. He must have been traveling around the world a lot, so his kids hadn’t seen him often. Now, when the grown-up son wants to catch up with the father for the lost time from the past, Edward is forgetting about who he is. It’s a fight with a time. We wanted to build a conflict around that.
BT: You have an interesting visual style for your film, how did you come up with that?
AP: We got the money for the movie from the 30 minutes short film program in Poland called Munk`s Studio. We had to do a 30 minutes movie, not a second longer, but our story was longer, so we came up with an idea to do the Voice overs and put some old pictures to tell the story like the elements of memory. We liked that idea and we ‘had pushed it further, so it’s not only at the beginning of the movie (when we introduce characters faster and funnier) but also further in the movie. We wanted to have a light independent comedy-drama style not limited by film language barriers. That was our goal.

BT: Telling a story about the sophisticated relationship of a son and father and make it believable is always challenging, especially in a short film format, how did you overcome it?
AP: I think the voice over helped us a lot and the things I have mentioned above – not limiting ourselves with the film language/storytelling barriers. That helped us create a shortcut to the story, so we haven’t wasted time to know what’s going on and who there are (characters), what`re their need – we jump right into the relationship and the heart of the story. But the most important thing was a good casting, so the actors can lift the characters from the page to real life.
BT: How did you go about casting your film?
AP: Casting is one of the most important things for me as a director. I am very meticulous about it. It’s at least 75% of my job to cast well. If the text is good and its well casted then you win. I have a dream list – a list of actors I would love to work with, and Krzysztof Kowalewski who played Edward along with Łukasz Simlat were on that list. That`s a list of the best actors in Poland, for me of course, and when I see a chance that a role that I am trying to create will be interesting to the X or Y from the list, then i contact their agents and I try my luck.

BT: What do you think about the part that Polish Film Festival, LA can play in presenting the Polish cinema and its talents in Hollywood?
AP: It’s a great opportunity for the films and filmmakers to show their movies in the most influential film place in the world. It`s a huge honor, and I am very happy that there are people in Hollywood who work hard to promote Polish cinema and its talents.

BT: Please tell us about your future projects
AP: I have just finished my feature film debut called Julius. It’s in Polish cinemas right now. For next projects I have few ideas. Two for film and two for series. I also develop few projects with polish networks. All of them have a mix of comedy and drama in it – I feel like it`s a way I want to continue.