You are at:Home»Conversations»Matthew Vaughn: “When the world’s bad, people need to be uplifted’

Few people have had an as varied career as Matthew Vaughn. Having started as a producer, Vaughn has gone on to direct numerous well-received films, including British crime thriller Layer Cake, fantasy adventure Stardust, controversial black comedy Kick-Ass, superhero blockbuster X-Men: First Class, and — of course — Kingsman: The Secret Service.

However, one thing Vaughn has never tackled is a sequel — until now. Kingsman: The Golden Circle marks Vaughn’s first time returning to a franchise as director (he acted as producer on Kick-Ass 2 and X-Men: Days of Future Past). So what drew him back to this project in particular?

“We loved the characters,” he says. “And we wanted to continue the storyline, carry on giving these characters story arks and expand the world we created. But I wanted to make a film that’s worth making rather than a sequel that’s just a sequel.”

Vaughn always knew that meant not going the classic Bond route of resetting the story each time. Despite all the comparisons, Vaughn — along with writing collaborator Jane Goldman — wanted Eggsy’s story to continue, using the Empire Strikes Backand Godfather II as inspiration. 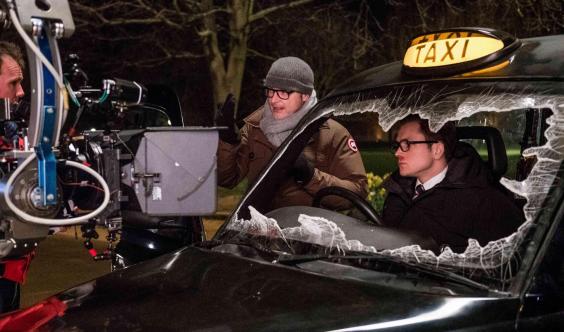 Matthew Vaughn directing on the set of Kingsman: The Golden Circle (FOX)

“If I wanted to make a Bond movie then I would go and make a Bond movie,” he says bluntly. “When we made the first film, everyone compared it to either Austin Powers or Bond. But Kingsman’s Kingsman. It’s just fun and entertaining. A celebration of spy films, English culture, and everything I like.”

Despite the controversy — and multiple interviews dedicated to defending the moment — Vaughn decided to double down with The Golden Circle, once again including a scene likely to aggravate. Mid-way through the film, at Glastonbury music festival, the protagonist Eggsy has consensual sex with another character, but non-consensually plants a tracking device inside her vagina. 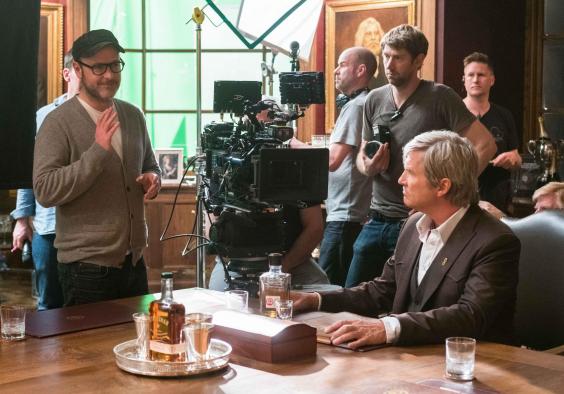 Matthew Vaughn and Jeff Bridges on the set of Kingsman: The Golden Circle (FOX)

“I can’t help myself. Once I get prodded I’ll prod back. I was laughing and thought no one has done a shot like this before. We figured it out and thought ‘let’s do it’. Right now the world has become so sterilised. For just one second, I want people to go ‘Oh my God’ or laugh; to find it funny or not laugh and move on. How many movies do you watch and go ‘I’ve just wasted two hours of my b****y life, can I have it back?’”

Vaughn has a point. For the last decade, directors have focussed on replicating the ‘dark’ and ‘gritty’ cinema made popular by Christopher Nolan. Even superhero films — a genre once dominated by campy, spandex wearing characters — has become grounded and more serious.

“When Nolan — who I’m a big fan of — first rose to fame, and when Casino Royal came out, the world was in a good place. Art normally opposes what’s happening in the world. When the world’s good, art becomes more serious and downbeat. When the world’s bad, like now — ten years after those movies came out — you have the opposite. You need to be uplifted. We’ve done darkness now. It’s become boring.”

There are few films Vaughn has worked on that could ever be considered boring. Aged 27, he produced Guy Ritchie’s Lock, Stock and Two Smoking Barrels followed two years later by Snatch. Both were exceedingly well received, shooting them to international fame.

While promoting Lock Stock back in 1999, Ritchie spoke to The Independent about Vaughn, two things in particular standing out from the interview. First, there’s Ritchie’s remarks about future wife Madonna (“The press got it wrong about her. It was Matthew she fancied, not me, and he’s fancied her rotten for years”). The second is Ritchie explaining how Vaughn was “more business-minded” than creative.

“Back then, I really was the business partner who enabled everything he needed to happen,” Vaughn says 18 years later. “He was meant to direct Layer Cake but couldn’t. My wife said ‘why don’t you have a go?’ I thought she was crazy, but then the writer — JJ Connolly — asked the same. I thought long and hard. It was a risk, but for some reason I said I would do it. It wasn’t part of the plan and I’m still amazed this is my job. Luckily, I’m enjoying it!”

Taking on Layer Cake was a much bigger risk than you may suspect. Failing to make a decent film would leave other directors not wanting Vaughn to produce their films. On the other hand, succeeding would lead to directors thinking Vaughn was a backseat director rather than producer.

“The producer thing is weird now,” he says. “When I was a producer before, it was a producer’s comment. Now, directors are thinking ‘does he want to be director?’ A producer’s job is to enable a director’s vision. There’s a certain amount of clarity. I’ve blurred those lines, so it’s much harder being a good producer.”

One example of where things became particularly difficult was on Fantastic Four. Vaughn produced the 2015 version of the superhero franchise, which was directed by Josh Trank. Unfortunately, the final project was a particularly awful mess, something Vaughn openly admits.

“The bottom line was I was asked to get involved and help,” he says. “I gave all my notes, which were then ignored. When I tried to help, I was ignored. I told them: ‘I’ve tried my best and good luck, prove me wrong.’ Sadly, I wasn’t. The things I was worried about were actually bigger and worse than I initially thought. It was an interesting process because Fantastic Four is a great IP, it should have been a live action adaptation of The Incredibles.”

One thing Vaughn insists is learning from those bad experiences: “The moment you find filmmaking easy is the moment you should retire. It should never be easy.If you rest on your laurels the creativity dies.” One example given is Age of Ultron, the Marvel superhero film directed by Joss Whedon which Vaughn calls “too long, too much going on, and too big.” The issue, he says, comes when directors have unlimited amounts of money: “That’s when there are problems, particularly when you have so much money to throw at everything. You spend your way through it.”

That’s not to say Vaughn’s never had the luxury of working with almost unlimited pockets. The 2011 production X-Men: First Class had an estimated budget of $140 million, rising stars Michael Fassbender, Jennifer Lawrence, and James McAvoy all starring. Before then, though, the director’s projects were slightly more risky, particularly 2010’s Kick-Ass.

Starring Nicolas Cage, Aaron Johnson, and a 13-year-old Chloë Grace Moretz, the black comedy was independently financed, no studio believing an R-Rated superhero film would actually have an audience. Against all odds, Kick-Ass succeeded, grossing $96.2 million. Despite this, another six years passed until a major studio actually produced another R-Rated superhero film: Deadpool.

“I would have liked to have had half of Deadpool’s box office,” says Vaughn. “People weren’t ready for an R-Rated superhero film when we released Kick-Ass, so we broke the ice. So, I’m extremely jealous but well done them. If we can all do well together that’s great!”