This is an interview with director Maryam Goormaghtigh, who enthralled audiences in the ACID section at 2017 Cannes with her light comedy road movie Before Summer Ends, 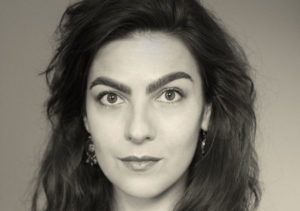 Cineuropa: You have Swiss, French and Belgian nationality (and have Iranian roots through your mother), you were born in Geneva and studied at the INSAS in Brussels. Does this mix of cultures influence your work as a filmmaker?
Maryam Goormaghtigh: For this film I think it did yes, because I started working on it after wanting to reacquaint myself with Iranian culture, which I didn’t know a lot about. I was born and grew up in Switzerland, and didn’t learn Farsi. I started having Farsi lessons and it was kind of down that road that I met my three characters. I heard them speaking Farsi in a bar in Paris and empathized with them. I was drawn to these characters straight away, and our encounter was a warm one. My camera slowly but surely became a key part of our meetings. I started filming them very quickly and carried on doing so for four years. The film came together very quickly, I filmed it in two parts over three weeks, although I actually filmed these people for three to four years.

Before Summer Ends [+] is a perfect mix of documentary and fiction. Did you consciously avoid restricting yourself to certain “labels”?
I don’t think I ever really thought about it. I didn’t make the film thinking: I’m going to make a documentary or a fictional film. I didn’t have any constraints because I didn’t really have any production costs. I didn’t have a screenplay to write. I set off on an adventure, in a bit of a wild way. The film came together rather spontaneously, and I think that in life too, we spend a lot of time navigating between fiction and reality: we have different hats that we wear, we play a role. One of my actors told me that if anyone ever asked him whether he was acting or not, he wouldn’t know what to say. We were all in a state of total vagueness. We made a film, there you have it!

The film is impressive with its personal yet universal feel. How did you work with the actors to get that result?
In all these years that we’ve known each other, I’ve filmed them as you would a documentary to some extent. I asked a lot of questions about the roads they’d gone down in their lives, etc. I filmed them and then afterwards, used the material to “write” the film. I knew for example that at some point in the story, I wanted the audience to find out a bit more about one or another of the characters. I give the audience avenues of exploration. For example I would ask one of the characters to put this or that question to the others and film it. I knew roughly what I wanted to portray, but didn’t know how it would take shape. Everything I film is real, it’s spontaneous. They pick up two hitchhiker musicians but don’t know them at all. I wanted to film that encounter. They had to do their bit, but what surprised us all is that in the end they went with the flow as did the girls. They offered me huge scope for improvising with reality and even at times to induce it.

What are your influences and what advice would you give to anyone wanting to become a director?
As far as this film is concerned, I didn’t really have any influences or other films in my head as I made it. I watch a lot of films but I didn’t on this particular occasion, it was the characters themselves who inspired me. There are a lot of filmmakers I hold in great esteem, who make their films in a very free way and on their own, like Alain Cavalier and Abbas Kiarostami for example. They are people with very brave working methods. If I had to cite any references, I would mention the film Days and Nights in the Forest by Satyajit Ray, a sort of huis clos with a group of boys, and Le plein de super by Alain Cavalier, which is also a road movie with a group of thirty-somethings. If I had to give one piece of advice to a young filmmaker, it would perhaps be, and I don’t know if it’s even very good advice, to work as I have done, because I did everything backwards. I did the filming, then I started looking for funding, and then I waited until I’d finished filming to re-write certain scenes. I think it’s the best way to stay free. Today cameras aren’t that expensive. I made my film all by myself. I think it’s possible, you have to trust your instincts and not get too wrapped up in technique, which isn’t all that important at the end of the day.

By Muriel Del Don for Cineuropa