You are at:Home»Conversations»Mark Pellington talks about his music videos

It is almost over three years that I had the privilege of meeting Mark Pellington in person and interview him for his amazing body of work in narrative feature filmmaking and creating  many of the best music videos of our time. Mark is a very kind and humble artist and human being. (Bijan Tehrani)

I asked Mark, if he wants to pick his top 5 music videos which ones he may choose:

Mark Pellington is an American filmmaker, photographer, and artist. He was born in Baltimore, Maryland, the son of Bill Pellington, a linebacker who played football with the Baltimore Colts for 12 seasons. 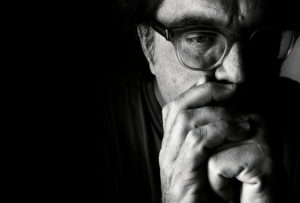 Mark graduated from the University of Virginia in 1984, with a B.A. in Rhetoric. He attended on an athletic scholarship, playing attack on the Varsity lacrosse team.

He worked at pioneering video channel MTV from 1984–1990, winning awards as a promo producer and co- creating the landmark TV documentary series Buzz (1990).

He became a freelance director in 1988, directing music videos for U2, Malcolm McLaren, Crystal Waters, De la Soul , PM Dawn, and Pearl Jam. His video for Pearl Jam’s “Jeremy” won four MTV awards in 1993, including Best Director and Video of the Year, and his video for Whale’s song “Hobo Humpin’ Slobo Babe” won the inaugural MTV Europe Music Award for Best Video in 1994.

He directed the landmark mini-series The United States of Poetry for PBS in 1995, which won the INPUT (International Public Television) Award, AIDS awareness doc film Red Hot and Dance (1992) and created the look of pilots for hit network TV shows including Blindspot, Red Widow , The Enemy Within and Cold Case, as well as numerous commercials, personal documentaries, art projects and short films.

The Last Word (2017), with Shirley MacLaine and Amanda Seyfried

Pellington lives in Los Angeles with his daughter and runs his company Prolific Films.