You are at:Home»News»The man who knew too much, leaves our world

Oh, God, it should have been over a half century since the last time that I met Manuchehr Shamsaei. Manuchehr was the lighting engineer in National Iranian Radio and Television, a brilliant  artist. Back then I was working as a film director at NIRT and also writing film critics for several publications. With Manucher we shared love for Italian 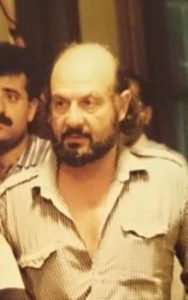 cinema and at any opportunity we would talk for hours about films and I was always surprised by his rich knowledge of arts. Many times our favorite topic was lighting in Michelangelo Antonioni films, and I have to admit that I learned a lot from him. You should have seen Manuchehr Shamsaei working on the set! He was dedicating all his focus and attention to his work as a lighting engineer, regardless of the how small or big was his project. He was treating the first time directors with the  same respect that he would with a famous and experienced one. I loved to stay back and watch him setting up the lighting in the studio, he was like conductor, conducting the orchestra of the lights, to play a beautiful silent piece of visual music. During his years in NIRTV, Manuchehr Shamsaei worked in more than five hundred TV shows and he trained many talented  lighting engineers for Iranian entertainment industry. Manuchehr was loved by all the people that he worked with and his forever magical smile of kindness was his trademark.

Manuchehr Shamsaei will always be remembered as one of the masters of his ntrade and before leaving our world he has passed the torch of art to his daughter Mojdeh Shamsaie, a great actress who has married to the Iranian legendary filmmaker Bahram Beyzaei.