This year’s program celebrates over 100 films and special events from 23 countries, including 15 narrative feature films, 6 Feature Documentaries and 79 short content projects including international short films, Documentary shorts, Experimental films, Music Videos, Films for Kids and a Virtual Reality lounge. An ever-growing Made In Baleares section presents a record breaking 25 films produced and directed by the most talented filmmakers from the Balearic Islands.

Evolution Mallorca International Film Festival (EMIFF) is one of the fastest growing and exciting film festivals in the Mediterranean. An excellent hub for networking with some of the brightest minds in filmmaking, EMIFF is as intimate and invigorating as it is breathtakingly gorgeous.

Filmmakers and industry professionals visit this island paradise to discover “the next great generation of filmmakers” The festival presents a diverse selection from world premieres to film festival favorites, short film screenings, Q&As, a Drive-In Cinema section at the Philip Stark designed Port Adriano, an Art & Cine event at the Gerhardt Braun Gallery and Industry events such as the Producers Club at the modern museum of contemporary art Es Baluard.

Said EMIFF Founder and Executive Director Sandra Seeling Lipski, “EMIFF is more than a film festival; it provides a forum for cultural understanding and enriching educational opportunities, focusing on showcasing a diverse collection of both local and international independent films.”

“For seven days and nights, EMIFF invites you to join us on a journey to far away lands, intimate stories and unexplored realities. With the intention to encourage positive change, EMIFF’s films will push your limits and raise your consciousness. Our goal is to bridge cultures and build a stronger and more purposeful community. I believe we have to recognize each others individual stories and dreams in order to realize, that at the end of the day, no matter where we are from, we are not that different from each other.”

“I am particularly excited for our Evolution Honorary Award and Evolution Vision Award recipients this year, globally acclaimed actors Marisa Paredes and Mads Mikkelsen. Ms. Paredes has captivated generations, known around the world for her work over five decades, including captivating audiences in her work with Spanish master Pedro Almodóvar. Her extensive and prolific career is defined by a body of international films defined by risk and prestige.”

“Melissa Leo is a singular independent spirit, and has built a career playing a range of eclectic and fascinating women, immersing into her characters completely and gifting the audience with truthful and charged performances every single time. The Evolution Icon Award celebrates her trailblazing achievement as an actress and her unshakable independent spirit in today’s international film Industry,” said Lipski. 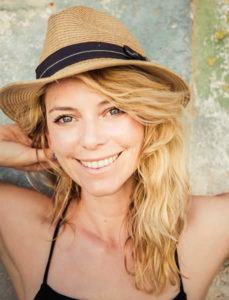 Born in Berlin and raised in Palma de Mallorca, Sandra is an award-winning actress, filmmaker, and festival director with a unique international background and experience, currently based in Los Angeles and Palma de Mallorca. She is fluent in English, Spanish and German.
Her earliest passion was acting, and after working professionally as a teenager in Europe, she studied acting at the Lee Strasberg Theatre School in New York City. She then moved to Los Angeles to pursue her acting career, and begin her filmmaker career as well. She graduated from the Los Angeles Film School with a degree in Directing and Producing in 2012.
In 2012 she founded the inaugural Evolution! Mallorca International Film Festival, with the goal of creating a world-class, destination film festival in the Mediterranean that celebrates innovative independent cinema amidst the natural beauty of Palma de Mallorca.
Now in its 6th year, Evolution! Mallorca International Film Festival (EMIFF) is one of the fastest growing, most respected and exciting film festivals in the Mediterranean. EMIFF is based in the heart of Mallorca’s buzzing and culturally rich center of Palma. An excellent hub for networking with some of the brightest minds in filmmaking, EMIFF is as intimate and invigorating as it is breathtakingly gorgeous, with gala screenings in spectalucar venues and settings, and unique opportunities for industry professionals to network. Filmmakers and storytelling enthusiasts visit this island paradise to discover “the next great generation of filmmakers”
This year’s EMIFF will include screenings, networking events, panels, and workshops every single day with up-and-coming filmmakers, established industry professionals as well as the general public interested in arts, film and culture.