You are at:Home»CinéEqual»Making a Killing: Guns, Greed, and the NRA – a MUST see

“As an American-Iranian filmmaker I spent most of my life outside the U.S., therefore I had no idea how it is to live under the shadow of gun violence. When I moved to California 30 years ago, I tried hard to understand the love for guns. I tried to understand why people needed guns at home. I was told that this is our 2nd Amendment right and it is part of U.S. Constitution, so it is sacred. I also never understood why constitutions cannot be rewritten; why we think they are untouchable. There are many old and fanatic beliefs that have resulted from parts of the U.S. Constitution and they may not be applicable to our time. Yes, I was scared for the lives of my family. I was scared that, one day, gun violence could happen in a school that my kids were attending, or later, in their workplace or in any place that a lunatic with a gun starts to shoot the people.

I hate it. Politicians, after any gun violence incidents, only offer their thoughts and prayers. All the blood and all the wasted lives of innocent people never touch them. Then I learned about the National Rifle Association and I knew that it’s blood money that silences our representatives in Congress and in the Senate. As time passed, I was concerned about everyone, not only my own family. I started to have nightmares. I saw shadows with guns killing people and the number of these shadows growing, covering the whole world. I was at the brink of letting my fear take over when I encountered Making a Killing: Guns, Greed, and The NRA, an amazing, shocking and powerful documentary about gun violence from Brave New Films, directed by Robert Greenwald. The film addresses all my fears and concerns about gun violence. I’ve now watched this film a number of times and with each viewing, I discover something new in it. Every time, it makes me sad. Every time, it shocks me. But also every time it gives me hope that there may be a light at the end of the tunnel. I strongly suggest that you watch this beautiful film, and I’m sure it will touch your heart.”
Bijan Tehrani

At Cinema Without Borders & CineEqual, we had the opportunity of interviewing Robert Greenwald for a podcast about Making a Killing: Guns, Greed, and the NRA:

Making a Killing: Guns, Greed, and The NRA tells the stories of how guns, and the billions made off of them, affect the lives of everyday Americans. It features personal stories from people across the country who have been affected by gun violence, including survivors and victims’ families. The film exposes how the powerful gun companies and the NRA are resisting responsible legislation for the sake of profit – and thereby putting people in danger.

The film looks into gun tragedies that include unintentional shootings, domestic violence, suicides, mass shootings and trafficking – and what we can do to put an end to this profit-driven crisis. Through this film and campaign, Brave New Films will work with partners to fight for a country where public safety is more valued than profit.

Robert Greenwald is founder and president of Brave New Films, a nonprofit film and advocacy organization whose work is distributed for free in concert with nonprofit partners and movements in order to educate and mobilize for progressive causes. The work of Brave New Films has been screened around the world and viewed over tens of millions of times and counting.

Brave New Films engages the most pressing issues of the day by presenting documentaries that tackle current events from a progressive perspective. 16 Women and Donald Trump is a viral video launched in November 2017 to highlight President Trump’s extensive record of sexual misconduct. It has reached over 7 million users worldwide and forced the president back on his heels. The group also investigated Trump’s mental health and cabinet. 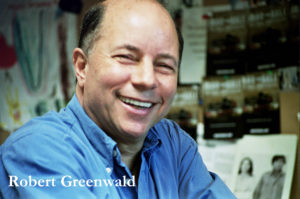 Brave New Films has explored immigration issues in recent films, including Immigrant Stories: Doctors and Nurses, which exposes the health implications of anti-immigrant policies; Immigrant Prisons, which explores conditions inside America’s system of private, for-profit immigration detention centers; and No More Detention: Pastor Noe is Free! which helped free a beloved Los Angeles pastor who was swept into the immigrant detention vortex. The studio has also worked with coalitions in California and New Jersey to end the unjust money bail system and has produced a series of short films about America’s broken bail system, including The Bail Trap: American Ransom. The series includes Breaking Down Bail; Tai’s Story: College of Bail?; Deal with the Devil, How Much is Your Freedom Worth?; and Lessons for the Nation: New Jersey’s Cash Bail Overhaul. Brave New Films has also explored mass incarceration in the United States. Their most recent film, Sentencing Reform: Drug Addiction, looks at alternatives to jailing Americans struggling with addiction through a treatment model based in Seattle, WA, that can be scaled nationwide.

Other recent, issue-based short-films include: Racism is Real, which shows the stark differences between life in America as a black man and as a white man; a series on how vulture hedge funds contributed to the financial crisis that has devastated health care and education in Puerto Rico; a look at how the private probation system preys on low-income people in To Prison for Poverty; and an animated short on the Treatment Industrial Complex – the private prison industry’s effort to capitalize on the drive to end mass incarceration.

Greenwald’s most recent full-length feature documentary, Making a Killing: Guns, Greed, and the NRA (2016), illustrates the connection between gun industry profits and gun deaths in America and has been screened thousands of times for free at schools, libraries, faith institutions, businesses and more. His previous feature-length investigative documentaries include Uncovered: The War on Iraq (2004), Outfoxed: Rupert Murdoch’s War on Journalism (2004), Wal-Mart: The High Cost of Low Price (2005), Iraq for Sale: The War Profiteers (2006), Rethink Afghanistan (2009), Koch Brothers Exposed (2012), War on Whistleblowers (2013) and Unmanned: America’s Drone Wars (2013).

Before launching Brave Films in 2000, Greenwald produced and/or directed more than 65 TV movies, miniseries and films as well as major theatrical releases. His early body of work includes Steal This Movie! (2000), starring Vincent D’Onofrio as 60s radical Abbie Hoffman; Breaking Up (1997), starring Russell Crowe and Salma Hayek; A Woman of Independent Means (1995) with Sally Field; and The Burning Bed (1984) with Farah Fawcett. His work has earned him 25 Emmy Award nominations, two Golden Globe nominations, the Peabody Award and the Robert Wood Johnson Award. He was awarded the 2002 Producer of the Year Award by the American Film Institute. He has been honored for his investigative film work by the ACLU Foundation of Southern California; the Liberty Hill Foundation; the Los Angeles chapter of the National Lawyers Guild; Physicians for Social Responsibility; Consumer Attorneys Association of Los Angeles; Los Angeles Alliance for a New Economy and the Office of the Americas.