The entire story takes place in less than a day, and in one location, in a middle-aged woman’s house, where she has been living there alone. All her attachments to life are 4 picture frames of the men of her life. One from her husband, a man who once supported Mossadegh (the democratic prime minister of Iran in 1950s that his government was overturned by a CIA coup in 1953), but after many years he goes to Hajj while drinking alcohol privately (forbidden for Moslems). Also there are two picture frames of her sons, one from his son that had been a fighting on the Iraq war front (he had been a religious extremist) and had been martyred, and the other one from his other son that had studied and graduated outside Iran and is planning to go back to Iran. He opposes the ruling regime as an intellectual. The fourth picture frame belongs to her brother, a man with communist tendencies that has been executed.

This can be a diverse face of all Iranian men, and a woman who pays the price of her men’s wishes! This woman is neither a hero nor a brave person… actually because of her memories from different times of her life that security forces had invaded her house, she has turned to be very conservative person. In the 2009 people’s uprising, some protesters shelter at her home and stay for a while and then leave, but the woman scared of possible attack of security forces to her house, gathers anything that to her is a suspicious document and puts them all in a trash bag. (That’s why the title of the film is Lovely Junks)

The film is interesting in terms of form and content, but this game of pretending to address the societies problems to release the existing pressure and redeem people unhappiness is not working anymore. These tricks are not functioning as they are known by everyone and they are just turned to be a cliche. 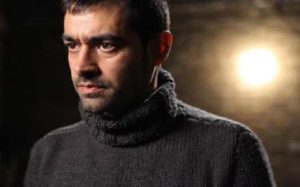 Even the form of the film is interesting, but it’s very boring. (The pictures come to life and transform into the characters.) The whole movie happens in just one location and is full of unnecessary shots … Of course judging the movies that had been band by censorship is not easy as many scenes from the film could have been eliminated, for example, I did not understand the reason for the presence of Negar Javaherian, and so on.

Saber Abar and Shahab Hosseini performances are excellent like in most of their other films. But picking Abdi to play the father did not make sense to me. Hedyeh Tehrani had a short but impressive part. Shirin Yazdanbakhsh’s performance was fine but did not come close to her acting in Life + 1 Day. Habib Rezai’s performance wasn’t that great.

Cinematography and lighting were at the service of telling the story.
The sound recording of Mahmoud Samaqbashi like his other work as a sound engineer was great.
Contrary to the word of mouth praising this film, it did not meet my expectations. But I had to see it

And I was leaving the theater I had this question in my mind: “can it be true that all the men in a women’s life could just live in picture frames.”
*
Director: Mohsen Amiryoussefi
Screenplay: Mohsen Amiryoussefi
Editor: Mostafa Kherghepoosh
Sound Engineer: Mahmoud Samaqbashi