Inspired by the 2005 riots in Paris, LES MISÉRABLES – directed by Ladj Ly – follows Stéphane (Damien Bonnard), a recent transplant to the impoverished suburb of Montfermeil, as he joins the local anti-crime squad.

Working alongside his unscrupulous colleagues Chris (Alexis Manenti) and Gwada (Djebril Zonga), Stéphane struggles to maintain order amidst the mounting tensions between local gangs. When an arrest turns unexpectedly violent, the three ofﬁcers must reckon with the aftermath and keep the neighborhood from spiraling out of control.

LES MISÉRABLES is France’s selection for the Best International Film Award for the 2020 Academy Awards.

Bijan Tehrani: What did motivate you to make LES MISÉRABLES?
Ladj Ly: I wanted to bring the focus on what I have been living through in my neighborhood. People talk a lot about these neighborhoods and projects but none of them have gone there to see it for themselves. I wanted to establish the truth and reality of these places.

BT: In LES MISÉRABLES you do not show any kind of sympathy towards any of the characters, you are stepping aside and witnessing what is going on
LL: I wanted to be quite sincere and truthful and do the justice towards what was happening, and I did not want to put any judgments on anyone or taking any sides. I wanted to portray the reality of these locations and the reality of the life there. And everybody has a good side and bad side so it’s not the matter of black or white.

BT: The world of LES MISÉRABLES is quite unknown to us and almost no one could have imagined that something like this is going on in the heart of Paris, but can this be applied to what is happening in other parts of the world?

LL: People are touched by what they see in this film and they identify with that they know this kind of stuff is happening in other countries too. Usually you hear about this kind of neighborhoods when they are discovered by a politician but what they say is quite far from reality and I wanted to show and reestablish what is really happening there.

BT: How did you go about casting of LES MISÉRABLES?
LL: All the kids in the film or the kids that are actually living in the neighborhood that I know them personally so about 80% of the film is cast by real people and except for the three cops and the woman, that are professional actors the rest are amateurs. I did not encounter any problems while shooting in location because I had been filming there for 10 or 15 year in the same neighborhood as I knew everybody there. There were almost 200 people that were participating in the movie.

BT: How did you come up with a visual style of your film it looks like unique
LL: Since the age of 16 I was shooting videos by any camera that I could have my hands on until at the age of 17 when I had my own camera and I continued shooting and shooting and coming up with a documentary style filmmaking

BT: Do you think your film could bring any kind of a Awareness in France so that solutions are found for crisis like this?
LL: My part was to show the conditions in these neighborhoods and it’s up to the politicians to find a solutions for the crises like this and actually the president of France has seen this film and was quite touched by the it and he’s trying to find some ways to resolve the issues that we have I have mentioned in LES MISÉRABLES.

BT: How do you see their chances of LES MISÉRABLES to get a nomination or win the best international film Oscar?
LL: I have no idea. We will go up to the end, but it doesn’t depend on us anymore. 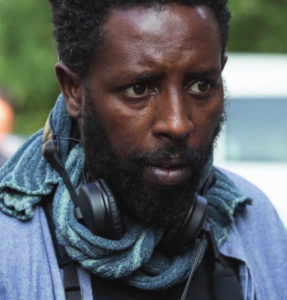 Ladj Ly is a native of Montfermeil (Seine-Saint-Denis), best known for his attention-grabbing web documentaries that depict the realities of social and political life. He began his career as an
actor and member of Kourtrajmé, a collective created in 1995 by his childhood friends, directors Kim Chapiron and Romain Gavras.

Ly went on to direct his ﬁrst short ﬁlm, Montfermeil Les Bosquets in 1997. In 2004, he co-wrote the documentary 28 Millimeters with renowned photographer JR, best known for his large format street photographs posted on the walls of Clichy, Montfermeil and Paris. After the 2005 Paris riots, Ladj was triggered by the death of two youths, Zyed Benna and Bouna Traoré, who were hiding in an electricity substation in Clichy-sous-Bois, and he decided to ﬁlm his neighborhood for a year to make a documentary entitled 365 Days in Clichy-Montfermeil (2007). He continued his work on documentaries, and in 2014 directed 365 Days In Mali, which spotlighted a region in turmoil where militias and Tuaregs were preparing for war. In 2016, Ladj directed Marakani in Mali, an advert for the international solidarity NGO Max Havelaar France.

In 2017, he directed his ﬁrst short ﬁlm, Les Misérables, which was Césarnominated in 2018 and a prize-winner at the Clermont-Ferrand Short Film Festival. That same year, he and director/writer Stéphane de
Freitas co-directed the documentary A Voix Haute, also nominated for a César award. Les Misérables is Ly’s ﬁrst feature ﬁlm, inspired by his original short.