You are at:Home»Feature Story»Happy  Anniversary, Leonardo!  An Italian town Reinvents the Genius of Da Vinci

CASTELFIDARDO, Italy – When they’re not publicly feuding with the French over whether the Mona Lisa should be returned to their madrepatria, Italians are busy this month flaunting their “love for Leonardo” with plenty exhibits, concerts, movies and menus to mark the 500th anniversary of Da Vinci’s death.

There are retrospectives of his work as a scientist, architect, mathematician and humanist, movies on life’s work, handsome displays of his sketches of inventions found in his half-dozen cryptic notebooks, or codexes – even of a lock of his hair, prior to DNA testing.

But one of he most ingenious homages to the eclectic polymath, who died in France on May 2, 1519, at the age of 67, is the brainchild of a middle school here near the Adriatic in the sleepy hilltop town of Castelfidardo, best known as the birthplace of the accordion. 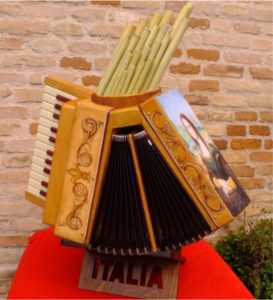 Six months ago, the music students and teachers from Castelfidardo’s Paolo Soprani middle school decided to take, literally, a page from one of Leonardo’s notebooks and recreate one of his more mystifying inventions.

They found their subject matter buried within the Codex Madrid II notebook, in a small sketch that hardly stood out among all of Leonardo’s other inventions, many of which changed the world: the helicopter, the calculator, the parachute and the diving suit, the 33-barrel canon (a.k.a. machine gun) and the giant crossbow, to name a few.

The students’ choice depicted a new and bizarre musical instrument, as strange as any of Da Vinci’s instruments of war and flight. It was composed of a keyboard, a bellows, and a clap-trap of stubby organ pipes shooting out from the top.

Leonardo, it seemed, had sketched the world’s first design for an accordion, some 350 years before the instrument was officially invented… Or more precisely, a design for a portable organ, an organetto, the progenitor of the modern accordion.

Using only the small rough sketch and the guidance of two determined music teachers, the students set out last October to recreate Leonardo’s instrument from scratch, in time for celebrations this month.

The first step was to find someone to show them how to design and build the prototype. They contacted Victoria Accordions, one of the largest and most respected of a handful of remaining accordion factories in Castelfidardo.

”The kids needed a teacher, and our store and factory is only 200 meters from the school, so I said why not?” said Elke Ahrenholz, who with her husband Riccardo Breccia runs Victoria and has formed a craft academy to teach accordion making to enthusiasts around the world. “It was just a perfect fit, Leonardo and Castelfidardo.” 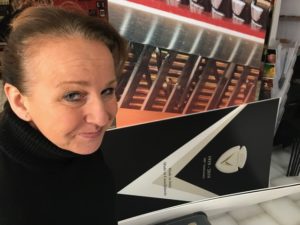 In fact, accordion factories and accordion shops are everywhere Castelfidardo. The instrument is integral to the town’s origin story, which credits a local farmhand, Paolo Soprani (yes, the school is named after him) with the invention about 160 years ago.

Some of the students’ parents are accordion makers themselves, part of a local tradition dating back to Italy’s wars of unification, il Risorgimento, that gave birth to Italy as a nation-state in 1861. Played around kitchen tables to help rally Italy’s rag-tag peasantry to rout the Papal armies (the bloody Battle of Castelfidardo was fought here), accordions were not only a means of entertainment but a form of musical resistance, and as such became welded to Italy’s new identify as a young and free country.

While the town’s accordion museum in the main square already hosts a prototype of Leonardo’s portable organ, Ahrenholz and the school wanted to create a modern, playable accordion inspired by Leonardo, rather than the portable organ that had already been realized.

“The motivation for the project was to focus the kids on creating something new, to become part of the story of Castelfidardo.” Ahrenholz said. “And from a business perspective, by the creation of a new instrument we wanted to promote the idea not only of ‘Made in Italy’ but especially ‘Made in Castelfidardo.’” She added that the town plans to seek patent protection for the latter moniker. 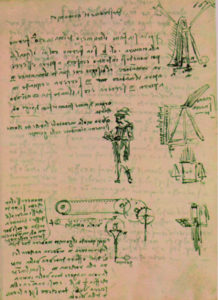 That legal aspect is important for the town, because in recent decades accordion craftsmen, whose products are painstakingly hand-made over a period of months, have faced an existential threat from the mass-production of cheap, low-quality accordions from rival markets, particularly China.

“We’re trying to ensure that our craft is protected, and a patent can help us achieve that,” Ahrenholz noted.

To prepare their student project, the school and town officials also connected with the violinmakers of Cremona, a town in Lombardy famed for its craft of violin making. “They were our role model, because they had already gotten together some years ago and established their own brand, ‘Made in Cremona,’” Ahrenholz said.

In classes held twice a week for six months, Ahrenholtz tutored her new students on all matters of the craft of accordion making, from creating the technical designs to cutting the wood and carving the reeds. It was no simple task, considering the modern accordion is composed of more than 8,000 parts. Ahrenholz and Breccia’s oldest son Martin, a university student in engineering, even designed the valves.

Altogether, they would build a different kind of accordion from anything that’s been built before. 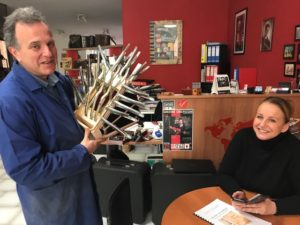 “This is the first accordion in the world that plays in only one direction, where all the reeds are one side,” said Breccia, who overseas the running of Victoria’s factory, just down a cobblestone street from its showroom. “While you still push and pull the bellows, they have a valve system allowing constant air flow in one direction only. The difference is that in the Leonardo sketch it is played with organ pipes. In our version we have put in accordion reeds.”

Only the complicated bellows section was left to the experienced hands of the factory professionals, “in order to get the accordion finished in time” for the Da Vinci anniversary ceremonies, he said.

Those celebrations have included a class trip to the town of Amboise, France, where on May 2nd, , 500 years to the day from Da Vinci’s death, the students and teachers debuted their new accordion in a special concert at the artist’s gravesite.

Earlier stops on their trip included an orchestral concert at the Palasole in Bellano near Lake Como, where Da Vinci was active as a cartographer, and a in Amboise in the Manor of Clos-Lucé, where he lived during the last three years of his life. The students also plan to release a CD of pieces played on their new accordion, and next year will invite their French hosts to visit Castelfidardo.,

Meanwhile, in July, Victoria Accordions will hold its own celebrations, marking the company’s 100th anniversary with a variety of concerts, presentations and banquets.

And like their new creation that the students debuted in France, Victoria’s accordions will boast a new and polished logo, “Made in Castelfidardo.”

“It will be a busy year for all of us in our little town,” smiled Ahrenholz. “I think Leonardo would have been proud.”